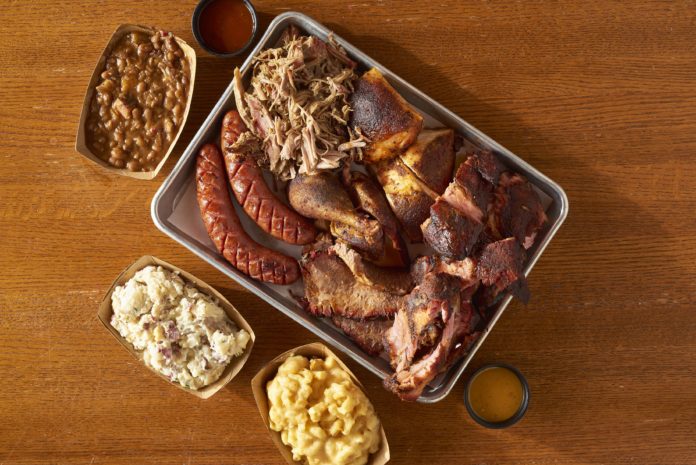 Five-time World Barbeque Champion Pitmaster Myron Mixon brings his unique flavor and competition-style Q to Hoboken with the opening of Myron Mixon’s Pitmaster Barbeque. This is Myron’s second outpost of the eponymous spot (the first is located in Old Town Alexandria, VA) and offers guests the opportunity to enjoy his award-winning smoked meats in a classic roadside-style venue.

Myron Mixon’s Pitmaster Barbeque occupies a 1,300-square-foot space on Washington Street in downtown Hoboken, allowing seating for up to 42 guests indoors, plus picnic tables outside that can accommodate up to 12 additional guests. The restaurant offers counter-style service, with guests placing their order, and then either sitting and having their food dropped via a number system or taking it to go.

The menu features all of Myron’s award-winning favorites, including standouts like beef brisket, pulled pork, and house-made sausage, all of which are available on a plate or in a sandwich, and all of which are smoked in-house daily. A variety of wings, ribs, and whole chickens round out the protein offerings. For mean accompaniments, guests can choose from an array of sides like baby back mac and cheese, Brunswick stew, peach BBQ baked beans, and more.

To finish off their experience, diners can opt for banana pudding or a chocolate chip cookie. Myron Mixon’s Pitmaster Barbeque also offers beef brisket and pulled pork sliders for the little ones, as well as the family meal (shown at top), which includes half of a smoked chicken, a half-pound of pulled pork, a half-pound of beef brisket, a half rack of baby-back ribs, two sausage links, and three sides. It serves three to four people, for $70. All meat is also available by the pound.

As a five-time world barbeque champion, Myron Mixon is the “Winningest Man in Barbeque,” the chief cook of the Jack’s Old South Competition Bar-B-Que Team, the mayor of Unadilla, GA, and chef/partner in Myron Mixon’s Pitmaster BBQ in Old Town, Alexandria, VA, and now Hoboken, NJ. On TV, Myron is the executive producer and host of BBQ Rules, host of The Smoked, and star of two other hit shows: BBQ Pitmasters and BBQ Pitwars, on Discovery’s Destination America.

In 2013, he was inducted into the Barbecue Hall Fame in Kansas City. In 2018, he was awarded the Carolyn and Gary Well Pioneer of Barbecue Award by the Jack Daniel’s World Championship Invitational Barbecue.

All major credit cards and cash are accepted. Delivery and takeoutut orders can be made online or over the phone. Myron Mixon’s Pitmaster Barbeque also offers private parties and catering. Hours and menu items are subject to change.

Photos are courtesy of Dhanraj Emanuel.