The writer was invited to visit De Novo and the meal was complimentary.

A cool, airy, elegant atmosphere surrounded guests on Sunday, June 9, as they attended a soft-opening cocktail reception for De Novo, a new European-style pub in Edgewater. Owner Demetri Malki and Executive Chef Adolfo Marisi greeted family members, friends, and associates, who enjoyed an afternoon of gourmet hors d’oeuvres and libations against a backdrop of panoramic views of the Hudson River. The restaurant opens to the public on Wednesday, June 12. 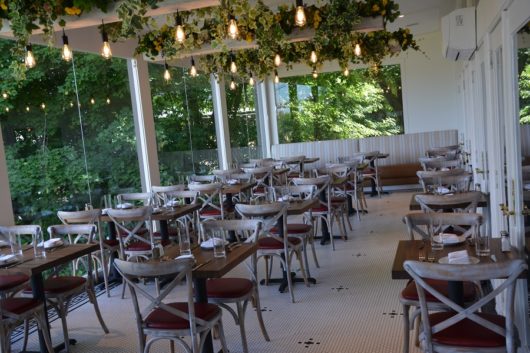 Malki is reapplying the culinary success of his gastropub of the same name in Montclair, which will celebrate its fifth anniversary in July. The new De Novo, surrounded by luxury residential towers in this northern Bergen County town, looks well positioned to draw patrons that might otherwise be inclined take the ferry to New York City in search of a romantic dining experience.

“This is my new baby,” Malki said with a smile as he anticipated the challenges of opening the new pub. Speaking philosophically, he is most interested to see how the establishment’s dining rooms will “talk” to the kitchen; in other words, how customers will interact with the menu, atmosphere and wait staff and provide feedback to help guide the pub’s initial efforts.

Events and the Menu

One pleasant surprise for Malki thus far has been the strong demand for booking receptions, social affairs and family parties at the pub. He said this interest apparently is an extension of a business tradition established by Le Jardin, the restaurant that previously occupied this spot in Edgewater.

Chef Marisi said the menu will feature refined Mediterranean-style Italian and French dishes along with homemade pasta, breads, and gelato. Born in the Abruzzo region of Italy, Marisi learned his craft while working at restaurants in the glorious Renaissance city of Florence.

The Edgewater menu, most likely, will be similar to the selections offered at the Montclair pub: seafood, steaks, salads, flatbreads and assorted pasta dishes. De Novo in Montclair—adjacent to the Upper Montclair train station on New Jersey Transit’s Montclair/Boonton Line—has garnered its share of multi-star reviews over the years.

The hand of fate steered Malki to Edgewater. Emboldened by the success of his Montclair business, he was looking to open a new establishment and originally had his sights set on a spot in Morristown. However, after 10 months, the negotiations broke down. “It just didn’t happen,” he recalled. Last October a friend suggested that he should visit the Edgewater property, and Malki immediately became enamored with the location. Business discussions quickly followed and within three months he closed on the deal. “It was meant to be. It almost happened by itself,” he said.

A 2000 graduate of Montclair State University, Malki said he helped put himself through school by working long hours as a bartender and waiter. He’s the first member of his family to seek a career in the restaurant business. Demonstrating his skills as an entrepreneur, one year after earning his college degree he opened his first restaurant, D’Metri’s, and then four years later launched Table 8. Both were located in Montclair.

De Novo, designed by New World Design Builders, based in Clifton and Manhattan, has spacious dining areas, large picture windows, and a long bar area for social interaction. The Edgewater location is in the process of constructing a new outdoor patio.

The bar is large and well-appointed with a sleek marble counter, a plethora of spirits and wines and eight beers and stouts on tap, including Guinness, Samuel Adams, Allagash White, Stella Artois, and Saranac. The pub’s signature cocktail is Fig in the City—fig vodka, cranberry juice, and sours. 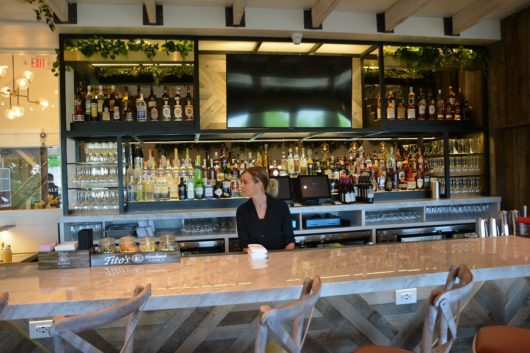 Edgewater Mayor Michael J. McPartland attended the cocktail reception and expressed his delight in the De Novo vibe. “They’ve done a beautiful job here,” McPartland said. “This will be a wonderful place for Edgewater.”