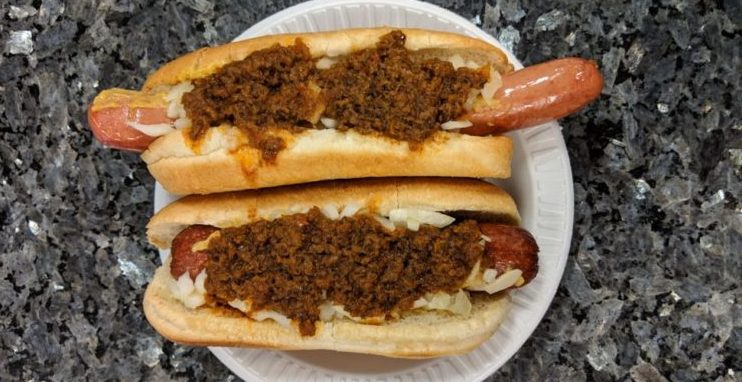 For the uninitiated: It’s a beef and pork frankfurter slathered with mustard, topped with diced white onions, and dressed with a sweet no-bean chili. Sound off to you? Well, it’s inexplicably awesome. The flavors all work together to create a true delicacy. And, despite the name, the Texas Weiner is actually a New Jersey phenomenon!

I’ll tell you where to find some of the best Texas Weiners after a brief history lesson. Or, if you’re in a rush, you can scroll straight to the restaurant reviews at the bottom.

A Word is Born

A vaguely referenced “Greek gentleman” from Paterson gets the credit for naming this hyperlocal food. Some say that man was John Patrelis, who first sold Hot Texas Weiners from a cart outside a hotel in 1920. His stand no longer exists, but luckily the name he invented does.

Before you ask: Yes, ‘e before i’ is the preferred misspelling for weiner throughout New Jersey. And, yes, it’s still the same style recipe wherever you can find Texas Weiners sold today.

Patrelis may have called his concoction the Hot Texas Weiner to evoke the spicy flavors of the Lone Star State. Plus, associating his product with cowboys and the romantic ideals of the old frontier was probably a good business move. It might have made it sound more appetizing to his customers than listing the ingredients. Today, the name still conjures a sense of the American character in the imaginations of eaters across New Jersey.

It’s called chili, but the primary condiment of the Texas Weiner isn’t your typical chili con carne that you’d find out West. Instead, it bears more resemblance to saltsa kima, or beef sauce, the preferred topping for macaroni in Greece.

Greek saltsa kima is similar to an Italian bolognese in texture, but distinct in taste. It has a flavor sculpted by seasonings that includes cinnamon, nutmeg, allspice, and cloves. Tomato and ground beef add savory flavors that round out the sweetness of the spices. The mustard and onions are essential when serving a true Texas Weiner, but really, it’s all about the chili sauce.

This kind of Americanized Greek chili is hardly unique to the Garden State. The Texas Weiner is just one iteration of a much larger trend of Americanized saltsa kima in the twentieth century. It’s part of the larger story of Greek immigrants, their food, and the American dream.

A large influx of Greek immigrants arrived in the United States between 1880 and 1915. As they settled around the country, they often found jobs in the burgeoning restaurant industry. This included diners, chili parlors, and hot dog stands, largely due to the low barriers of entry to the work.

Some of these workers eventually found success and became entrepreneurs themselves. They opened their own carts, diners, counters, and stands. In turn, they would hire a new wave of Greek immigrants to help run their operations. This pattern established a booming, self-fueling cycle of Greek-owned and staffed restaurants throughout the U.S. over several decades.

These restaurants were clustered in blue collar, working class, industrial cities. Factory workers looking for a cheap and quick meal on their lunch break made up the customer base. In Paterson, for instance, you’d likely see silk textile workers ordering a couple of Texas Weiners to go. They could eat and run back to work before they were late.

Customers scarfed down the fast food in a hurry. A local lingo even developed for quickly ordering, cooking, and delivering the food. “One, all the way, one, no onions,” was a lot more efficient than, “Two weiners, one with chili, mustard, and onions, and the other with chili and mustard, but no onions.”

The faster one customer ate, the faster the next could take his seat. An organized business could sling up to 500 hot dogs in a regular lunch hour. You do the math. Anyone eating at these places could see that this was a way to get rich–it was the American Dream in action. Large numbers of immigrants ventured into becoming business owners. More and more people followed suit in different cities.

Logically, they served food that resembled the flavors from home, particularly saltsa kima. And just like the Texas Weiner, they often named their product after a place that naturalizing Americans would easily recognize. Often, a unique parlance developed around ordering and cooking the food to increase the speed of the process. These traditions all remain in various forms today across the country.

If you were to actually go to Texas and ask for a Texas Weiner, they’d probably look at you funny. That’s just what we call it in New Jersey. In most of the rest of the country, the same product goes by different names. Why?

The apocryphal story has to do with those same Greek immigrants in the early 1900s. Many came through Ellis Island to enter the country. Once in New York, they would visit the amusement parks and boardwalk along the beach at Coney Island in Brooklyn. They’d eat at some of the earliest hot dog stands in America, including the wildly popular Nathan’s Famous. For millions of people, hot dogs on a bun were suddenly synonymous with New York.

As the story goes, more than a few people who passed through picked up on a good idea. They saw throngs of people at the hot dog stands, sometimes three or four shoulders deep at the standing room only counters. They would sell frankfurters to try and make their own fortunes as they settled in different states.

Eventually, someone thought to slap some saltsa kima on the franks to give an otherwise commonplace product an original twist. Who did it first and where they did it is up for debate. However, the idea spread in several places at once. Copycats simultaneously popped up serving similar products all over the country.

The enduring style was born into existence, but it went by many different monikers. The common element among them, though, was their naming after American cities. No doubt, this was with some patriotic flair as part of the immigrant assimilation process.

The Texas Weiner is our local version. The Keros Brothers from Detroit called it a Coney Island at their famously competing stands in 1917. It was there in the Motor City where the term Coney Island took firm root and spread to the mid-west. In fact, most of the country calls it a Coney. Rhode Island refers to it as the New York System Hot Weiner. In upstate New York, somewhat confusingly, they call it a Michigan. Ladle it on spaghetti in southwestern Ohio and now you’ve got yourself some famous Cincinnati Chili!

There are two places you should check out to try some Texas Weiners in New Jersey. Each one offers a taste of history in a setting that complements the food.

Libby’s Lunch is an iconic restaurant that has been serving up Texas Weiners since the Great Depression. They serve their dogs true to the original Paterson style. Ordering “One all the way” is the local custom if you want chili, mustard, and onions. The sauce is a thin, flavorful liquid–a dark chili that drips over the edges of the bun. It binds the sharp tastes of the onions and mustard to a puffed up, deep fried Sabrett’s weiner. 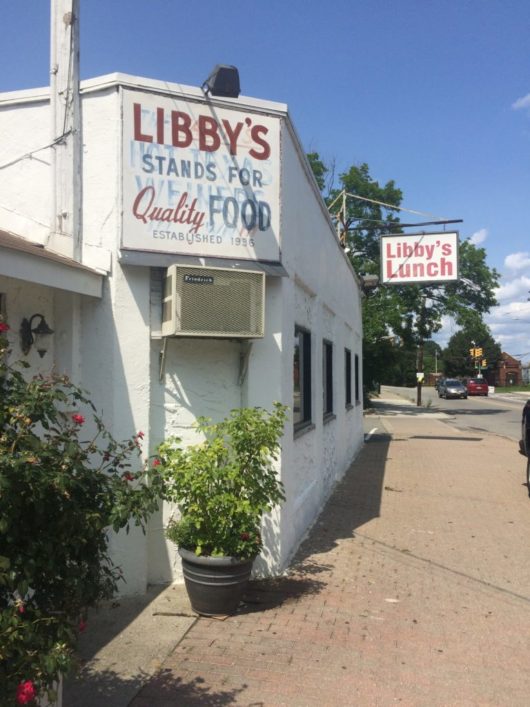 Heidi Psarros and her family have been running Libby’s since the early 1980s. She’s proud to have the last standing Texas Weiner spot in the immediate area, noting that other Paterson classics like the Olympic Grill and the Falls View Grill have disappeared over the years. “What does it mean if you’re the last one left?” she asks with a grin.

You’ve got a choice in frank when you get there, but you should go for the extra large dog. It hangs off the edges of the bun and is absolutely worth the extra few cents that it costs. Walk off your meal by strolling to the nearby waterfalls. Alexander Hamilton first saw the industrial potential of the United States here back in the 1780s. If you’ve got more time, spend the rest of the day in Paterson checking out the nearby Paterson Museum. The Lambert Castle Museum is also a short drive away. 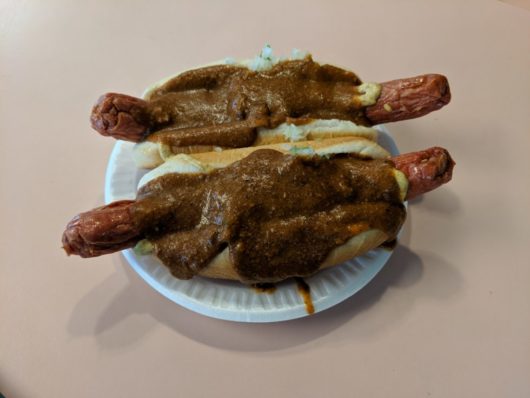 If you have a craving for more Texas Weiners, hop in the car and head South to Plainfield. You can seat yourself at the counter in the longest standing hot dog joint in the state. Original Texas Weiner I has been cooking Hot Texas Weiners since 1924. There’s a great hole-in-the-wall vibe here. Red vinyl stools, colorful walls and a checkerboard floor are everything you want in a classic lunch counter. 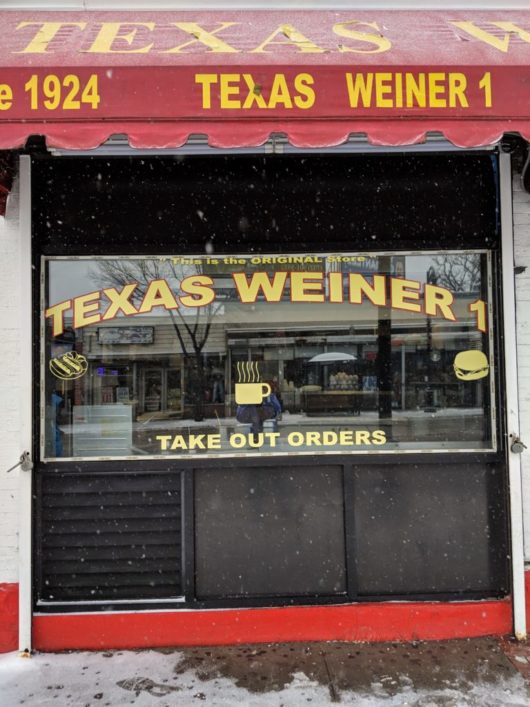 Of course, it’s the hot dog that counts. The Plainfield version of the Texas Weiner has all the same delicious components, but the presentation is slightly different. First of all, Original Texas Weiner uses Grote & Weigel Texan Brand franks. These are larger and curvier than the ones you’ll find in Paterson, and they lay on the griddle instead of going into the fryer. The other difference you’ll notice is that the chili is fluffier and less liquidy than you’ll find in North Jersey. 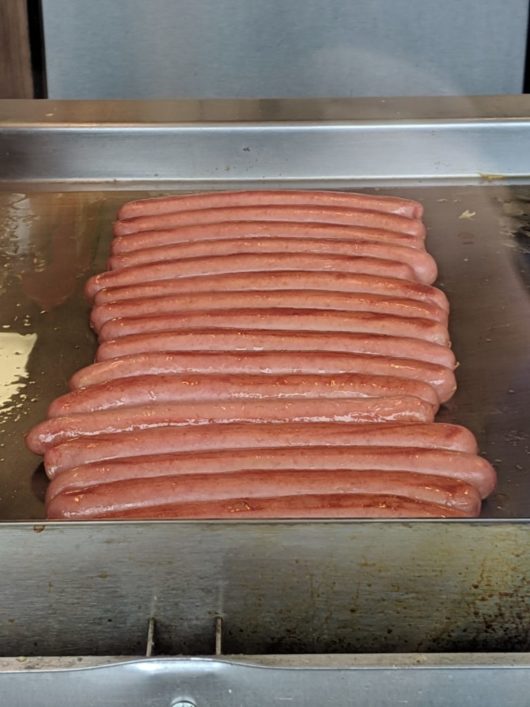 Sit and chat while you enjoy your meal with the Greek owners Vicki Pavlou and her husband Tom. He’s been working behind the grill for the last 40 years or so, ever since he was a young man. The two have a wealth of stories going back decades about the way things were back in the day.

I Never Sausage a Hot Dog!

New Jersey just so happens to be the hot dog capital of the world. Some of our roadside joints go back almost 100 years! Strange regional serving styles lurk in different pockets of the state. In fact, there are so many stops around here that it might take a series of blog posts just to give each one its due… Tag along with me as I eat too many hot dogs and write about them for Jersey Bites–Jersey style!