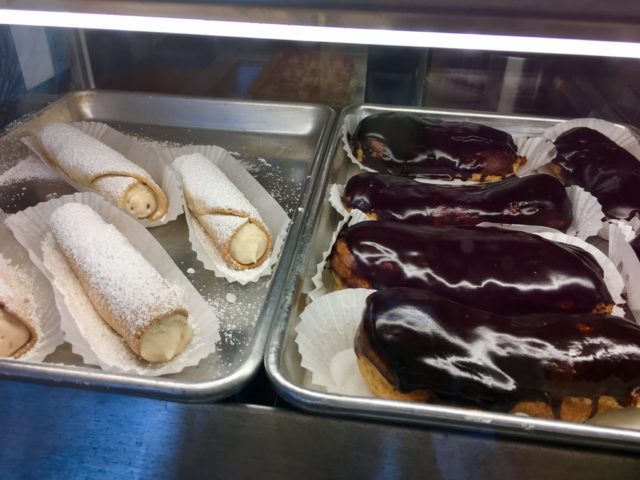 While owning a bakery and a restaurant—at separate locations—is sure to keep anyone’s schedule packed, Natalie Colledge, owner of Montclair’s Plum Bakery and Plum on Park, recently took the time to sit with Jersey Bites for an in-depth conversation. During our chat, I learned about Colledge’s experience growing up in and around her family’s bakery, the origins of—or motivation for—her “let’s do this” approach to seemingly everything, and her journey to a gluten-free life. 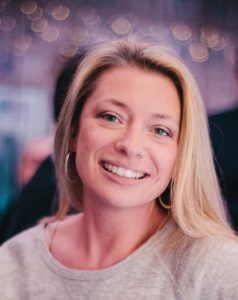 I was probably three. My father made these puff pastry, boat-shaped things, and it had either strawberry or cherry filling. I couldn’t reach the table height, but my father brought a chair and I stood on the chair and he gave me a spoon, and I put in the filling and pushed it off the spoon right into the pastry. I remember doing two of them and then all of a sudden my father was like, “Gotta move this along,” and he came up behind me and took a whole scoop of the filling and filled them all in like 30 seconds. But I was like, “Wow, I did this whole sheet pan!” To me he didn’t even do that—I did that whole thing.

When did you realize you wanted to make this a career?
Always. I went to college for something other than that, and I was just like, “What am I doing? This is not want I want to do.” I was pre-med.

Was there an “aha!” moment?
When I was almost finished with undergrad, I remember thinking, I really cannot imagine myself sitting in a lab, looking through a microscope. I wanted to create, and make, and move around. At that time, though, the baking part was just much more of a man’s world. The whole baker thing is such a European thing, and I’m 100% German. I worked with all men—that was my life. Also, this was 25 years ago: it was not really as common for women to be in the business, which it is today. It’s not uncommon to have full staffs of just women now.

Any interesting stories about where and with whom you started baking professionally?
I was 16 and my parents were in Europe. At the Styretowne Bakery, in Clifton, which is now my brother and his wife’s, there was [an issue] with the electricity. If the air conditioning and oven were on at the same time, all the power shut off. We had a rotating convection oven that fit 15 whole sheet pans at once, and it shut down. We had to get inside the control room of the oven and manually crank it to get everything out or it was going to burn. It was a Friday and it was really busy—there was a line out the door. All the sales had to happen without a register, and I was trying to get them all settled. I had to get all the bakers to continue doing what they were doing because rising dough doesn’t wait for anyone. If we’re no longer using machines, then fine, get out the rolling pan. It was just getting everything set within five minutes. Controlling like 15 people and 40 different batches of dough, and it’s like, “Alright, we’ve got this. Until the power comes back on, we can handle this.” That was the moment where I thought, I’m pretty good under pressure. I can handle this.

What is the greatest opportunity that has come to you as a result of baking?
It was about 15 years ago. My husband had a friend who had Celiac. And I had no idea what that was. He was coming over for dinner and I said, “What do you mean he can’t eat this or that? What can he eat?” And then I just started thinking about it more and thinking there’s plenty of things he can eat: meat, potatoes. But how boring! I want to make crepes for dessert! I lived in Manhattan at the time, and I bought books about gluten-free baking and was like, Oh, this is really exciting. When I started working with [gluten-free] flours, Whole Foods didn’t have Bob’s Red Mill. That wasn’t around [yet]. I had to go to different neighborhoods to get different kinds of flours. Chick pea flour was terrible. The flavor was just so strong in the bean. But here I’m making a loaf of bread and I’m thinking, I have to knead this dough, and I’m like, none of this is what I know, and it became so exciting. Baking is something that just works [for me]: I don’t know why, but I just know know what I’m doing and it works. I want a challenge. So I threw myself into it and tested it and then people started asking about gluten-free products in my family’s bakery. And I was like, “I know what you’re talking about!” And I started making breads at home and bringing them into the bakery. Because another thing [to keep in mind] is cross contamination. And I know from being in a bakery that at the end of the day you can run your finger across the counter and there’s flour. It’s airborne. It’s everywhere. So I made my home gluten free and at the time, I was just doing a couple of loaves and then I started doing other treats. I started making cupcakes and special orders for people, and then full cakes. I just became known as the person who made gluten-free products, [at a time] when you couldn’t find it anywhere.

You opened up your restaurant, Plum on Park, in 2010. How did that come about, and what were the first few years like?
The baking wasn’t a challenge anymore. I wanted to really cook. And my husband had recently been diagnosed with cancer. It was kind of like, “Life is short.” So I opened the restaurant. He passed away in 2012. After [a partner] passes away, as a caregiver, you don’t care about yourself. You don’t exist. Their comfort is your life. And I thought that my tiredness and lack of focus was because I had no time to myself. But after he passed, I just kept getting worse, to the point where my joints and hips were killing me, and I couldn’t sleep on my side. If I put my head up against this wall I would be asleep. I fell asleep at the restaurant and the manager was like, “I think you should go home.” I went to my regular doctor and he said I was depressed. And I’m like, “I am not depressed.” My husband wasn’t killed in a car accident; I knew what was happening. I was prepared as you can be. But that was the answer I kept getting. I went to a healer but when there’s not that MD stamp, you’re kind of like, “What does he know?” It was a lot easier to not listen to him. The things he was telling me to do, I was like, “I don’t have time for that.” Then one of my customers saw me sleeping at the restaurant with my head up against the window and I didn’t even know it. He gave me the name of a doctor and said, “This woman will know what to do—she’s an MD but she does holistic medicine now.” As soon as I got my blood work back, she said, “You need to come in right now. You have no vitamin B.” But I ate tons of leafy greens! It turns out that gluten stops absorption of the vitamin B that you would find in regular foods. My body didn’t convert it, and [as a result] I had toxic levels of some other things. She said extreme stress that brought it out and exacerbated it.

How did you respond?
A month later, I went to Paris for my 40th birthday, and there was no way I was going to Paris and not eating a baguette. After four days, I was in the hospital. My body was done. But I was probably eating a baguette and four croissants a day. After two weeks of not eating gluten, it was like the clouds had parted and the sun was shining and the birds were chirping: “Hallelujah!” I was like, “I’m never touching gluten again.”

Was that how you decided to open Plum Bakery?
When I opened Plum on Park [where all menu items can be made gluten free], I made gluten-free bread and pastries, which were for sale there. But I would make 12 cupcakes for the restaurant that day, and I would have one customer buy them all. Or I’d make four loaves of bread for the restaurant, which we were using not only for our sandwiches but for sale, and one person would buy them all. It was becoming too much. I was initially looking to just hire someone for baking—not to open up a bakery. And then on a drive to the post office two years ago, out of the corner of my eye, I saw a “Store for Rent” sign. I thought, This is great; this is small enough. It had been an upholstery shop. It was close to the restaurant, but it had to be a retail spot—it couldn’t just be a baking facility. So I thought, I did that bakery thing for 20-something years. I could do it again! It took nine months to open up, and on the first day, I remember looking out the window and wondering what would happen if there were an accident because there were tons of people outside, waiting to come in. I think we sold out by 10:30 in the morning. I never thought it would be that successful right away. I remarried in March 2016, and we’re [running the bakery together].

That’s wonderful. What ingredient do you always have on hand at home?
Butter. And really, really good olive oil. I go to the olive oil store on South Park Street. They have this Tuscan olive oil that’s phenomenal. But a friend of mine was in Tunisia and brought me back Tunisian olive oil which was probably the best olive oil I’ve ever had in my life. He said that a lot of what he heard during the tour was that a lot of the olives from Italy are from Tunisia. Your mouth was just like “Oh my God.” It was amazing. Phenomenal.

What is your beverage of choice?
Vodka martini.

What is your favorite comfort food?
Soft-boiled egg.

What New Jersey bakeries or bread shops do you love, besides your own?
I have to say my family’s bakery is one of the best. I know the quality of the ingredients that they use, but I can’t eat it because of my gluten allergy.

Is there anything else you’d like to tell us?
I get some lashing from some people [who say] I opened up the bakery because it’s a fad—that I just jumped on the gluten-free bandwagon. But actually I took almost 20 years of gluten-free knowledge and every single book worth buying. I’m not here to preach to you saying you have to do this. I’m here to offer an option for people who can’t have gluten or for the people who feel better without it. And I really think that it’s a huge world and there’s plenty of room for people to have their opinions. And if you want to eat wheat, go ahead, but don’t look at me weird because I can’t. When I ask if there’s wheat in there, please just answer me. There are plenty of places that don’t want to deal with it, and I get it. There’s a huge responsibility in saying, “We can do this, we can do that.” I’m not a scientist. I know how gluten makes me feel, and that’s all I need to know. I’m only here to answer for myself.