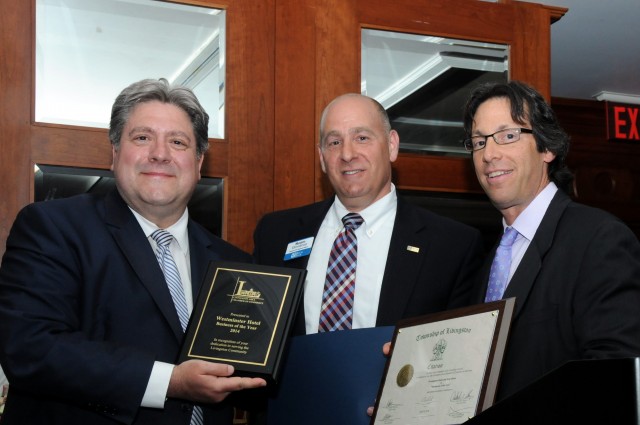 Last month, Livingston’s Westminster Hotel and Strip House Restaurant were named the 2014 Businesses of the Year by the Livingston Area Chamber of Commerce. The two businesses (which work hand-in-hand, as the Strip House is located inside the hotel) co-hosted a delightful and delicious awards reception on April 30. I checked in with The Strip House Restaurant’s Executive Chef, Bill Zucosky, and Westminster Hotel’s General Manager, Michael Polese, to find out about the secrets to their success. Oh, and I also had a dinner worth writing home about.

Executive Chef Bill Zucosky has high expectations all around, and his teams deliver. “I, as a chef, demand excellence—and get it—from our purveyors, kitchen team and front of house service team, all in order to ensure a stellar customer experience,” he said. “And the great reviews we’ve gotten over the years—not only from the press but from guests at our hotel and folks in the community—all of these underscore that commitment to excellence we have here at Strip House and Westminster Catering.”

Contributions and support don’t go unnoticed by the surrounding community, and these extra-curricular activities are a big factor in setting the Strip House apart from the pack. Zucosky explained, “We are committed to extending caring hospitality beyond the restaurant and into the community. We also dedicate time and resources such as great food and attentive service to support a positive change for the many causes we see as important, from St. Barnabas and Kessler Institute to Clara Maass Medical Center, and of course the Livingston Rotary.”

Zucosky named the Go Go Bread as his favorite Strip House menu item, describing it as “Cheesy, buttery garlic-ness my mouth adores and waistline despises!” But he also got down to business for the event, creating the following menu:

Westminster Hotel’s General Manager, Michael Polese, proudly accepted the award for the hotel, and looks forward to the coming months, as some greatly anticipated renovations will get underway later this year. “We are dedicated to Livingston and are re-investing in a multi-million dollar guest room renovation slated to begin in December 2014,” he said. “As leaders in the community, we are excited to unveil our new designs and affirm our commitment to growing our business in our fantastic hometown.”

Polese described the hotel’s range of approaches for supporting not only the local community, but statewide efforts that make a real difference. In addition to offering many local charities stays at the hotel, his team participates in local initiatives like Stuff the Bus, a collection of food, linens and many basic products that supported Ventnor after Hurricane Sandy, and is currently taking place to benefit CHOW (Community Hunger Outreach Warehouse). The hotel has also supported BRIDGES—a local shelter—with linens, blankets, soaps and shampoos—for many years.

Polese proudly described a hotel staffer’s own fairly recent—and incredibly brave—contribution. “In 2013, one of our employees, Nia Mallory, was named Citizen of the Year by the Livingston Police Department because her quick thinking led to an arrest of a car thief during an attempted robbery,” he said.

So what is Polese’s own favorite menu item from Strip House? “Well, I know it’s a steakhouse and I can happily inhale the rib-eye, but I am in love with the tuna tartare,” he said. “I have tried it at many steakhouses, but nothing compares to the absolutely delicious preparation from Chef Bill Zucosky.” We couldn’t have said it better ourselves.

Rachel Bozek is a writer and editor based in suburban Essex County. She loves interviewing chefs and restaurateurs—especially the ones who love New Jersey. She grew up in Bergen County, and has lost track of how much time she’s spent on LBI and in the Wildwoods. After graduating from James Madison University, Rachel spent 10 years at Nickelodeon, where she was an editor at Nickelodeon Magazine. Now she does a range of editorial work, including trivia writing for all ages, kid-friendly content, marketing research, and of course, Jersey Bites! Her other areas of focus include coverage of the optical industry and college magazine writing. Through it all, her search for the perfect pancake continues. You can find her on Twitter: @rachelbozek.