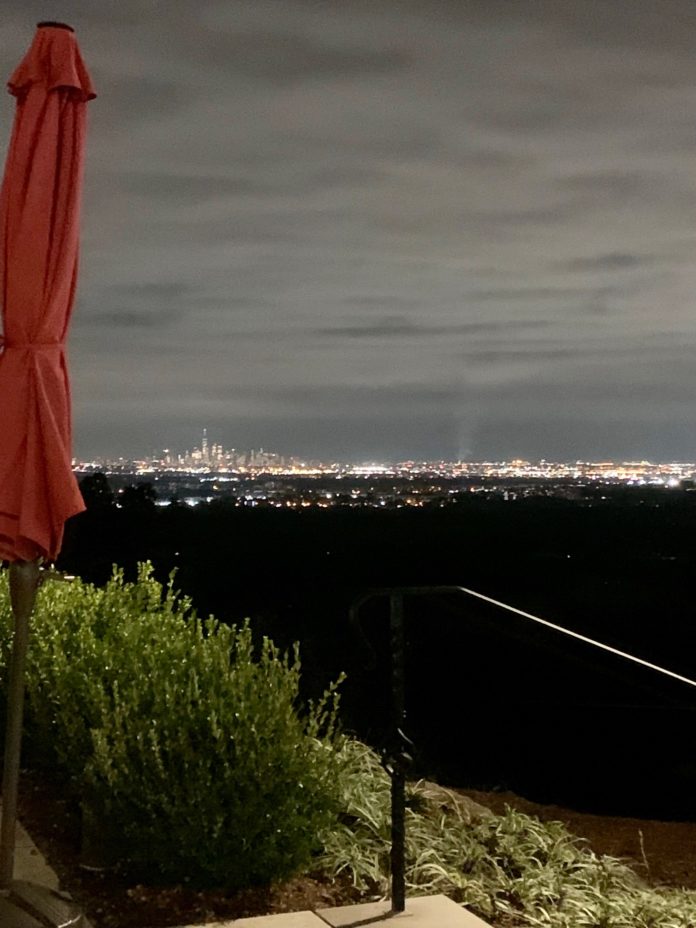 The writer was invited to visit the Highlawn and the meal was complimentary. 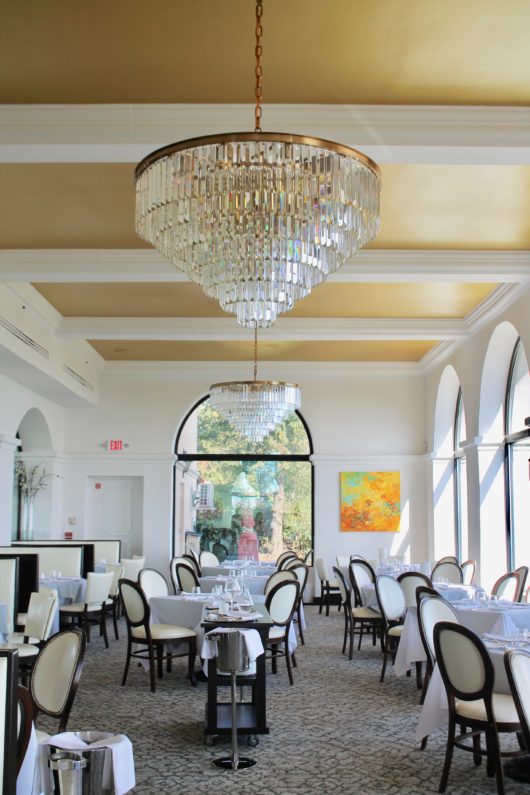 Sometimes you just want a cozy dinner in. Sometimes, though, you want to polish your heels, iron those fancy pants, and get out for a fabulous experience. After everyone’s last year-and-a-half of the former, I’m pretty sure we are all ready to take on the latter. I’ve got just the spot.

The Highlawn, in the former home of the acclaimed Highlawn Pavillion, recently opened its massive doors under the ownership of the Frungillo family. 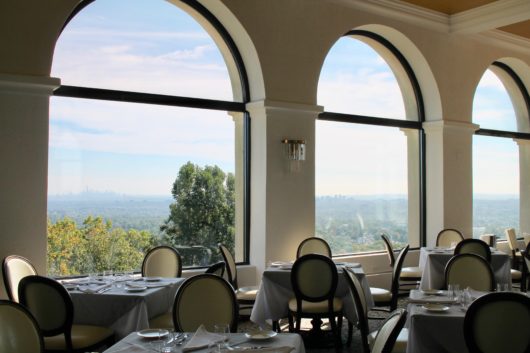 Perched atop Eagle Rock Reservation in West Orange, New Jersey, this newly designed space is not only a sight to be seen on the inside, but its breathtaking views of the New York City skyline—from almost every seat in the house, whether you’re at the bar, in the ballroom, or on the patio (see top picture)—are unparalleled.

An Experience to Remember

A good view can only take you so far, however, as the food has to bring its A game, too. After attending a tasting, with Executive Chef Sam Hazen running the show in the kitchen, I can confidently say that the Highlawn’s A game is in full effect. Here’s a look at my recent afternoon at this West Orange destination.

Before I sat down, Chef Hazen took me on a kitchen tour. Brimming with pride and joy, he praised his team and proudly described some of the kitchen’s key equipment. The “Ferrari of the kitchen” as he called it, is his open flame Grillworks grill. He continued, describing the rotating Nobile Attie pizza oven with the enthusiasm of a new parent.

As I meandered from one area to the next, I couldn’t help but notice just how organized and clean the expansive kitchen was. The attention to detail from the dated dry-aged steaks to the impeccably clean chef stations was quite evident.

Now for the food! If you’re lucky enough to try the new fall menu, a must order will be the seared foie gras over caramelized onions, which was followed, appropriately so, by a lighter selection: the house-made flatbread paired with a Vermont creamery butter. Unsalted butter speckled with coarse salt defeats me every time and this was no exception! Bread basket: 1 Me: 0!

An ahi tuna crudo soon arrived and it was a beaut. The vibrant Grade 1 fish, layered with briny Kalamata olives, salty parcels of ham lardo, and sweet orange slivers was truly an adventure to eat.

As I prepare to describe the next plate, I have to be honest: Oysters are not my thing. Even so, these grilled oysters, sourced from Cape Cod, set over tiny mountains of salt, were pretty delicious. Drizzled in an oreganata-style butter, they were on point in terms of both texture and seasoning.

The next few plates continued on this tantalizing, head-turning trend. Although I loved the Highlawn meatball, the 24-hour Bolognese over Calamarata was unreal. (I will be dreaming about it for the foreseeable future.) A blend of short ribs, pork collar, and veal shoulder, it tasted like no meat sauce I’ve ever had. It was truly beyond a Bolognese.

The grilled wild branzino was next to try. While you can have it served fillet only, I received the entire fish. Although it was a looker of a plate, I’d still go with meat only next time. Nonetheless, it was another outstanding dish.

Its skin literally crackled from being seared on a 900° F steel-top range, while the white flesh flaked apart with ease. And that Meyer lemon vinaigrette that dressed it oh-so-delicately? Spot on, Chef, just spot on! A prime dry-aged cowgirl ribeye was the last dish before dessert.

And while I love me a good steak, it was the sides that had me swooning. The whipped Parmesan potatoes were heavenly. Light as a feather yet rich in milk fat flavor, they are everything most of us are going for when we set our sides down at the Thanksgiving table.

Another noteworthy side dish was the roasted wild mushrooms. And while the mushrooms themselves were very tasty, it was the crispy garlic bread crumbles atop that made the plate for me.

The final course was dessert and it lived up to all of the standards set by the earlier components of the meal. Stunning, sleek, and scrumptious, each dish developed by Pastry Chef Joseph Gabriel was a dream for someone with a sweet tooth. The blueberry crumble-adjacent, homemade almond ice cream dolloped with an amaretto sabayon was a testament to Gabriel’s talent. 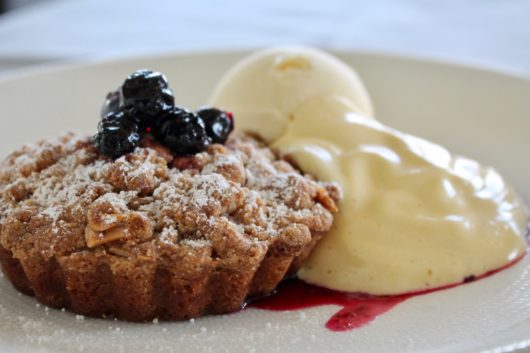 And let’s not forget about the cheesecake. I heart any and all cheesecakes but this one, NY-style with a cranberry pomegranate sorbet, was simply sublime. 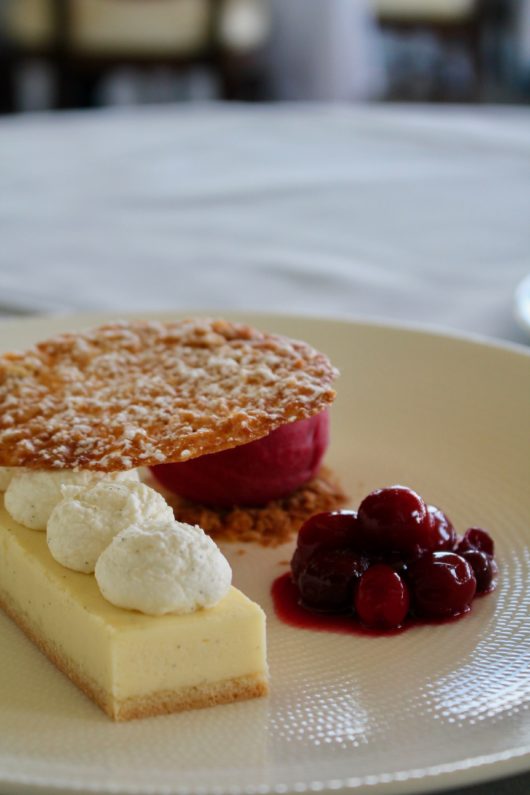 Did somebody say chocolate? When you order the chocolate mousse, you’re going to need to guard it. I mean, you can share if you want, but you might actually regret any missed bites! 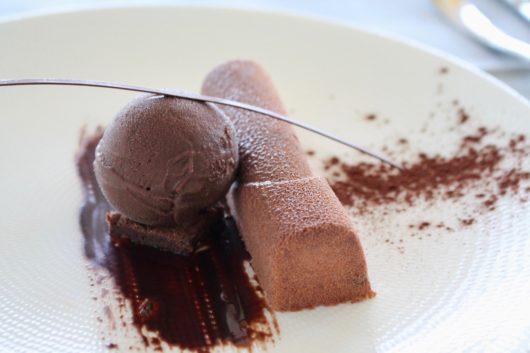 Before I left I was able to take a peek at the still-under-construction basement. Wow! Walls of actual rock from the reservation itself will soon surround diners in this private setting. The space offers a medieval ambiance that feels like quite a departure from upstairs—and outside. 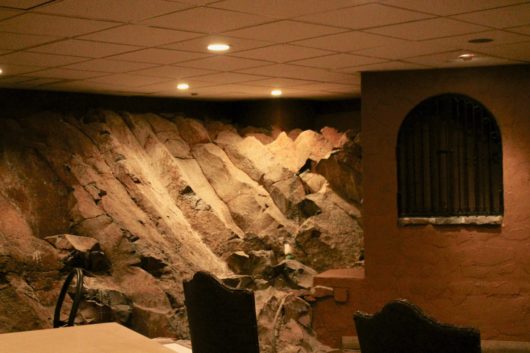 I also had quite a time checking out the bar. What looks to be an average high-top counter can, upon the push of a button, pop up into a full display case. Think proposals, from weddings to business transactions, as well as thoughtful toasts to recent retirees. The bar has that ultimate, truly memorable wow factor.

The views, the meal, and the opulent spaces will make you glad you got out the door and made the trip! The venue is currently open for dinners and soon to be announced weekend brunch. Private parties/events can be reserved upon request. 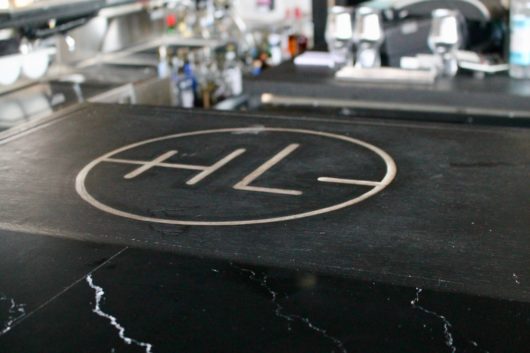