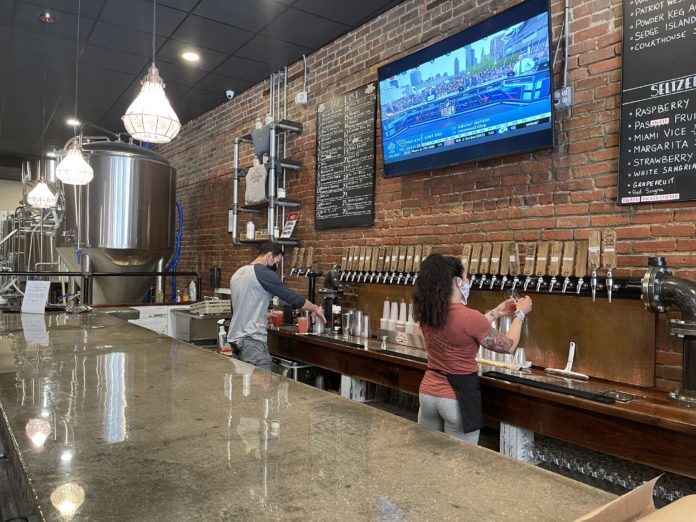 In 1782, if you were a Patriot militia soldier guarding the salt works in the small village of Toms River, you might be in desperate need of a beer. You were about to have a very bad day. A large band of Loyalist militia were plotting your demise along the banks of the tranquil Toms River and were just about to carry out their plan.

The salt works and the protective block house were burned to the ground. Captain Joshua Huddy was captured and later hung in retaliation for a murder he may or may not have committed. It caused an international incident.

Now, just a block away from the scene of the action and the park that bears Huddy’s name, is the aptly named Battle River Brewing. It’s over 230 years too late for those Patriot milita soldiers but it’s still a great addition to downtown Toms River.

This Main Street brewery retains the historic quality of the 100-year-old building it’s in. The narrow front is deceiving. It goes farther back than you’d expect and then makes a left turn to an outdoor beer garden that faces Washington Street. Picnic tables make up the outside seating, and guests will also find plenty of pub tables and bar space inside.

It was sunny and warm on the day we visited so we chose to outdoor seating. While New Jersey law doesn’t permit breweries to sell food themselves, there are a number of food options just steps away from Battle River’s downtown location. Not only do the staff of the restaurants come to the brewery to distribute menus, they’ll also deliver your order as well. It’s a handy, symbiotic relationship!

The brewery is located just a couple of blocks from a parking garage. You can also come by boat and tie up at Huddy Park.

As it happened, we were there on a Downtown Toms River night. Every Friday and Saturday night from May through October, the town comes alive with outdoor dining on Washington Street, music, and other events. Battle River sets up a bar right on the street, in front of the beer garden with a few pub tables intermingled with the restaurant dining tables. I’d definitely recommend planning your visit to take advantage of the festival-like atmosphere of a Downtown Toms River night.

Battle River boasts a surprising number of beer options, and there were over 25 beers on tap when we visited. It’s impossible to run through them all and the list changes frequently. IPA lovers, denizens of the dark, light and fruity fans, and everyone in between will find something to suit their taste. I can also report that of the three flights of beer we sampled, there were no off flavors and everything was technically proficient. Once you pick the style you want, you’ll have a good experience.

The lineup includes some quirky selections that are worth mentioning. Haka is billed as a New Zealand pilsner. I had never heard of that as a style but it is a fun little beer. Light and crisp like a pilsner, but with a distinct lemon fragrance and a lime smack—all produced by the selection of New Zealand hop varieties.

All Day Rose Wine Beer is a hybrid golden ale with Zinfandel wine grapes. I didn’t want to like it but I did! If you’re a fan of Norwegian Kveik, (and who isn’t?) then you’ll love Bluecoat Blueberry. This one is reminiscent of a saison with a dash of tart blueberry.

Hours are subject to change.