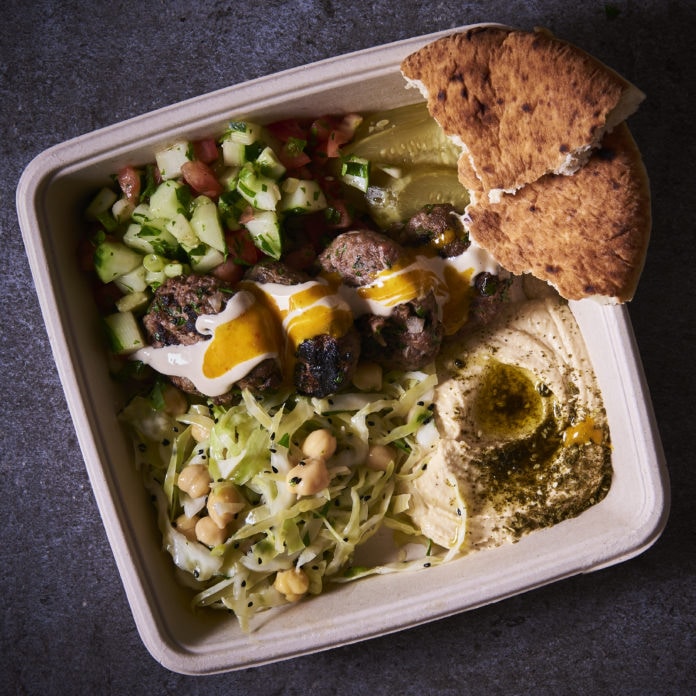 The restaurant’s specialized menu features many Middle Eastern favorite “sandvicheem,” such as falafel, kufta and schnitzel. It also spotlights modern takes on Middle Eastern flavors with a shawarma spiced cauliflower, varying “Salatim,” mezze, and more. Chutzpah Kitchen will have offerings for vegans, vegetarians, and carnivores.

The concept was conceived by Sagi Ohayon, who was born and raised in Israel and has spent most of his life in the restaurant world. He has owned and operated NYC’s Cafe Delectica since 2008. Cafe Delectica is a vibrant cafe with a strong special event and catering division. He and his family have called Maplewood home for the past five years. During that time, Ohayon has yearned to bring “the flavors and boldness of an Israeli shuk (market) to SOMA and the surrounding areas.”

Ohayon has partnered with corporate executive turned serial entrepreneur—and South Orange resident—Tanmoy Jadhav, who is the founder and CEO of Digital Made Easy. Together they aim to bring elevated fast-casual dining with chutzpah to the area.

Options for Our Time

In response to the current climate, Ohayon designed the menu, optimized for takeout and delivery, so he focused on items that will travel well. Once some restrictions are lifted, the restaurant will feature additional options such as brunch, special events, and more.

Chutzpah is a Yiddish word that translates to audacity or boldness. As patrons bite into a one of our meals, the chutzpah of the flavors will transport patrons to the streets of Tel Aviv. This is the spirit of Chutzpah Kitchen—serving food with bold flavors and a warm smile.

Ohayon uses fresh, locally sourced ingredients, in continued support of our communities. “Aside from our culinary passion for excellence, community, hospitality, and overall guest experience is what sets us apart,” he said.