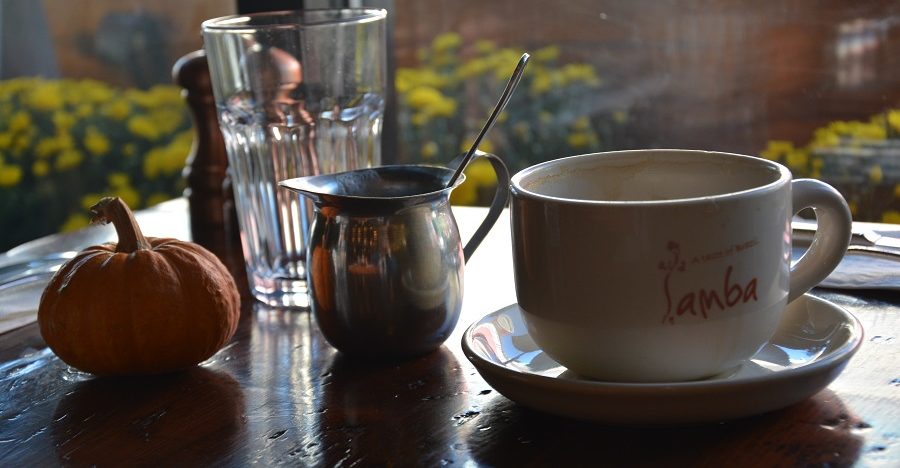 The dedication in the new book The Samba Montclair Cookbook: Authentic Home-Style Brazilian Recipes and Reminiscences reveals the starting point in the life journey of author and Brazilian-born chef Ilson Gonçalves:

Dedicated to my mother and my mirror, Nilsa. Without my mirror, I cannot have my vision.

These days, Gonçalves is living his vision as the owner of Samba Montclair, a bistro located at 7 Park Street in its namesake Essex County town. It’s a vision that involves sharing authentic Brazilian cuisine and culture with foodie fans throughout northern New Jersey and beyond.

How It All Began 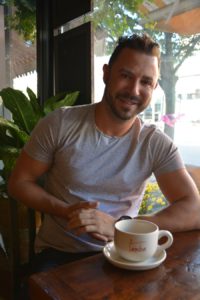 Growing up in the Brazilian southern state of Santa Catarina, Gonçalves spent time helping his mother prepare food for family and guests. His mother also owned a restaurant. At age seven he worked in his mom’s kitchen doing relatively simple tasks such as peeling potatoes, yucca roots and carrots. During this period he was developing a love for cooking and cultivating a dream of one day owning a restaurant.

“This was rustic, home-style food that my mother, grandmother and aunts would make,” the 36-year-old Gonçalves recalled during an interview at his Montclair establishment. “This isn’t the type of food that you find at big Brazilian restaurants.”

Gonçalves’ emphasis on hand-made food prepared with fresh ingredients coincides well with the farm-to-table movement that has gained traction in the United States. And his use of yucca in many dishes appeals to the gluten-free crowd.

While still living in Brazil, Gonçalves, went on to earn a computer engineering degree at the Universidade de Brasilia and began working at bank. At the age of 23, in 2004, he came to the United States on vacation. He arrived in New York City and obtained a six-month visa. It was there and then that he decided to dramatically change the direction of his life.

Still lurking inside of him was his childhood dream to open a restaurant. He “fell in love” with Montclair and began working at New Jersey restaurants; first as a bus boy, then waiting on tables and eventually obtaining management positions. All the while he retained his inner knowledge of Brazilian food traditions and continued to draw knowledge from the kitchens where he was employed.

He graduated from the Natural Gourmet Institute of New York. In December 2010 he opened Samba Montclair. Initially it was a deli featuring Brazilian specialties, but his business associates and friends persuaded him to go to the next step and turn the place into a romantic bistro. Considering the restaurant’s popularity on the Montclair dining scene, Gonçalves dream is alive and thriving.

Evidence of his success was seen during the large turnout of supporters for the October 17 unveiling of his book. (Jersey Bites first interviewed Gonçalves five years ago.) Samba Montclair enjoyed a major boost when it earned an impressive “very good” rating from a complimentary March 2013 review in The New York Times.

A blast of warmth hits you as soon as you enter Samba Montclair, a tiny Brazilian restaurant in the heart of Montclair. It’s a subtler, enveloping glow: the soothing Latin music, the weathered rustic décor, the low lighting, the young, easygoing staff. The kitchen is small and the cooking that comes out of it is guileless, in the best sense: straightforward, hearty, built for comfort.

The BYOB bistro has 15 tables and is open for lunch and supper. There are no plans to expand the cozy confines and Gonçalves confessed that this is part of his secret for success. “Keep it small,” he declared. “It’s better that way. That’s how you maintain quality. It’s like we’re cooking for family. Whatever you do, if you make it with love, you can do anything.”

As a dedicated chef, he has a respect for tradition, but also seeks out new ideas. For Gonçalves, it’s an education that takes place behind the scenes of the delicious food served at Samba Montclair. Nearly every morning he shops at the Portuguese markets in the Ironbound section of Newark. He buys choice cuts of meat and fish, favorite vegetables and fruit. He even has a preferred brand of Brazilian condensed milk.

He’s willing to go the extra mile to broaden his wisdom in the culinary arts. In fact, several years ago, Gonçalves traveled an extra 3,690 miles on a pilgrimage to Morocco to gain insights into the craft and art of spices. He said that journey has paid dividends for his work as a chef. One example is his formula for homemade “sazon,” a balanced mixture of spices that’s fundamental to South American cooking. The spices (paprika, coriander, cumin, turmeric, garlic powder, sea salt, oregano and black pepper) are blended and stored in an airtight container to meld for up to two months.

Among the selections of entrees at Samba Montclair is Gonçalves’ take on Feijoada, Brazil’s national dish, which is a stew of beef, pork and beans that’s slow cooked for 24 hours. Other choices include beef, chicken, seafood and vegetarian dishes, along with soups, salads, and a wide assortment of appetizers and decadent desserts. Yucca is featured ingredient in numerous lunch and supper offerings. Many dishes include black beans and rice.

The restaurant’s high-ceiling interior reflects Gonçalves’ sensibilities and taste. The towering walls feature warm earth tones and a collection of mirrors and drawings displayed with weathered, rough wooden frames, along with a decorative ensemble of wooden cutting boards and brass pans, molds, colanders, and ladles.

There’s one other noteworthy wall display. Photos hung in the bistro’s rest room serve as a whimsical tribute to the iconic Brazilian and Hollywood actress Carmen Miranda (1909-1954). The diminutive performer was best known for her dancing, singing and oversized, exotic headdresses. No doubt, she would have been proud to dine at Samba Montclair and meet the chef. 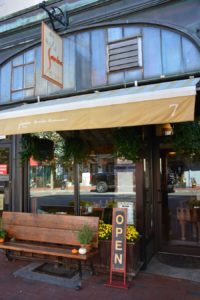