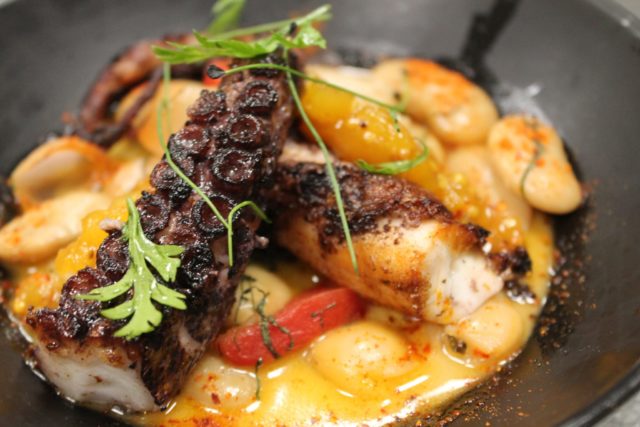 A Culinary Institute of America grad, Chef Robbie Felice worked for years in properties owned by the Mario Batali-Joe Bastianich hospitality empire, including as sous chef and head of the salumi program at B+B Ristorante in Las Vegas. He has also staged at Michelin-starred restaurants in the Netherlands and Belgium, cooked at the 2-Michelin-starred the Modern (NYC) and in NJ at Montclair’s highly regarded Fascino. Chef Felice describes his cooking as “the way food is eaten in Italy—super fresh, meant for sharing, simple and straightforward.” A Sussex native, the 26-year-old Chef Felice owns Viaggio with his father, Joe, a seasoned restaurateur.

JERSEY BITES: What is your earliest food memory?
CHEF ROBBIE FELICE: My earliest food memories would definitely have to be my family’s cooking, especially my grandmothers’. They are both amazing cooks and I was always blessed to be eating great food. On my father’s side, great Italian, and on my mother’s side, Dutch. Didn’t matter what the occasion, whether it was a holiday or just spending the weekend eating a bowl of homemade soup or a plate of pasta, it was always superb. In addition, since my dad owned restaurants, I remember being in them from basically as far back as I could remember. Always being forced to try things on the menu when really, all I wanted was my father’s homemade chicken fingers that he would bread to order just for me. In one restaurant, there was a big photo on the wall of me dressed like a chef and my baby brother in a pot munching on some dry pasta. I’ll never forget that picture, and it’s funny: my dad’s old customers come into Viaggio now and still bring it up.

When did you realize you wanted to make cooking a career? Was there an “a-ha” moment?
I was always working in restaurants, whether it was my father’s or trying out a new spot. But there came the time when I was in high school and it was [time to] decide to continue with the landscaping business I had started, or to really take this cooking thing seriously. I applied to the Culinary Institute of America and a few weeks later I was accepted. I guess you could say that was my real “a-ha” moment because from that day forward my life has been about nothing but cooking.

Any interesting stories about where and with whom you started cooking professionally?
Again, it’s pretty cool to be able to say it all started at my father’s places but I think that once I decided I wanted to work for Mario Batali, that’s when it all really started. I set a goal that I had to work for him no matter what it took. Sure enough, I did my externship at his flagship Babbo in NYC. Working alongside Chef Frank Langello was huge for me because he really knows the Batali style better than anyone. Best part about it is he still to this day tells me he only hired me on for my externship because he wanted to fire me after two weeks. Needless to say I made it past two weeks and was the first extern there to work most of the stations in the restaurant. It was a huge accomplishment for me and I owe a lot to Chef Frank and the team at Babbo for jump starting my career. I mean, I have worked for a number of awesome chefs and people who I not only look up to as chefs, but as people as well. I worked with a few chefs in Colorado who definitely left a mark on me as well as when I got back with the Batali company in Las Vegas. Vegas really became a culinary home for me—I felt like I was a big part of the team.

What is your cooking style?
I always say a chef’s cooking style is a combination of all their past experiences and the kitchens they worked in. So I would say my style is greatly influenced by Mario Batali but also has influences of other kitchens I have worked in such as the Modern and Chef Sergio Herman’s kitchens. My style is rustic with modern influences. I’m young and it definitely shows in my food.

What is the greatest opportunity that has come to you as a result of cooking?
The ability to travel the past six years while doing what I love, cooking.

What is the best advice you have to share with young folks interested in becoming chefs?
Know what you’re getting into. These days I go on the internet and read blogs and posts such as “50 Things They Didn’t Tell You About Being a Chef” or “What It’s Like to Date a Chef” and they’re all true.

If you could choose to be any food item, what would it be?
To be honest, I would be a food item that gets to travel and not be eaten fast. Something tropical, like a coconut.

What is the one food you always have at home?
Nothing—who has time to cook at home?

What is your beverage of choice?
Dom P… but these days I live off energy drinks, particularly Venom. It’s only 99 cents, and absolutely disgusting, but it keeps me going.

What is your favorite comfort food?
Any home-cooked meal. Usually Sunday’s pot of sauce with pasta.

What New Jersey restaurant do you enjoy dining at, besides your own?
I really don’t have much time to dine out, but I always enjoy going to Jockey Hollow and checking out what some of my other colleagues in the state are doing.

If you could have dinner with any three people, living, deceased or fictional, who would they be and why?
Sergio Herman, Massimo Bottura, and Marco Pierre White. They are all so different and it would be absolutely insane to have dinner with all three, literally.

Are you working on any upcoming projects our readers would be interested in learning about?
My main focus right now is to get Viaggio running as smoothly as possible and be able to do some fun dinners. I’d really like to get Ryan DePersio in to do a guest chef dinner, and to get cool product in, such as truffles, to highlight on a daily basis.