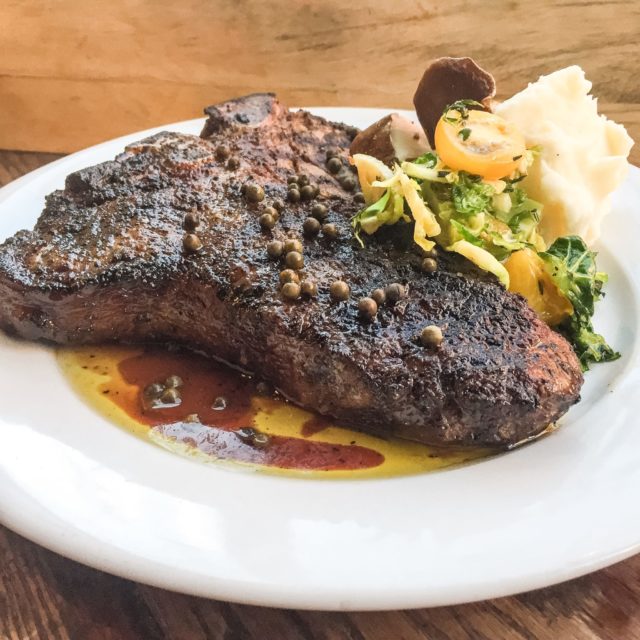 Just in time for the new year, we invite you to check out the latest edition of Jersey Bites Buzz, where Susan Bloom takes a look at some key openings around the Garden State. Have a restaurant or food outlet opening, closing, or other key development to share? Email your news to info@jerseybites.com.

Opened late last month, the newest addition to the Harvest Restaurant Group (which features 11 restaurants, including 3 West in Basking Ridge, the Huntley Taverne in Summit, Roots in Summit and Morristown, Urban Table in Morristown and Basking Ridge, and others) brings New American cuisine to the Westfield culinary scene. Decorated in mahogany and Gothic accents (a nod to Westfield native Charles Addams, famed New Yorker illustrator and creator of The Addams Family characters), Michael Ramella, manager, says, “We feature an Argentinian wood-fired grill that raises and lowers grates and cooks food over burning logs.” Diners can view the device through a glass enclosure. Signature dishes at the roughly 200-seat restaurant include wood-grilled flatbreads, including a version featuring pork belly with a poached egg on top, as well as the Addams Rib, a custom-cut long bone short rib that’s smoked and slow-cooked for 18 hours and then finished on the grill. “It’s a one-of-a-kind piece that we serve with housemade kimchi for an American twist on Korean barbecue,” said Ramella. The restaurant also features an inventive cocktail program and bars located both upstairs and downstairs. “Harvest Restaurant Group has a great reputation for quality, service, and consistency in north Jersey and we’re excited to bring that tradition to Westfield,” Ramella says. “Addams Tavern offers a great bar and dining experience for everyone to enjoy.”

Early this month, food and neighborhood-style outlet Bar Louie made its official debut in the Brunswick Square Mall in East Brunswick with a grand opening ceremony attended by East Brunswick Mayor Kevin McEvoy. The first Bar Louie location in New Jersey—and one of over 115 locations now operating in 27 states—the chain is renowned for its shareable plates, flatbreads, salads, sandwiches, and burgers. The restaurant is also known for several signature dishes including its Spiked Bulleit bourbon burger, grilled mac and cheese sandwich, and Thai chicken flatbread, and extensive selection of beers, wines, and hand-crafted cocktails, including its Pineapple Express sangria and Havana classic mojito. The new East Brunswick location will offer a variety of features it calls Weekly Rituals, including early and late-night happy hours, a $5 burger night every Tuesday, and $3 mimosas at brunch every Saturday and Sunday. “We’re excited to become a part of the East Brunswick community and hope the new location will become a place where our neighbors and employees of nearby organizations can come together to relax and connect,” shares Megan Gilmer, general manager. Gilmer added that the restaurant has brought over 75 new jobs to East Brunswick. “There’s something for everyone at Bar Louie,” she says.

Last month, Green Brook officially welcomed the opening of Duck Donuts, the third New Jersey location (following shops in Avalon and Middletown) of this 10-year-old franchise that’s grown to several dozen outlets along the east coast. The destination offers build-your-own donuts with a range of toppings and drizzles to choose from, including caramel, bacon, Oreos, sprinkles, coconut, and more. Guests can witness the making of their donuts through open glass that allows them to peer into the kitchen. “Duck Donuts are delicious, freshly made products that we truly believe in and we’re excited for people to experience our fun, family-friendly atmosphere and try all of our different flavors,” shares owner Carrie Neigel. Learn more about Duck Donuts from our article about the opening, a few weeks ago.

Following the opening of its first New Jersey-based bricks-and-mortar restaurant in East Brunswick this May, The Halal Guys introduces its second NJ location, in Newark (in the heart of the Teachers’ Village neighborhood and close to such area landmarks as the NJPAC, Prudential Center, and the Newark Museum), with an official grand opening/ribbon cutting ceremony to be held during the third week of January. Part of a 26-year-old restaurant chain that first existed as a popular food truck on the corner of 53rd Street and 6th Avenue in Manhattan, The Halal Guys is known for its Middle Eastern and Mediterranean flavors, large portions, reasonable prices, and signature chicken, beef, falafel, and hummus platters served with renowned white or red sauce and prepared to Halal standards (e.g., specially treated and slaughtered according to Islamic law). A spokesperson for The Halal Guys confirmed that the 34-seat restaurant team is excited to continue the franchise’s expansion to Newark, noting that future locations may include New Brunswick, Princeton, Montclair, Edison, and more.

Following the March 2016 opening of its third New Jersey location, on Summit Avenue in Jersey City Heights, Choc-O-Pain has announced the upcoming launch of its fourth location, this one on Palisades Avenue, also in Jersey City. The quaint shops are all known for their signature French-style pastries, which include croissants, chocolate croissants—pain au chocolat—and individualized petit kouign pastry inspired by a cake from Brittany that features caramelized layers of dough filled with raspberry, apple, or chocolate chips, as well as its artisan Mod Cup coffee. Owner Clemence Danko notes, “Due to the exciting, rapid growth we’ve experienced since opening the first Choc-O-Pain in Hoboken in 2012, we found ourselves in need of a central location where we can produce our daily, fresh-baked breads, pastries, and café items to supply our own locations as well as support the growing demand from area businesses to carry our products,” Danko is humbled by the way all of the communities within Jersey City and Hoboken have welcomed the business to town.

Set to open in uptown Hoboken in January, Porter Collins will feature “inventive American cuisine” with a raw bar, wood-burning oven, creative table-side service, and classic cocktails and is the third restaurant offered by Anthony Pino, chef/owner, and Liz Pino, proprietor, whose other restaurants include Anthony David’s and Bin 14. Signature dishes at Porter Collins will include a 30-day dry-aged Porterhouse for two, wood-charred octopus, wood-fired oyster stew with cream, bacon, potatoes, and kale, and a selection of east and west coast oysters sold by the half dozen with a choice of chorizo oil and cilantro, classic mignonette, rosé granita mignonette, or saffron tomato oil. “Porter Collins is elegant but accessible for every day,” says Pino, of the 180-seat restaurant, which is decorated in mid-century style and features a large mural of an octopus created by well-known Asbury Park-based artist Pork Chop. Porter Collins will offer service for brunch, dinner, and late night. “It will include the fun of the old-school table-side carts, and live music will be a regular component,” Pino says. “With the growth of the North end of town, Porter Collins will appeal to Pino Hospitality regulars and also to new residents in the condo/apartment buildings springing up nearby, not to mention diners from all of the surrounding areas.”