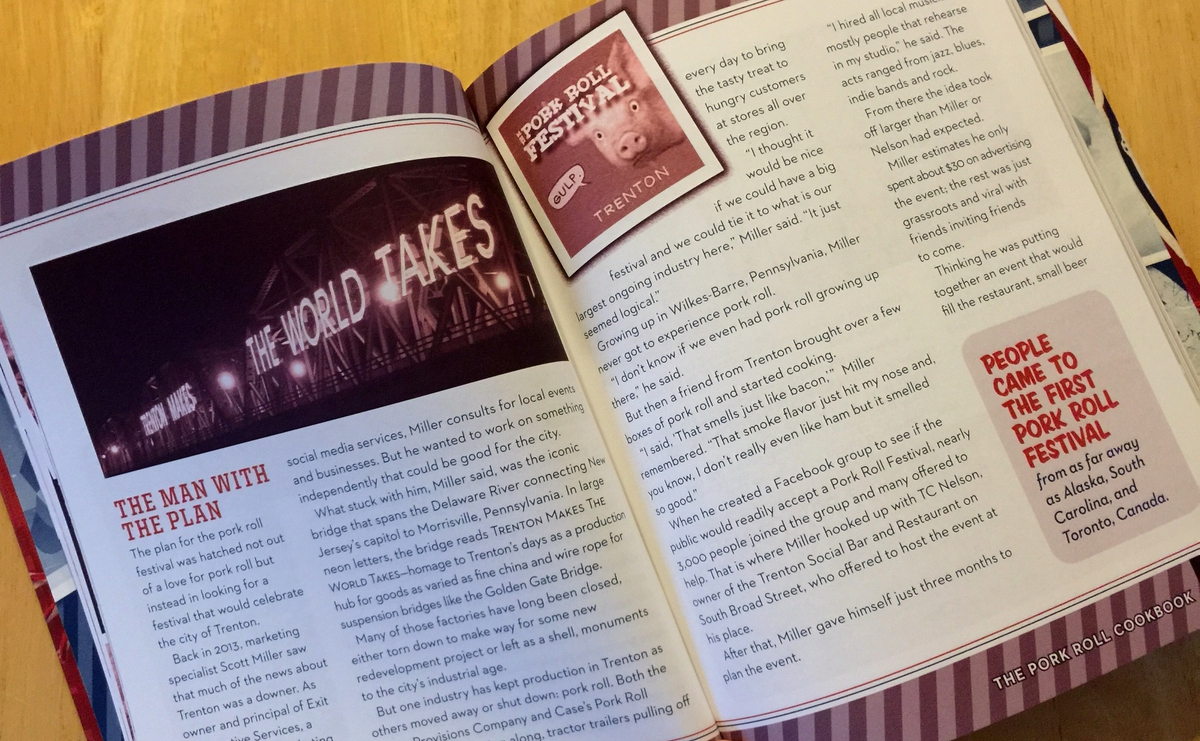 Little did The Times of Trenton journalist Jenna Pizzi know that a story about the first Trenton Pork Roll Festival would lead to her first book, a tome dedicated to the foodstuff from the capital city.

“[The publishers] came to me with an idea, ‘we are interested in writing about this niche food,'” Pizzi states. “They heard about pork roll and its draw from people who live or used to live in New Jersey and grew up on it. They saw a story I had written about the Pork Roll Festival last year. It was a preview, saying the festival was going to happen and it kind of blew up for us on NJ.com. They asked if I would be interested in writing more about pork roll—I guess they thought it made me an expert. I am now, but I wasn’t at the time. It’s not everyday someone calls you and asks you to write a cookbook.”

Pizzi is a Jersey girl, raised in Moorestown, and has been writing at the Times for more than three years.

“I didn’t eat much pork roll growing up,” she says.

The book delves into the history and culture of the unique pork product. She spent hours at the Trenton Library, in their Trentoniana collection, examining the archives learning the history of the two companies in the library’s pork roll file. (Yes, there’s a pork roll file!) “They have a file of everything Trenton has ever manufactured,” she notes. “One of the main things we wanted to do with the book is we wanted to talk to the pork roll manufacturers that still exist and they wanted nothing to it, they are very tight lipped and have a culture of silence.”

She did get to speak with the owners of a Case Pork Roll, but Taylor Pork Roll—the family that invented the original recipe for pork roll—declined to comment for her book.

So, in addition to countless hours in the library, Pizzi interviewed many of people who cook with pork roll, make their own version, and the organizers of the pork roll festival.

Pizzi was surprised to learn how creative the Taylor family was when it came to marketing their product when the company was in its infancy. “They had a stand on the boardwalk and they would have a buoy in the ocean that said pork roll,” she says. “That’s what was the most interesting to me, looking back at the history of pork because there were so many things that Trenton made and has had a hand in making and not many of them are left. It’s intriguing to me that pork roll is such a sustaining icon of New Jersey and it came from Trenton and people don’t know that. The wire rope factories and the pottery factories are gone, but Trenton still makes pork roll.” “Everybody thinks it’s New Jersey, but it’s Trenton,” she said. “It’s the only place in the world that makes pork roll.”

It took her several months to write the book in addition to all the research.

One question she couldn’t find a definitive answer to was what exactly to call the meat: pork roll or Taylor ham? “It might be quirky to people who don’t live in New Jersey, but the kind of arguments that ensue when people get into the idea of pork roll versus Taylor ham,” says Pizzi. “I kind of address that in the book. I am a believer that it’s called pork roll and not Taylor ham. So North Jersey thinks it’s called Taylor ham because that’s what they always called it, but the rest of the state—the right part of the state—calls it pork roll. It’s very heated.”

Out of the recipes in the book, she likes the pork roll pizza. “That is my favorite, I love a good pizza recipe,” she says.

Pizzi will be signing copies of her book at Trenton Social from 5 to 8 p.m. on Saturday, April 11.

May 23: Trenton will be home to three pork roll festivals, including a vegan event.