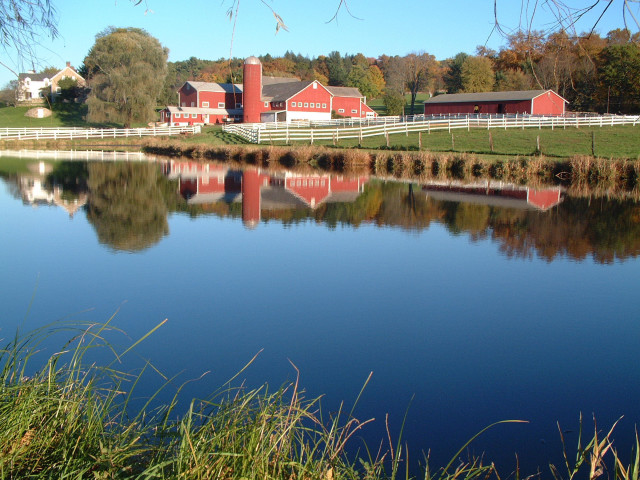 With its mountainous terrain and cold winters, the northwestern corner of the state might not be where you’d expect to find vineyards. However, I recently had the pleasure of interviewing Loren Mortimer, of Westfall Winery; Gene Ventimiglia, of Ventimiglia Vineyard; and Paul Ritter, of Brook Hollow Winery. The vineyards of the Northern Skylands are located in the steep hills and dense woods of the Kittatinny Mountains, and they generally grow grapes native to North America (e.g., Concord, Niagara), or grapes developed for cold weather (e.g., Cayuga White, Frontenac).

One thing that has always struck me is the diversity of backgrounds and life paths among winery owners. Loren Mortimer was a video producer whose father owned a horse farm in Montague. His father suggested that he and his wife Georgene plant wine grapes. For several years, the Mortimers ran an instructional winemaking school, and in 2003, they opened Westfall Winery. Two years later, the couple established a winery in Hilton Head, South Carolina where they stay during much of the winter.

Winemaking is in Gene Ventimiglia’s blood. His grandfather was a professional winemaker in Italy. After immigrating to the New Jersey, he continued to make wine for his family and friends. Ventimiglia and his wife Anne owned a farm in Wantage where they grew trees and raised livestock. The couple planted grapes in 2002, and six years later Ventimiglia Vineyard opened to the public. This is an artisanal winery – the family only produces small quantities of wine, and lets the wine develop with minimal chemical or mechanical intervention.

Paul Ritter never expected to be a professional winemaker. He worked as a biologist for the New Jersey Department of Fish and Wildlife. In 2002, he and his wife Debbie planted grapes vines in their yard. Five years later, they started Brook Hollow Winery on farmland in the town of Columbia that they leased from a friend. In 2013, they moved across town to their current location. The vineyard produces two wines for which a quarter of the sales revenue goes to benefit the nearby Lakota Wolf Preserve.

Despite the challenges of growing grapes in a cold climate, and contending with the seemingly endless paperwork connected with state and federal licensing, all three men expressed a great deal of satisfaction with creating a product that customers enjoy. Each vintner also discussed the uniqueness of their winery. Westfall allows guests to roam the 330-acre farm and picnic on site. Ventimiglia does not offer entertainment, and instead focuses exclusively on making small batches of high-quality wines. Brook Hollow emphasizes wine education, so that visitors know the production process behind the wines that they are tasting.

Of course, an article about wineries would be incomplete without some wine recommendations. At Westfall, my favorite was their Chocolate Orange Port, which is made from Petite Sirah grapes, and has the aroma of citrus and the smoothness of chocolate. At Ventimiglia, I really liked the Cabernet Franc, which is aged in French and Hungarian oak, and goes perfectly with lamb. At Brook Hollow, try Tala, a Gewürztraminer dessert wine which effervesces with sweetness, and whose proceeds are contributed to the Lakota Wolf Preserve. Charlie Toms is a lifelong New Jerseyan who loves traveling around the Garden State, and visiting places off the beaten path. He’s been enjoying New Jersey wine at least since age 21, and has visited all 48 of the state’s wineries.  Charlie grew up in Colonia, vacationed every summer in Wildwood, and now lives in Ramsey. A project manager by day, he formerly served as the New Jersey correspondent for the American Winery Guide, writing 24 feature articles on the state’s wineries. Charlie recently published Road to the Vineyard: Cruising Through New Jersey Wine Country, a 146-page winery guide based on the award-winning documentary Spain – On the Road Again, which provides detailed information on all of New Jersey’s wineries, and offers the reader eight unforgettable road trips.