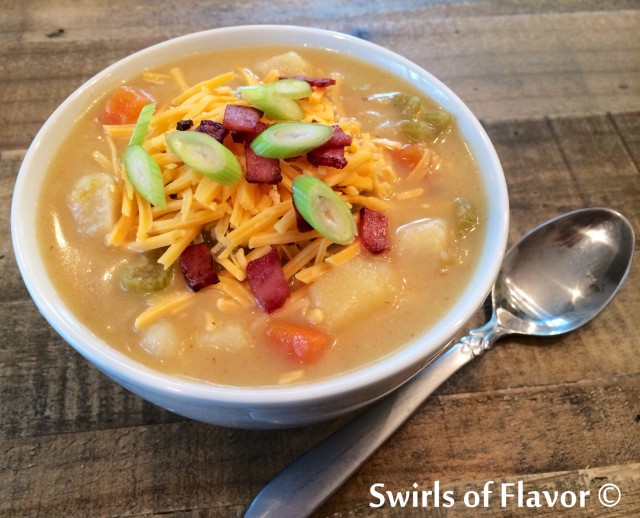 There’s nothing quite like a pot of soup simmering on the stove when there’s a chill in the air. Fall is making its appearance and Chipotle Cheddar Potato Soup is the perfect solution for a bone-chilling day! The creaminess of the soup is so comforting and the hint of spice will help to warm you up!

Recipe and photo by Gwynn Galvin, culinary consultant and creator of Swirls of Flavor.

3. Add potatoes and broth. Bring to a boil. Reduce heat to medium-low and simmer, covered, 15 minutes or until potatoes are tender and vegetables are soft.

4. Transfer 4 cups of mixture to blender; let cool for several minutes. Always be careful when processing a hot mixture in the blender! Be sure mixture has cooled a bit first! Then puree, holding hand on top cover of blender, until mixture is smooth.

Gwynn Galvin, chef and blogger, is delighted to share her original recipes on Jersey Bites. Born and raised in Jersey and a lifetime resident of Bergen County, Gwynn is Jersey through and through! Having been in the culinary field for more than 20 years, you can say that Gwynn is definitely well seasoned. With over a decade as Test Kitchen Director for a nationally published magazine as well as working for major food corporations and being partner and chef of a family-owned cupcake shop, Gwynn is also the creator of her blog, Swirls of Flavor. Her award-winning recipes have been featured in national ad campaigns, cookbooks, magazines, social media and on the internet. If you’ve ever made a recipe that was on the package of a food product or in a magazine or cookbook, chances are you’ve already made one of her fabulously delicious recipes!