When a local eatery shuts its doors for the last time and decides to close up shop, most people think nothing of it.  In fact, a fair amount of these individuals might not even notice that a restaurant has vanished from the local foodie scene.  Fortunately for all of us in the Gastronomy Guild, Mr. Joseph Sansotta, owner of several successful food establishments in Westchester, New York, is not your average passerby.  So when the Royal Cliffs Restaurant located at, 717 E. Palisade Avenue in Englewood Cliffs served its last hamburger, Mr. Sansotta seized the opportunity to open the restaurant that he had been conceptualizing for quite some time, thus Central Kitchen was born.

Those from the area who are familiar with this iconic corner in Englewood Cliffs might notice that Mr. Sansotta did not just buy the building and change the signage.  Central Kitchen was essentially redesigned from the ground up to reflect the image that was dancing in Mr. Sansotta’s head all these years.  Although this building has the very same footprint of the diner that once held this address, that is where the similarities end, and the beauty of Central Kitchen begins.  The exterior of the building looks particularly contemporary from the flat roof and brick red siding to the gray brick accents and field-stone foundation.  In addition this skillfully designed structure features not one but two large patios for alfresco dining when the persnickety New Jersey weather cooperates.

The interior adds to the modern ambiance that oozes from Central Kitchen, due to the dark wood flooring, chic color scheme, and gigantic windows that allow the sunlight to accent the design features.  Some of the key elements of the interior décor that I instantly noticed was the glass fronted open wood burning brick pizza oven, the thick granite bar top, and the large flat screen televisions that were tuned into the Yankees game when I visited.   Another fabulous addition to the interior of Central Kitchen is the large renditions of Sansotta family recipes that adorn the walls throughout the restaurant, some of which even appear on the Central Kitchen’s Menu.

Even though the grand opening event for this establishment is not scheduled until June 7, 2013, they are in, what the restaurant business calls, the soft opening phase.  (For those not in the know, a soft opening gives business owners a chance to identify and repair any glitches they might have with their general operations without having to deal with the pressure that usually accompanies a grand opening.)   I must say, I have been to quite a few restaurants that are in this purgatory like stage, somewhere between open and closed, and this past week when I visited Central Kitchen, they did not seem to have any of the issues that I have experienced before.  The fluidity of the overall experience and the knowledge of the seemingly cohesive staff lead me to believe that Central Kitchen was already an established restaurant.  I don’t know if this overtly apparent stability is due to the fact that this is not Mr. Sansotta’s first rodeo or that his General Manager, Mr. Abdou Belmaachi, has been working in the food service industry for over 20 years, but I do know that whatever their secret is, it is working, because Central Kitchen is running like a finely tuned machine.

Central Kitchen was nice enough to invite me to explore their innovative twist on American Comfort food prior to the Grand Opening event, and after conducting some high tech research, which consisted of a Google search, I found that Central Kitchen was perfect for this Blue Collar Foodie.  Central Kitchen features food that is seasonally inspired and created with many ingredients that are acquired from local purveyors.   Furthermore, it appeared that their prices seemed both fair and reasonable, as well. 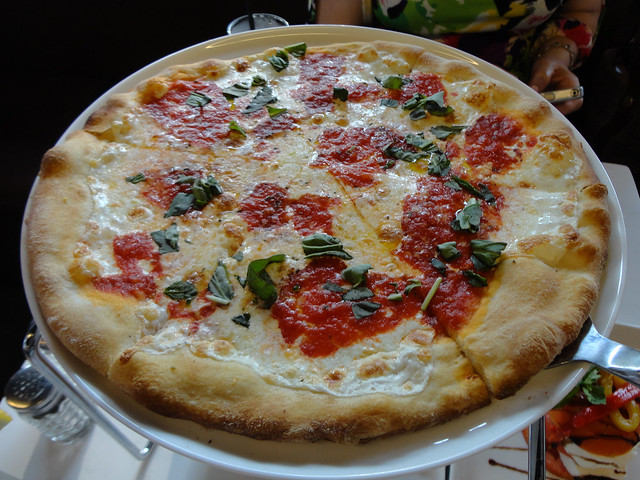 On my visit to Central Kitchen I sampled a variety of dishes that Mr. Sansotta envisioned and Executive Chef Adolfo Silverio brought to life with exquisite execution.   My first stop on this gourmand exploration of Central Kitchen’s gastronomic chops was a tag team of appetizers that would beat the silly costumes off of The Iron Sheik and Nikolai Volkoff.  First off, I could not help but dive into the Brick Oven Margarita Pizza that was delivered to our table considering I fancy myself somewhat of a Pizza connoisseur.  Most places choose to serve this style of pizza because it seems simple and easy, when in reality it is its simplicity that makes the Margarita Pizza an arduous task for the Chef that prepares it.  However, Central Kitchen nailed the philosophy behind the Margarita Pizza flawlessly, by combining fresh ingredients with crispy dough to create a light palate pleasing appetite stimulator that prepares the diner for the rest of the meal, instead of ruining his or her appetite. 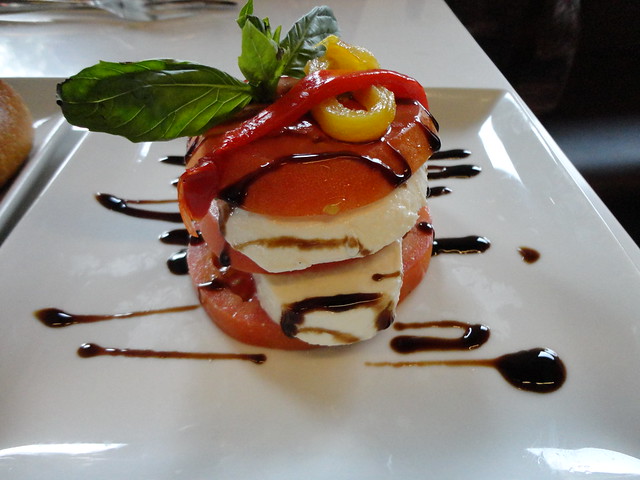 In addition to this enjoyable pie, a Tomato and Mozzarella Cheese appetizer was provided.  This beautifully presented dish was as tasty as it was vibrant and the addition of the balsamic reduction only added to its appeal.  The freshness of the tomatoes were not only obvious but extremely welcomed in this must try appetizer, that is simply perfect for any summer day while enjoying Central Kitchen’s patio. 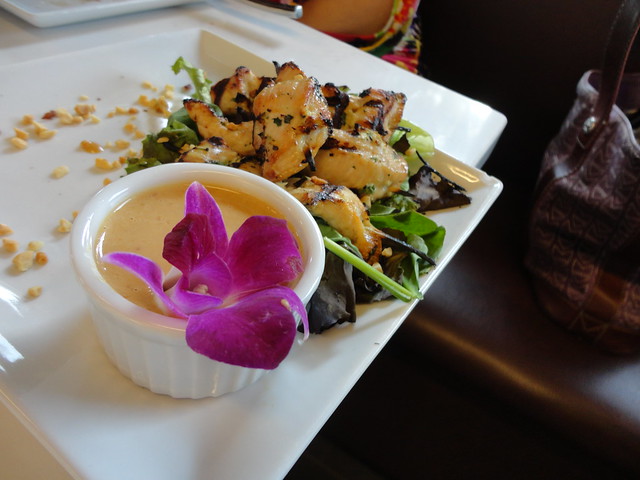 The next dish that graced our table was the Central Kitchen’s rendition of Chicken Satay.  I believe that when a Chef steps out of his comfort zone and “covers” a dish that is not technically in their culinary wheelhouse,  they should approach it as a band covering a famous song and add a little bit of themselves to the dish to make it their own.  This is exactly what Chef Silverio accomplished with this skillfully prepared starter.  The chicken was grilled to perfection leaving the outside slightly crispy with the inside moist and meaty, and the sauce was remarkable with the perfect texture and a hint of spice. 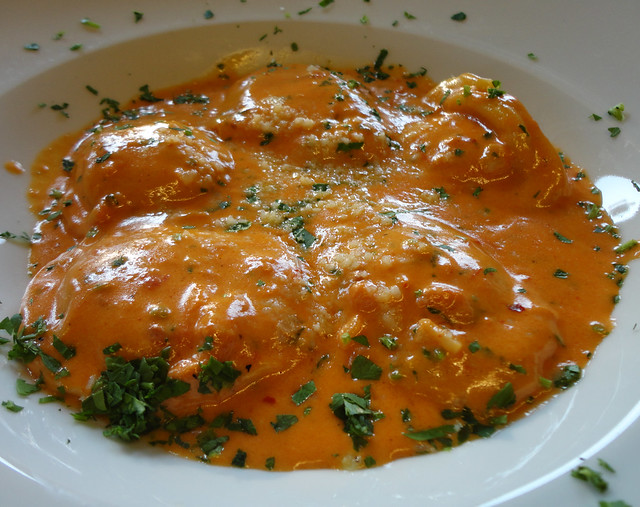 As I basked in the glory that was the dishes that I had already sampled, I was introduced to the next dish that Central Kitchen had in store for me, the Lobster Ravioli, and we became instant friends.  These large doughy delights were swimming in a fragrant vodka sauce calling me like a siren.  So much so that I almost forgot to take a picture before I dug in.  As I took my first bite of these delectable spheres, my taste buds were overjoyed by the flavor and I was elated by the amount of Lobster these ravioli had to offer.  Too often I order Lobster Ravioli that should be aptly named Lobster flavored Ravioli, this just was not the case at Central Kitchen, and my belly was happy. 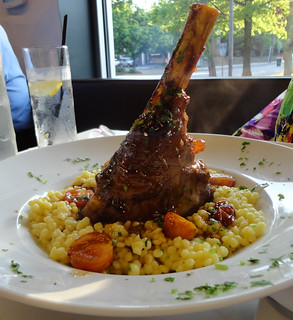 Just when I thought this eating orgy was winding down our final savory dish was delivered to the table, in the form of a stunningly presented Lamb Shank cradled by pearled cous cous, topped with a sherry wine reduction sauce.  The lamb fell off the bone with a gentle caress of my fork and when paired with the cous cous and the delicate sauce, it was absolutely divine.  The gaminess of the lamb was toned down perfectly by the Chef, leaving just enough to remind me that I was eating lamb, but not enough to overpower the dish.   To add to this entree’s charm, the portion was gigantic and paired with an appetizer could be a great meal for two. 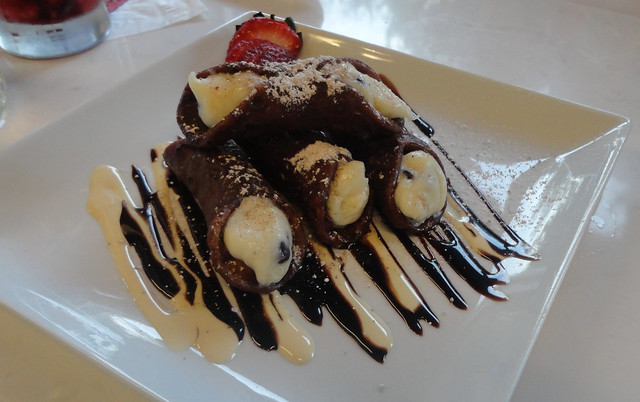 I had a fleeting thought that I could not eat another bite, but just then, dessert was brought to our table, and as soon as it arrived, I knew I could not resist.  Before us was placed Central Kitchen’s signature chocolate covered cannoli and an alluring Tiramisu severed in a glass.  Unbeknownst to the staff at Central Kitchen, one must be very careful serving me a cannoli, considering that I take the ruination of this most exalted tasty treat to be a direct insult to me and my entire house.  Lucky for everyone, Central Kitchen followed the golden rules of cannoli making, start with quality shells and filling it when I order it and not a moment sooner, to ensure the structural integrity of this yummy cream-filled vessel.  Not only were the shells crispy and the filling delicious, the combination of the two was heavenly. 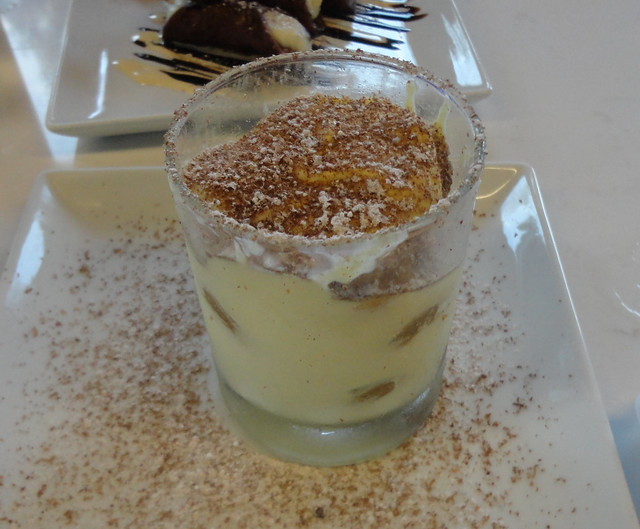 The Tiramisu was slightly different than most of the Tiramisu that I have eaten and that is why I loved it.  I find that in most Tiramisu, the creamy substance that is the basis for the dessert is usually too liquefied and therefore if not eaten immediately turns the entire dish into some form of lumpy pudding.   Central Kitchen solved this problem by using a cream with a pudding texture as the base thus creating in my opinion a revolutionary Tiramisu.

If reading this article has not made you want to check out this fantastic new foodie find, I will up the ante a bit.  Central Kitchen also has a fully stocked and quite affordable bar.  They offer a wine list that is not only impressive but reasonably priced, a seasonally rotating craft beer selection, and some very fancy specialty cocktails that are utterly perfect for a hot summer’s day on the patio.  For a limited time, Central Kitchen is also offering a Happy Hour Special 4PM until 11PM featuring some excellent prices on most of the drinks they serve.

All in all, thanks to Joe Sansotta’s imagination, Chef Adolfo Silverio’s execution, and Abdou Belmaachi’s expert guidance, Central Kitchen is on the verge of becoming a true contender in the heavily populated foodie scene of Bergen County.  The community of Englewood Cliffs should be proud to claim Central Kitchen as its own, and support this fledgling restaurant as it blossoms into the culinary powerhouse that it has the potential to become.

Mike Arp a/k/a The Blue Collar Foodie was born and raised in Northern New Jersey and has spent most of his adult life on a relentless quest to uncover eateries that deliver white collar fare at blue collar prices.  This never ending journey, combined with his passion for writing gave birth to his current food blog, The Blue Collar Foodie, which is published on both WordPress.com and The Fair Lawn Patch. This blog chronicles him and his wife Zoe’s excursions to eccentric, unconventional, and of course affordable restaurants throughout the great state of New Jersey and beyond.  If you are the type of person that would rather rock a Nirvana T-shirt and jeans while eating your filet mignon then you most likely will enjoy what The Blue Collar Foodie has to say.  Follow him on Twitter @Fairlawnfoodie or Like him on Facebook to keep up to date with his current gastronomic gallivanting.