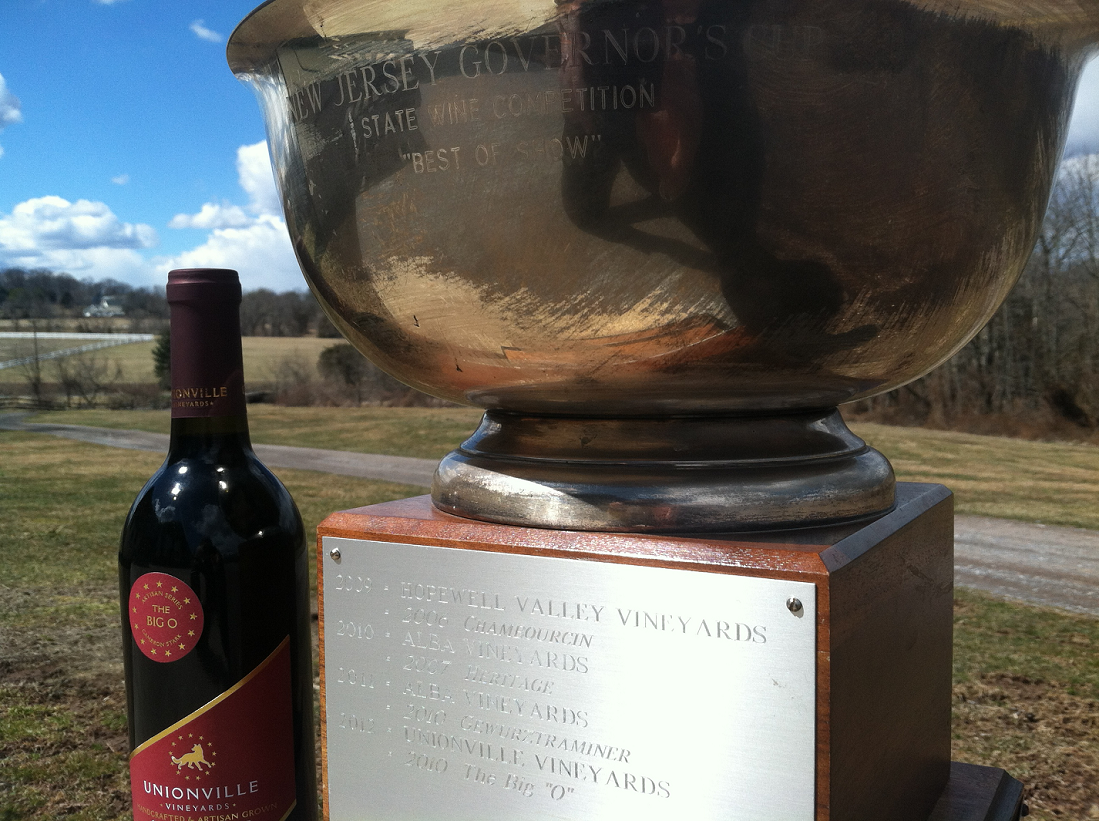 Winning a trophy at the judging, which is announced annually at a festival that draws thousands to Somerset County’s Natirar Park, has become increasingly impressive since the competition began 27 years ago. In that time, the number of participants in New Jersey’s burgeoning wine industry has swelled from 13 to 62, making the Cups all the more coveted. Judges this year included NJ wine store owners, restaurateurs & sommeliers, wine writers, and certified judges from the American Wine Society. Out of over 50 submissions in the dessert wine category, they collectively nodded to Vat 18.

“It is made from 100% Chambourcin, a French-American hybrid that grows successfully in cooler climates like New Jersey, Nantes, and the Loire Valley,” offered Cameron Stark, Unionville’s winemaker of nine years. “It’s versatile. You can use it to make a rose, a dry red, or blend with it. But we think it shines best as a dessert wine.” The judges this year agreed. The ruby style Port (yes, they can call it “Port”, as they were grandfathered in having made Port for almost 20 years at Unionville) is blended from 10 different vintages of Chambourcin, as old as 2001 and as young as 2012. “The result is this deliciously complex, layered wine that has so many unique flavors, like almond, berry, dried fruits, and even orange liqueur. It’s a special wine,” says Stark.

For Unionville, it’s the latest stamp of approval in a long history of recognition, cementing their status as one of the premier wineries of not just New Jersey, but the East Coast. Besides the success at the state competition, Unionville has had remarkable results when toe to toe with wines from across the country and around the world. Director of Operations John Cifelli rattled off a string of awards, but a couple stood out. “Last year’s Judgment of Princeton was a watershed moment for us, with one of our single vineyard Chardonnays coming in 2nd in a blind taste test between New Jersey and high-end wines of Bordeaux and Burgundy. Two years prior, a different vintage of that Pheasant Hill Chardonnay was the only double gold medal winner at the International Wine & Spirits Competition on London. When you are in the same league as names like Grgich, Mondavi, and Drouhin, you’re doing alright for yourself. To be doing that in New Jersey is special, and we are all really proud of that.”

Tucked away on 90 acres of preserved farmland in bucolic western New Jersey, Unionville is open to visitors seven days a week from 12-5pm. In addition to Vat 18, last year’s champion, “The Big O,” is still on the menu, so for the time being, guests of the winery can sample not one but two state champions, and there is more to come. “The 2012 Pinot Noirs and Chardonnays that are currently in barrel are some of, if not the very best wines of my life,” says Stark. “When we release them later this summer, we expect them to redefine how people look at wines grown in New Jersey.” Strong words, from one of New Jersey’s strongest. Visit the website at www.unionvillewinery.com to plan your visit for tastings or a special event.