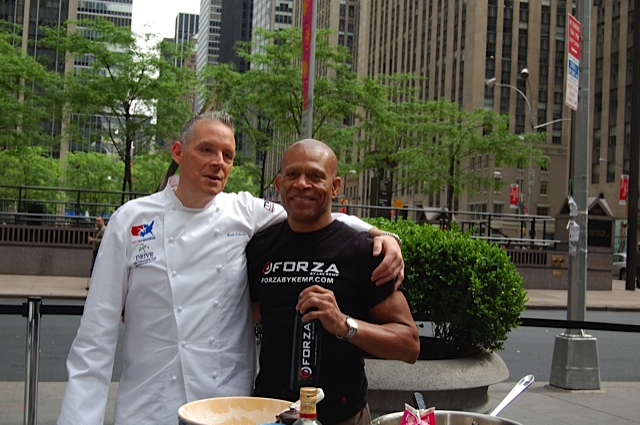 After serving as an International Olympic Committee fine dining consultant at the past five Olympic Games, Bernardsville’s Chef Scott Cutaneo (above, left) has been named the official chef for USA Wrestling and he’s already well on his way to helping the team prepare for success at the 2012 Olympic Games.

Before heading off to London, USA Wrestling will hold the NJ Drive of Champions, a golf outing to benefit the organization. The event, which will feature members of the 2012 U.S. Olympic Wrestling Team, will be held on Monday, June 4, at the Trump National Golf Club in Bedminster. Cutaneo will be in attendance, along with Honorary Chairman Randy Couture and Honorary Co-Chairmen James Ravannack, Doug Kimmelman, and James Downs. Cutaneo explained the importance of this event. “USA Wrestling is totally reliant on the fans,” he said. “Fundraising covers training, warm-up suits, even the nutritionist.”

Cutaneo works closely with the team’s nutritionist, Lee Kemp (above, right), who is a U.S. wrestling legend in his own right, including three World Championship titles, to ensure that the athletes receive a proper balance of nutrients without sacrificing the opportunity to experience delicious meals. He said, “We try to create a menu where the athlete is not focused on trying to consume something that he’s not enjoying.”

A classically trained French chef, Cutaneo has made a name for himself in New Jersey and around the world. He regularly appears on Fox and Friends and twice received a four-star rating for Le Petit Chateau, which he ran for well over a decade. Recognizing that performance and confidence can be hugely affected by personal experience, Cutaneo wants the team to look forward to meals rather than saying, “Oh, I’ve got to eat this, but it doesn’t taste good.”

The nutritional requirements of what the athletes consume vary greatly for pre-workout, during-workout, and post-workout meals. An example of a post-workout meal (that could easily be mistaken for an entrée at a high-end restaurant) is roasted salmon on quinoa grain, with roasted almonds, golden raisins, and a little cilantro. Cutaneo said, “Then I would add a little fat on that plate—shredded Gruyère—but a very small amount that is so minute that it doesn’t affect the absorption of protein.”

He consults with Kemp every step of the way, pointing out that while they work from a comprehensive list of different foods, the two often discuss alternate suggestions based on athletes’ preferences and nutritional needs. Cutaneo’s ultimate goal for USA Wrestling is simple: “[I want] each athlete to know that everything he needs is in this dish and be happy that it tastes great.” Now where do we get some of that roasted salmon?