The American Vegan Society hosted a VEGAN “HOLIDAY DINNER” and TOUR at Atlantic Cape Community College’s Careme’s Restaurant. We were taken on a behind the scenes kitchen and greenhouse tour rarely seen by restaurant goers. The greenhouse is the source of organically grown herbs, fruit and produce used in many of the dishes created at the restaurant by the students. On this night, adjunct Chef Instructor Steven Cozzi of Fuze Restaurant in Avalon was on hand as back of the house chef along with the student chefs, to prepare the evenings vegan dinner specialties. Doc Lou provided the musical interludes in the dining room. My husband came along reluctantly on this night, as my girlfriends couldn’t make this trip. My husband is a real “meat and potatoes ” kind of guy, so the idea of vegetables being the main course and all of the other courses as well was not his idea of “real food.” His words! I however LOVE my veggies, the more the merrier. I tend to think of meat as the side, so a vegan dinner is right up my alley.

After the tour the diners were all seated communal style, something I enjoy doing, it makes for interesting company as well as delicious food. Not that my husband’s company is anything but stimulating. (He may read this!) We were seated with two fun and interesting sisters Donna and Paula, one vegan and one not quite vegan. They had traveled from Monmouth County and Cape May County respectively.

The dinner was a delightful mix of RAW and COOKED vegetable courses. Warm Grilled Pita Bread with three dips were brought to the table by our student server Adam. The dips of Sundried Tomato Chickpea Hummus, Pureed Edamame and Roasted Garlic in Olive Oil were quickly devoured. Adam was so personable and informative and explained what was in store for our gastronomical pleasure. We were treated to a Raw Celery Root Ravioli with wild mushroom filling, finished with a beet and red wine reduction. It looked like a traditional ravioli but it tasted like a light fresh bite of heaven. The Butternut Squash Soup was served in a perfectly cooked little acorn squash with cinnamon oil and toasted squash seeds. Everyone at the table wanted the recipe, including my husband. He said if I cooked vegetables like this he might consider converting! (What did he mean by that?) Next, was an impressive Tri-colored Carrot and Mushroom Terrine. (pictured above) I know gelatin is an animal by-product, but this terrine was made with Agar Agar an ingredient I have been recently seeing used on the Food Network. Sometimes it does pay to watch reality television.

Vegetable “Lasagne” followed. The vegetables were cut on a mandoline and layered with a tomato au jus and baked just long enough to preserve the vegetables’ natural taste without being too soft. 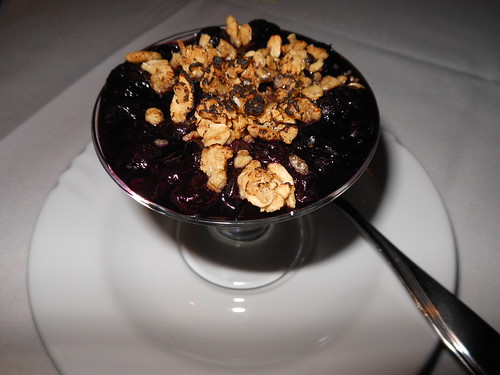 Dessert was an Almond Panna Cotta with berry compote. Almond milk takes the place of dairy, and only added to the creamy almond goodness. My husband announced he was actually full, no mean feat I might add! The new food pyramid shaped like a dish divided into a pie design has placed much more emphasis on fruits, vegetables, whole grains, nuts, seeds and legumes. This Vegan “Holiday” Dinner demonstrated how simple fresh ingredients can be all that is required to create a delicious wholesome meal that can satisfy even some of the most hard core carnivores of the world. I should know, I house four of them! The American Vegan Society has been established since 1960 and was founded by H. Jay Dinshah. It is a non-profit, non-political, non-sectarian, educational membership organization teaching a compassionate way of living by AHIMSA and Reverence for Life. AHIMSA is a Sanskrit word meaning non-killing, non-injuring and non-harming. You can contact them and watch for their upcoming events at

Salt and pepper to taste

Peel squash and cut into medium size. Make sure the squash is in uniform size pieces so they cook evenly. In a large saucepan, sweat onion, spices, and squash in oil for 3 to 5 minutes until onion turns clear. Add the stock and cook until squash is tender over a low to medium heat., 10 minutes or so. Puree in blender; add almond milk to desired consistency, and season.

If you would like to serve the soup in a squash “bowl”, pre-heat your oven to 375 degrees. Use Acorn Squash and cut in half on the horizontal and clean well. (Save the seeds for toasting). Lay squash in baking pan and roast for 20 to 30 minutes until fork tender but not mushy. Boil the seeds in 2 cups of salted water for 10 minutes then remove and add salt, pepper, cinnamon and olive oil and toast for 10 to 20 minutes until golden. They can be added to soup or eaten as a snack!