While on an adventure to pillage the treasures of William Sonoma, my mother and I found ourselves getting peckish. Perhaps it was the fact that we hadn’t eaten yet that day or perhaps it was the cruelly tantalizing aroma of the on-staff chef preparing samples, but midway through our shopping excursion we high-tailed it to the nearest and tastiest-looking restaurant we could find.

Montclair has no shortage of great places to eat and we had been to a number of fantastic spots on Bloomfield Ave, but Valley Road was new territory to us. We planned to walk up and down the street and take everything into consideration before making our final choice, but when hungry stomach meets kebab house, all bets are off.

It was a beautiful day (the first in a long while) and the Four Seasons Kebab House had thrown open their doors and windows and set up some tables under their awning. The open-air style appealed to us but we chose to sit inside, closer to the food. The wait staff was very friendly and had a good sense of humor as my mother and I debated whether to just go for broke and order everything on the menu. We decided to reign ourselves in and each get a lunch special. Ever the adventurous bunch, we ordered the same meal, albeit slightly tweaked for our unique pallets.

Nearly every lunch special came with a bowl of soup, an appetizer, main course, salad, and dessert. All for about $10. That’s pretty hard to pass up, especially when one loves Middle Eastern food. I ordered the lentil soup, babagannush, lamb gyro, and seasonal salad. My mother opted to skip the soup (it was a warm day after all) and got the hummus as her appetizer and chicken gyro as her entrée.

The lentils in the soup were pureed, something I was not expecting, but the flavor was perfection. There were hints of citrus and a kick of spice that lingered on the pallet and went wonderfully with the warm Barbari bread that decorated the table. The texture grew on me as it gave the soup a creaminess it would not otherwise have had.

The rest of the meal was served on one large plate and quite elegantly assembled for such a casual lunch. The rice was molded into a little mound and spices were used to create a delightful two-toned effect. The babagannush was outstanding; creamy and sweet eggplant perfectly spiced and seasoned with citrus and olive oil. It was the perfect excuse to ask for more bread. After all, vegetables cancel out carbs, right? …right?

The salad was comprised of fresh greens and I believe I tasted some chicory which was a very pleasant surprise. All the vegetables used were at the very peak of freshness and it truly made all the difference. The dressing was a very simple lemon vinaigrette that complemented the sweetness of the red onions and ripe tomatoes perfectly. I won’t lie, I swirled most of my food in that dressing, even the rice. The lamb was a little bit tough but it was deliciously seasoned and the portions were generous. The chicken was tender and juicy (yes, I stole some of my mother’s food, for shame). We were served house-brewed iced tea with our meal, an excellent companion on a warm day.

The dessert was a type of Turkish flan. I must say, I don’t really like flan, or anything overtly gelatinous. But in spite of my squeamishness over the texture, the flavor was spot on. No trace of vanilla extract here, you could tell they used actual beans. I had a hard time distinguishing the other flavors but, if you like flan, you’ll love this.

The lunch menu is very reasonably priced and as far as I could tell from glancing at the full menu, I think it’s a regular feature. We will definitely be going back again. 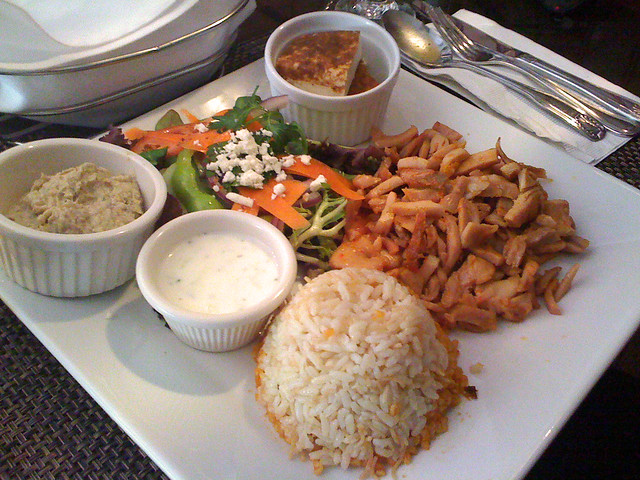 Candida Sadigh, Assistant Editor. Born in Montreal, Canada to an Italian mother and a Persian father, Candida comes from an obscenely large family. Needless to say she grew up surrounded by lots of great food. While she has always been passionate about trying new foods and enjoying favorites, she only began to try her hand at cooking a few short years ago. Her adventures in the culinary arts have drastically enhanced her appreciation for a good meal and, especially, for a creative menu.