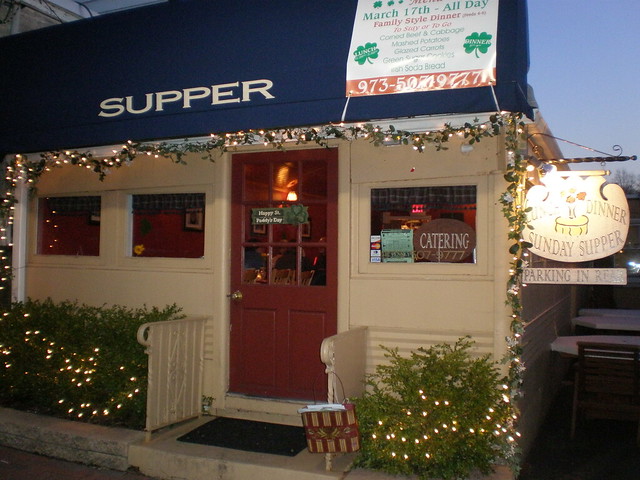 Well, not literally. We actually listened to singing after supper at one of the Sanctuary concerts at the Presbyterian church in Chatham, New Jersey, a nice venue for acoustic tunes: http://www.sanctuaryconcerts.org/. Before heading out to see Aztec Two-Step, we dined at a cute little casual place in downtown Chatham called Supper with our friends Roy and Marilyn and Jeff and Karen.

The verdict on Supper? It was a tasty meal indeed. Supper is a small, homey dining venue that is located in a converted diner. Owner Karen Hayes bakes many of the desserts herself and takes the time to come out and greet each guest, which is a gracious touch. The menu is sizeable for such a small place and combines down home American favorites and Italian specialties. We opted for the American side of the menu and were not disappointed.

I ordered the braised short ribs, which were slow cooked for more than 4 hours in a Chianti-based red sauce. They were fork tender and rich with flavor-I guess all of that simmering in the wine paid off. John tried the lamb chops, which were encrusted in herbed bread crumbs and fresh mint. These were not the usual mint jelly glazed lamb bits that you got at Grandma’s as a child. The lamb chops were perfectly seasoned and moist, and the addition of fresh mint provided a delicious twist for a traditional dish. Our friends indulged in short ribs, several pork dishes which were cooked with fruit, and a meat pie which was topped with a flaky crust. Everyone thoroughly enjoyed their dinner choices.

While the main dish portions were ample enough to sate us on their own, we all concluded that there was a little room left for us to sample dessert. We tried the apple crisp, chocolate pudding pie, and chocolate lava cake. All of our selections were enjoyable, although John (being the apple crisp purist and baker that he is) thought that there could have been a bit more of the apple crisp topping added to his dessert.