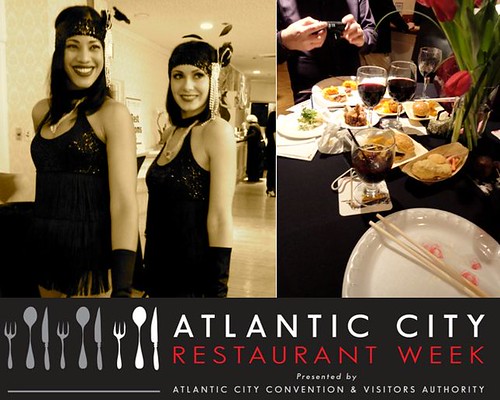 Highlights included Il Mulino New York’s flavorful ricotta meatballs and the club’s own restaurant’s pork buns with Sriracha hoisin sauce, but hands down the most satisfying and deserving of a second helping –third, if you were counting my trips to the table – would be the pan-seared lamb shanks from Sofia of Margate. I already planned to visit the restaurant as part of my restaurant week tour, but so garlicky and tender, the flavorful meat pops almost had me reaching for my OpenTable mobile app to book my dinner reservation straightaway!

The night’s dark horse proved to be Showboat Casino’s dessert display. Assembled as mini fast-food items, the burgers and fries, chicken and biscuits, and tiny tacos were sweetly disguised cakes, fruit, and other confections. Chef Deborah Pellegrino’s small touches from the sweet, tart candied orange peel and salted, honey brushed buns to the fragrant, curry-dusted pound cake “fries” were unexpected highlights in what is often thrown together as an obligatory course by participants of restaurant weeks.

It was an enjoyable night that, according to organizers, couldn’t have taken place in Atlantic City up to a few years ago but has blossomed as area residents look to the city for a tasty night out and visitors as far as Texas come to take a chance on good food and good fun. Toward the end of the evning as more of the public filtered in, a woman and her friend approached the table I was lucky enough to share with fellow food lovers Lisa and John Howard of EatingInSouthJersey.com and Holly Burtchaell of randomcravingsblog.com. Glancing around the pile of plates we had dutifully pillaged, she asked if we were food bloggers. As we introduced ourselves she laughed and offered my favorite mouthful of the night, “With all those plates I knew there was something not quite right over here. A toast to New Jersey food bloggers!”