With the first Friday the 13th of the year already behind us, and a nine-month wait until the next one, here’s the story of one writer’s recent adventure. 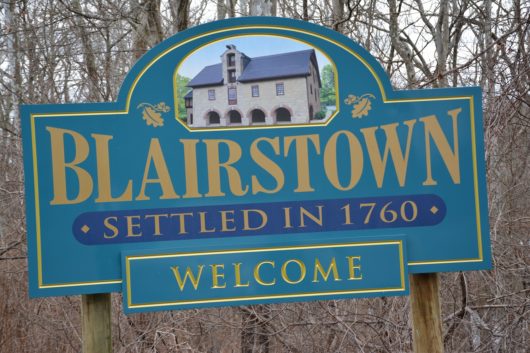 It was a mild, cloudy Friday. I motored through the hinterlands of western New Jersey on Route 94. It was a good time to stop for lunch at a diner. All of the familiar, reassuring sights, sounds and aromas were on display: Stainless steel, neon lights, eggs sizzling on the grill, coffee being served, friendly waitress chit chat, a hulking lunatic wearing a hockey mask and holding a bloody axe, customers conversing and munching on French fries, and…

Hey, wait a minute: a hulking lunatic? What’s he doing here? What’s going on? Where am I?

Suddenly, it all became clear. It was Friday the 13th and this reporter had stumbled into the vintage Blairstown Diner. A nice chap named Brian Emenheiser, of Allentown, was the full-costumed re-enactor portraying Jason Voorhees, the murderous, gruesome fiend from the Friday the 13th movie franchise.

The first installment of the movie, released in 1980, included a spooky interlude that featured this diner as part of the scene. Devoted fans of the cult classic film regularly visit the diner whenever Friday the 13th happens during a calendar year.

Sure enough, the place was packed and people — dressed in black Friday the 13th shirts — posed for selfies with Emenheiser in his Jason gear, all in good, scary fun. Stuff like this only happens in New Jersey, the indisputable diner capital of the universe.

Gary D. Wishnia purchased the iconic eatery in 2019. On this day in 2023, he smiled from ear to ear, enjoying the buzz and convivial interaction between patrons and Jason. Wishnia has remodeled the diner’s exterior while retaining its hometown charm. 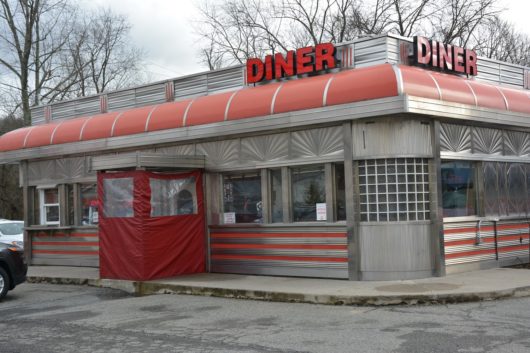 Sitting at the counter, Wishnia was a happy man and proud steward of this historic, prefabricated, modular, factory-built Jersey diner. Under his leadership, the Blairstown remains a time-honored outpost in a rustic region of Warren County.

Have You Heard About the Omelets?

Omelets were the big mover on this Friday the 13th. Yes, there were burgers, club sandwiches, and pancakes on the tables. But omelets of all shapes, sizes, colors, and ingredients were the favorite fare.

This reporter went with two eggs over easy on a roll — simple, unadorned and delicious — but splurged on dessert: chocolate pudding with a generous topping of whipped cream. The dark, smooth coffee was especially tasty as well.

The Paramount Dining Car Company of Haledon built the Blairstown Diner in 1949. An invoice, dated August 24, 1949, documents that Charles Simonson, the original owner, paid Paramount $515 for the “transport of diner number 607 to Blairstown.”

The Simonson family sold the business in 1983 and, after several changes in ownership, Panagioti (“Pete”) Apostolou, a skilled, veteran diner man, bought the eatery. Apostolou ran it for 30 years.

Apostolou died in 2018 and his son, Peter, briefly managed the business. “This diner is a living, breathing thing. People rely on this place,” Peter said during a September 2018 interview, honoring the legacy of his late father.

The diner underwent a major renovation in 2005. PMC Diners, the descendant of Paramount, upgraded the roof and completely redesigned the façade. They also created a single front vestibule entrance in the center of the structure.

Customers continued to pour through the front door and the jovial wait staff kept pace, delivering omelets from kitchen to tables. It was time to carry on and say goodbye to Jason and Wishnia. I offered good luck and happy new year, until we meet again.

The next Friday the 13th will happen in October. Mr. Emenheiser promised that he would return. Mark your calendars.

This was a mild, cloudy Friday in January. The strong current of the Paulinskill River flowed under the historic Blairstown Footbridge, located adjacent to the diner. Black bears, deer, and raccoons rambled throughout the woods that line Route 521. Trucks, vans, and cars traveled along Route 94.

Each morning, a living, breathing thing known as the Blairstown Diner awakens, just as it has for more than seven decades. Yes, people rely on this place. Breakfast is served beginning at 7 a.m. All is well in Blairstown. All is well.