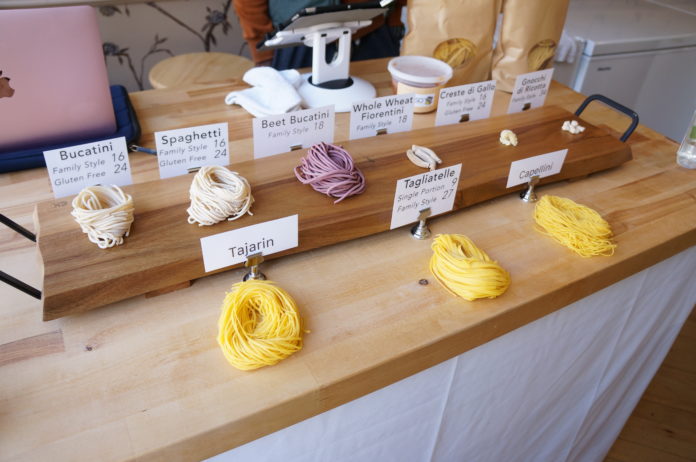 The idea of making pasta from scratch often leads to the question, “Who’s got time for that?” New Jersey chef and skateboarder, AJ Sankofa, subscribes to a different school of thought. For him, the time this process takes is a top selling point.

“It’s just time,” Sankofa said. “We spend eight hours cooking tomato sauce. Then 12 hours for our ragu, which is beef shoulder, pancetta, and different meats simmered to perfection. We do a lot of preliminary technique. [Then we] unify it all in a pot at the end to create one huge umami, basically.”

Chef Sankofa focuses on quality. He uses culinary techniques he learned from mentors who have received Michelin stars. His pasta is created from imported Italian flour to offer fine, hand-crafted food products for those who might not otherwise get them. As a result, he’s making pasta at a grassroots level in an attempt to bring handmade, gourmet Italian cuisine to New Jersey.

“Working in restaurants, a lot of people take the shortcut route,” said the 23-year-old from Hell’s Kitchen (in Manhattan). “My priority is making the food as good as possible—like I am cooking for myself. That’s important to hold on to. I want to provide people with the type of meals I ate when I spent time in Italy.”

Pasta to Write Home About

Sankofa currently lives and works in Morristown, NJ. During his career in hospitality, he has spent a collective 14 months mastering his craft and working as a chef in Northern Italy. Now he’s applying his earned cooking skills to his own business, ESO Artisanal Pasta.

“What we do is simple. Our ingredients come directly from Italy. We have the equipment and technique for real, authentic cuisine,” explained Sankofa. “I’d say 95 percent of people eat pasta. So, if you have any appreciation for fresh spaghetti and fresh tomato sauce, this is the freshest you can get. It’s a different category.”

Sankofa continued to explain that the pasta and sauce he makes is less refined and true to the roots of Italian cooking. For this reason, products from ESO Artisanal Pasta vary drastically from what most consumers will find on supermarket shelves.

“We’re happy to provide a unique, quality product that you can’t find anywhere else.”

Just seven years prior, Sankofa was part of the opening crew at Jockey Hollow Bar & Kitchen, also in Morristown. At the time, he was just a young kid who loved skateboarding and had no aspirations to make hospitality his career. Just like any other teenager with a restaurant job, he had much to learn.

“I went from busboy to food runner,” said Sankofa. “So I was seeing how the kitchen worked and the passion they put into the food, and I was drawn to the culinary side of things. I dropped out of Fairleigh Dickinson University to pursue the Italian Culinary Institute for Foreigners in Northwestern Italy.” 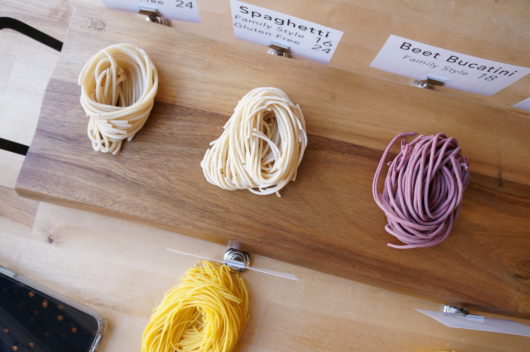 Sankofa admits to the nerves that came with this decision—not to mention how he had to explain it to his mother. Yet, just like his current cooking motto, he was committed to doing it right. Sankofa went on to receive his master’s degree from the Institute. During that time, he worked at Foradori Winery—harvesting grapes and cooking lunch for his team.

“I also worked in Ristorante Larossa, in Alba, which is the white truffle capital of the world,” he said, about a place where he’d later return to work full-time preparing meat, fish, pasta, and pastries.

From Bored to In Business

During the spring of 2020, Sankofa and Gambarian were “bored” during the first lockdown. As a result, the two hatched entrepreneurial endeavors known as Babushka’s Pies and (of course) ESO Artisanal Pasta.

“Babushka’s Pies was a cake-and-pie delivery business with my fiancé,” he said. “That business gave us the foreground to start ESO. We got experience with marketing and ordering when we started pies in April, and by July we’d fully opened ESO and put ourselves out there.”

Both businesses were based off and born during the pandemic when consumers were not getting restaurant quality food. The pair of chefs set their sights on delivering this experience to customers’ homes.

“It was really successful because you couldn’t go out and get a bowl of pasta,” remembered Sankofa. “We opened our doors to bring families closer together. There was a need for high-quality food in North Jersey, and who doesn’t like pasta?”

Sankofa opened with an online storefront, but was quickly invited to operate retail out of Andrea Lekberg’s space at the Artist Baker. The two businesses shared the location for pickup orders and now it’s jettisoned ESO into a space of its own.

“Now we’re expanding what we do. The new place will be for retail, merch, skateboards, olive oil, and rice.”

Sankofa revealed that his teenage busboy years at Jockey Hollow were also filled with hours and hours of skateboarding with good friends. While he doesn’t find as much time to skate these days, Chef AJ plans to use his new storefront to promote the awesome skateboarding community in Northern NJ.

“We’ll also be incorporating Babushka’s Pies into our regime,” Sankofa said. People have been waiting for pies since we put that on hold. We’re excited to make the storefront a place to enjoy on a nice summer say—pastries and the ability to dine here or take out. I’m excited to execute it.”