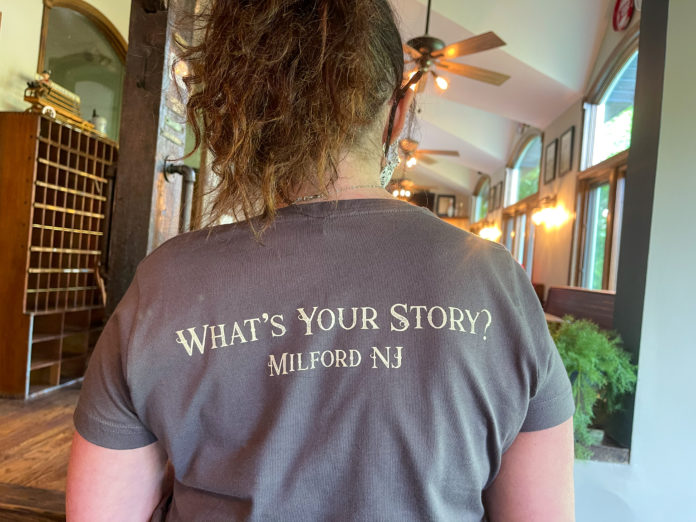 Descendants Brewing in Milford, New Jersey, located steps from the Delaware River and perched next to a picturesque millrace, is haunted. No, not in the whooo-whooo poltergeist sense, which its Victorian mansard roof might suggest. Descendants is haunted by its beloved past. That past traces back to the prideful builders who signed their names on the structure’s walls in 1879. 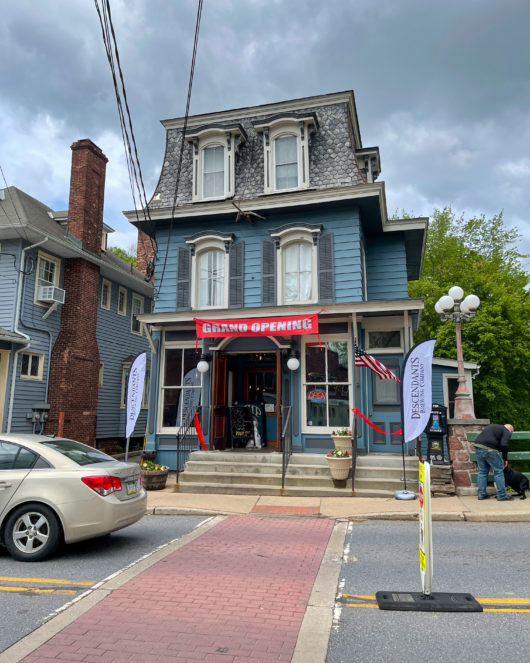 After serving many purposes over the years, the Victorian house earned its stripes as a pioneer in the fledgling craft beer movement. The Ship Inn was New Jersey’s first brewpub and became a mecca for craft beer enthusiasts. By the late 1990s and early 2000s, New Jersey was home to a handful of craft breweries in the state and a visit to one usually required a day trip. It was an event.

I made the trek to the Ship Inn, in Milford, many times even though I lived in a town that also had an early brew pub. An afternoon at the Ship, with all its Victorian rustic charm, could transport you to a different time and place. 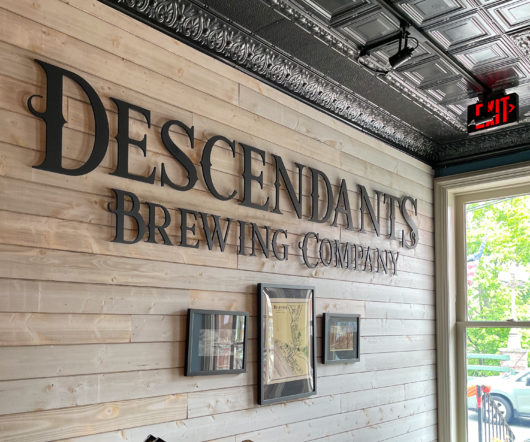 So, how do you rebrand a legend? When Joe and Ana David bought the business they ran it as the Ship Inn for three years while carefully planning a transformation. They also saved the building from becoming office space. (I can’t imagine the horror of that and neither could Joe and Ana.) They also knew that the place needed a change. For all of the challenges it presented, COVID also gave them space to pause to make the subtle and sympathetic transition to Descendants Brewing. 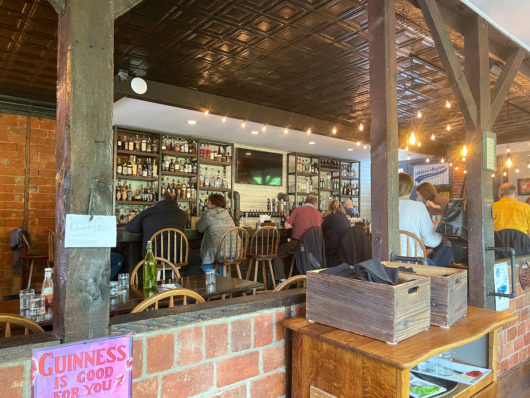 Subtle change and sympathy for the past are themes that run throughout the experience at Descendants. The bar has been redone and the crazy plaid carpet is gone, but the place somehow retains the authentic British pub aesthetic it had as the Ship Inn. 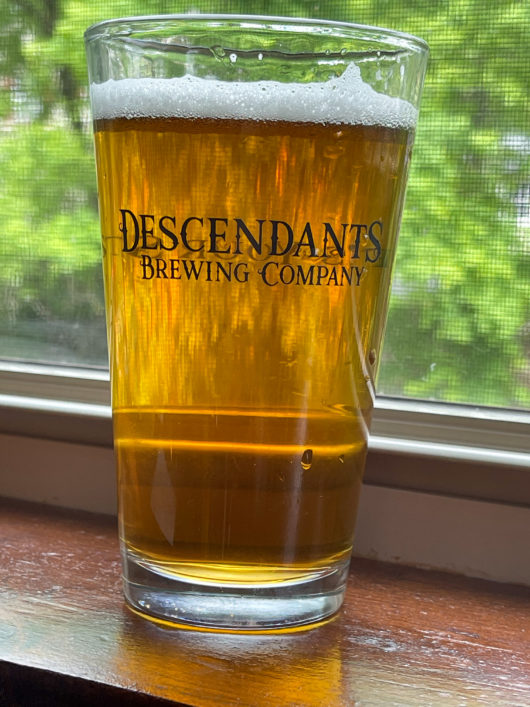 The tradition of good beer continues at Descendants. The brew house itself is a work of art. Made of gleaming copper, brick, and wood, it turns out some wonderfully authentic ales. Old Ship Inn fans will be delighted to know that the cask-conditioned Best Bitter is still on the hand pump and just as glorious as it ever was. I spent a good deal of time in the UK in the past and that beer, with its rich stone fruit character, takes me back there like no other beer can. Joe really nailed that one. “It’s fun to develop a new beer, but I was proud to execute that beer,” he told me. 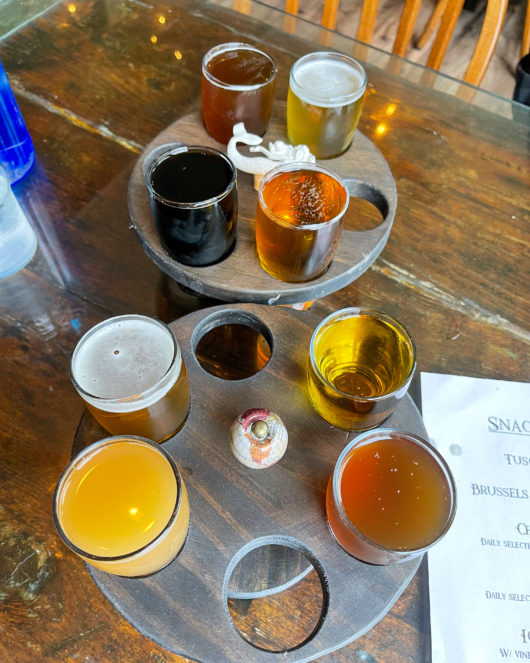 Typical British styles permeate the tap list. Alba gu Brath Wee Heavy, Eire Aontaithe Irish Oatmeal Stout are both fine examples of their style. Even their American Pale Ale, Darker Shade of Pale, has a bit of a British bent to it. It’s reminiscent of an English mild with a bigger hop kick and probably my second favorite from the tap list. If you can’t live without some haze, Fluffy Bunny checks the New England IPA box nicely.

Descendants also has an interesting guest tap list as well. Weihenstephan Weissbier, Chimay Doree Patersbier and Industrial Arts Metric Pilsner offer hints about some of the changes to the food menu. 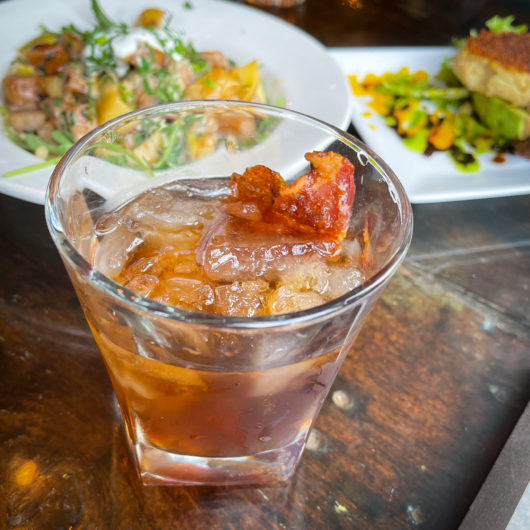 I would be remiss if I didn’t mention the whiskey (and whisky, too!) list. That could be an article in and of itself. It doesn’t matter which version of the brown liquid you like, they have it in their carefully curated menu. Flights of three, one-ounce pours are available, too. It’s a whiskey lover’s dream. 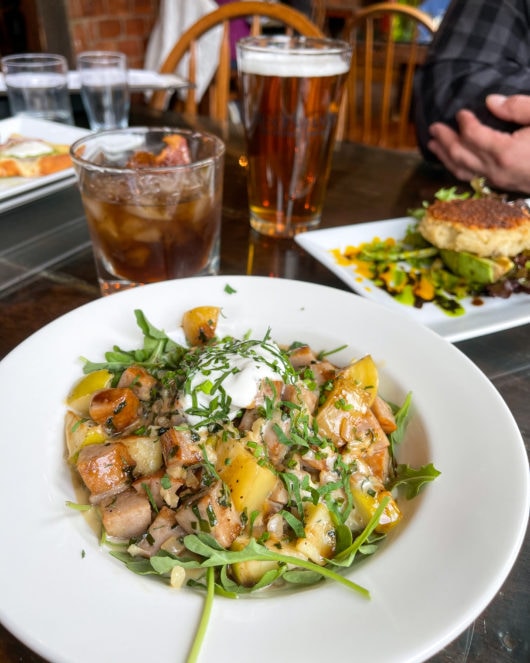 Every Meal Tells a Story

“What’s your story?” is the tagline at Descendants. Joe and Ana tell some of their story through the new menu. “We had to decide what’s sacred,” Joe told us. So you will find old favorites like the fish and chips and Scotch eggs in the “From the Ol’ Ship” section of the menu. We sampled both of these suggested dishes and were very happy we did.

The Scotch Eggs brought me right back to my many trips to England. It’s the perfect pub fare and pairs well with their Best Bitter or Wee Heavy. We were surprised and thrilled by how light and tasty the fish and chips were. One thing my many trips to England have proven is that a fish and chips meal can leave you feeling like you’ve digested a cannonball. I don’t know how they do it, but these among the best I’ve tasted—and I love that you can decide whether it comes with one or two pieces of fish.

The menu also celebrates Joe’s and Ana’s respective lineages. The “From the Fatherland” portion of the menu features Belgian- and Alsatian-inspired dishes such as Flammekueche: Alsation flatbread with Gruyère and pancetta. You may have trouble pronouncing it but you will have no trouble devouring it. This flatbread is perfect to nibble on while you are enjoying your flight of craft beer. The Belgian burger is black forest ham and smoked gouda.

For Ana’s heritage, “From the Motherland” includes selections like the Polish burger (kielbasa, sauerkraut, and cheddar), Brat Bites and Berliner Eisbein (beer-braised pork shank). The menu is as creative as it is reverent.

Love for the Garden State

At Descendants, everyone’s story is important, and they want to know yours, too. “After all, we are all descendants,” said Joe. He and Ana plan to host a contest that will reveal the best ancestral story of their patrons. The winner will design a special beer to be featured at the restaurant. In addition a video wall where guests will be able to hear other people’s stories is in the works, as sitting down with friends over a beer and telling stories has been a pastime in public houses as long as they have existed.

I can’t think of a better place to tell my tales than inside the storied walls of Descendants Brewing.