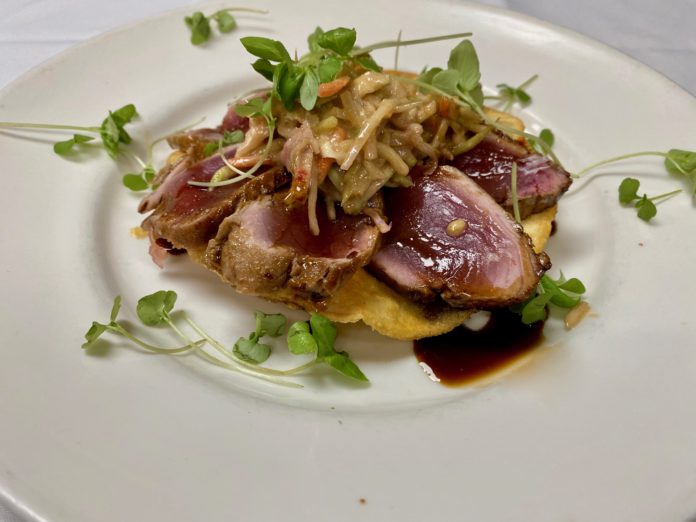 What do two bouts of cancer, a global pandemic, and a couple of stubborn canopies all have in common?
Aside from prompting most to mumble some choice words, they all have tried—and failed—to take down Greg Manning, owner and executive chef of the Serenity Cafe in Toms River, NJ.

Forty years checked into the industry, Manning has grown and evolved immensely. He started as a chef in Madison, NJ, then worked for the acclaimed Jeffrey’s of downtown Toms River, as well as the Toms River Country Club. He eventually began his own trail of restaurants and developed quite a following.

The Olde Corner Deli of Island Heights was a hole-in-the-wall spot that turned unique, memorable dishes. Downtown on Irons, his next stop, again cultivated his talent and kept him in the forefront of shore diners. And now in his 10th year with the Serenity Cafe, he has absolutely proven himself as a chef who can endure, adapt, and succeed no matter what.

So how does a restaurateur manage to stay afloat through a time like the past year? “You have to think outside of the box,” Manning explained. Or maybe more like inside the box: With the high demand for more takeout options, he developed specialty boxes for his customers. A dinner, almost 70% ready, would be boxed up and placed with a recipe card so that a family, a couple, or even a single person could cook and enjoy something of restaurant quality in the comfort (and safety) of their own home.

While his biggest challenge “before” was aligning his menu to the changing landscape of the restaurant scene, it is now becoming more inventive in working with what you have. And what does he have? He has his own top-notch culinary skills, a great team behind him, and loyal customers who want whatever his kitchen cranks out. For $17, you can choose a soup or salad, an entree, and a dessert from his seasonal and weekly changing menu.

Even though this deal is only available during the week, the options are unlike any weeknight meal you’ve had in a while. He wants people to “get a bang for their buck while having it be more than a typical takeout dish.” Think jambalaya with sautéed clams, shrimp, andouille sausage in a rich étouffée over yellow rice, or Nashville hot chicken with house-made pickles, honey drizzle, coleslaw, and mac and cheese. Has your Tuesday ever featured a Cajun-spiced blackened mahi mahi over a freshly steamed bed of rice, garnished with mango salsa and topped with a lime beurre blanc? You need some of that in your week!

If weekend dining is what you fancy, additional menu items will keep you happy and indulged. The weekend a la cart menu is offered for eat-in or takeout. Some hits include double cut, bone-in pork chops served with au gratin potatoes, corn fritters drizzled in a port cherry sauce and a seared ahi tuna, served on a crisp corn tortilla with an Asian slaw. If simplicity is more your speed, the Serenity Salad with goat cheese, toasted almonds, and cranberries in an orange vinaigrette is sure to satisfy.

Some of my personal favorites of Manning’s come from the sea. Manning’s coconut shrimp over a mango rice is exceptional and not surprising, his favorite dish to serve is “the scallops.” Sourced from Viking Village out of Barnegat Light, they are divine any way he prepares them.

Luckily Manning is happy to report a recent uptick in customer activity. When asked what he wants his customers to know, he answered with emotion. “I’m just so appreciative to the customers, whether they buy one dinner or 100, they are supporting me and my family,” he said.

The outdoor dining options have come a long way from last year, when Manning assembled and pitched an outdoor canopy twice, and twice saw it toppled by a few of good ol’ Mother Nature’s windstorms. After the second topple, he had “had it with those things.”

Fast forward to Spring 2021, the al fresco seating arrangements are coming back and are staying put as Manning eagerly anticipates a return to “normalcy.” And as someone who has had multiple family engagements and intimate dinners with friends retrieving their favored vintage of a certain wine from one of Greg’s wine lockers, I look forward to that normalcy as well.

Summer is on the horizon, and Manning is ready for it. He’s constantly working on diverse plates and innovative ideas. “Don’t give up,” is what he told himself 12 months ago. Speaking for many of us who are ready to get out, we are so thankful he hasn’t.