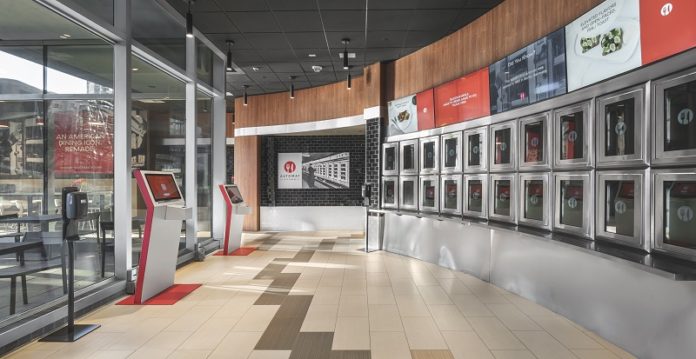 The writer was invited to visit Automat Kitchen and the meal was complimentary.

Joe Scutellaro’s inspiration for establishing a modern automat in Jersey City stems from his fond memories of going to New York City as a lad, with his grandmother, in the 1960s. He grew up in Hoboken, so the Manhattan skyline was always in view. “Those were my experiences as a child and young adult,” he recalled. “My grandmother took me to events in New York, and she always made a point of stopping at the automat.” 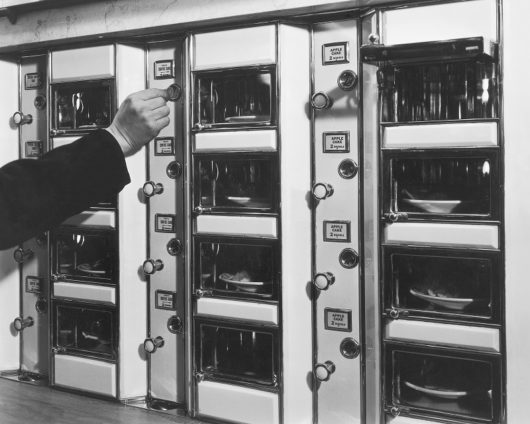 Automats are part of the Americana nostalgia craze and are glamorized in golden-age Hollywood movies. Several websites credit partners Joe Horn and Frank Hardart with opening the first United States automat in Philadelphia, on June 12, 1902. The first New York automat opened on July 12, 1912.

Urban diners would visit the novel restaurants, adorned Art Deco facades and interiors. Patrons could access food from a wall of many individual glass compartments. The self-serve process was quick and easy: drop in a coin, open the glass door, and remove the food item of choice. The last automat in New York closed in 1991.

As reported by Jersey Bites earlier this year, Scutellaro, the principal owner, and his associates unveiled the new Automat Kitchen in Jersey City on the street level of Newport Tower, with a grand opening ceremony in January 2021. Scutellaro’s eatery draws from the vintage, iconic automat concept of informal dining and updates it with digital 21st century technology.

More than a decade ago, Scutellaro, a certified public accountant, first envisioned operating a modern automat and eventually set his sights on Jersey City. While this is his first venture into the restaurant business, Scutellaro has extensive experience working as an accountant for many restaurants. Over the years he’s accrued insights into the financial elements and cost analysis of restaurant hospitality. He decided to invest that wisdom, which serves as the foundation of the Automat Kitchen enterprise.

He hired vendors to design the stylish automat window-compartment wall and develop the software to accommodate online orders. He tapped Chef Quirino Silva to create a menu that would suit the tastes of urban diners and fast-paced commuters, as well as provide contactless, on-the-go convenience. Scutellaro also enlisted his son Joe to be part of the management team, utilizing Joe’s marketing and communication skills to connect with tech-savvy Gen X and Millennial patrons.

Despite his careful planning, Scutellaro learned first-hand that the restaurant business is susceptible to unexpected developments and the vicissitudes of life. Originally, the Automat Kitchen was slated to open in the fall of 2019, but delays in technology changed the target date to February 2020. Then came the pandemic lockdown, which shuttered many businesses throughout the Garden State and the nation.

Through it all, Scutellaro and his team took each challenge in stride and the Automat Kitchen opened its doors in late January. He said the restaurant has seen steady growth during the last several months. So far, so good.

When asked whether there have been any surprises in the early going, Scutellaro said peak customer flow comes during the brunch/lunch slot (10:30 a.m. to 2:30 p.m.). “We originally thought breakfast would be our busiest time,” he said, adding that breakfast menu items are always available. Just like a diner, breakfast is a popular meal any time of the day.

During suppertime, many customers place orders online and receive deliveries from DoorDash and GrubHub. While Scutellaro is pleased with the online business, he noted, “We still want people to come to the restaurant and experience our automat system.”

A Visit to the Automat

This reporter visited the Automat Kitchen a few weeks back and enjoyed a late lunch: the waffle sandwich with egg, cheese and sausage, and the “mean green” salad. Tasty! I placed my order through the touchscreen station.