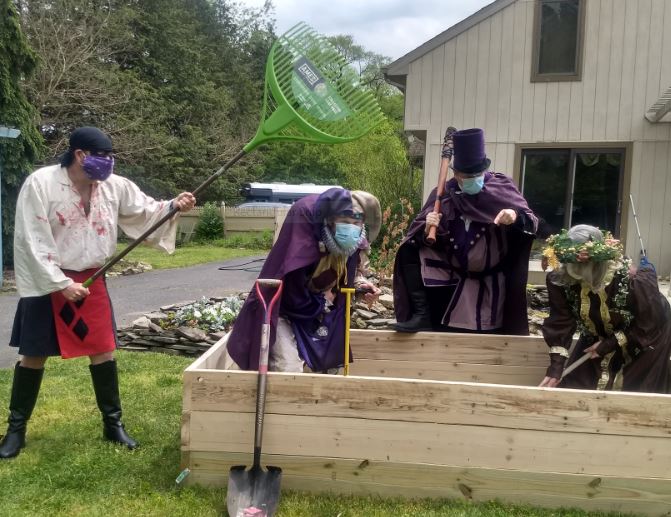 After 20 years of taking their original comedies, musicals, murder mysteries, and children’s shows on the road to perform at a wide variety of venues in NJ, PA, DE, and NY, Ryan Long, the founder/executive director of Riddlesbrood Touring Theatre Company, had to cancel their spring and summer shows. This is a first in the company’s long history. Ryan has been sheltering in place with his wife, Shannon, and two young children at his home in Laurel Springs, NJ.

Used to maintaining a rigorous schedule of designing and building sets while he was booking shows and overseeing rehearsal schedules, Ryan was feeling stir crazy as he grew increasingly concerned about his loyal troupe of actors, who suddenly found themselves out of work. Soon though, he realized he had plenty of time to devote to doing something to help them. The question was what?

As he and Shannon sat out on the deck of their house overlooking an acre of lush grass with a few trees and bushes interspersed, an idea struck Ryan.
“I told my wife I wanted to plant a garden. When she said it was a good idea, I realized that we had plenty of space,” said Ryan. “I asked her if she wanted to plant enough to feed our actors. She was all for it!”

Eager to go back to his barn and start his new project, Ryan took action. He researched how to construct a garden and couldn’t wait to get the materials and start building some raised beds. After he assessed the best place to put a garden, he measured off an area and planned where to put the beds.

Meanwhile, Shannon called their actors, told them about Ryan’s idea and asked them if they would be willing to help out.

Riddlesbrood consists of a diverse troupe of 12 multi-talented actors from NJ and PA. Many of them have been with the company for over a decade, including Dean “Woody” Duncan from Port Republic, who has been acting, singing, playing the ukulele, and stilt-walking in Riddlesbrood shows since 2001, and actor and director Armand Marino, Jr., from Toms River, who has been with the company for over 11 years. 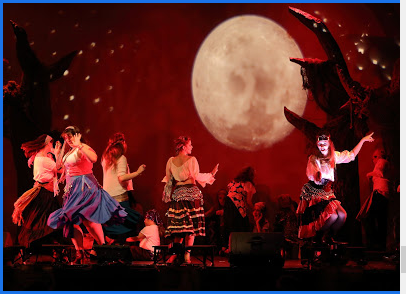 Thankful for the chance to “do something,” three crazily costumed actors from the troupe, Dave Polgar, from Jersey City, Kate Bubaker, from northeast Philadelphia, and Jeff Cleve, from Marlton, showed up at Ryan’s house the next day, dutifully wearing masks. Before long, they were happily back working together and hamming it up as they built the frames for the raised beds. They placed them and began filling them with soil.

That’s when Ryan’s creativity went into high gear. “We were already doing our Traveling Trunk Shows at fairs and festivals,” he explained. “So I asked them what they thought about the idea of creating a pop-up farm stand at our booth to sell our produce at local farmers’ markets while we entertain the people there.”
They all thought that was a great idea, especially when they heard the name Ryan came up with: Project Broodfood.

“Once we had a name, we started kicking around a bunch of ideas,” Ryan said. “We agreed we would specialize in purple vegetables and fruit to go with our purple booth and logo. We wanted to make our produce really different and sort of “magical,” in keeping with our phantasmagorical mascot, Professor Clyde P. Riddlesbrood, whose costume is always topped with his trademark purple cape.”
The three actors continued gardening and soon agreed to staffing the farm market booth when Ryan needed them. Now that he had a plan, Ryan went out to search for purple produce to plant. He bought purple tomatoes, purple majesty potatoes, and purple beans to start. The three actors came back to help with the planting.

Before they left, the actors discussed what to do with the money raised from Project Broodfood. They decided it would be put back into maintaining the garden and pop-up food stand.

“That’s really important to Shannon and me,” Ryan said. “We really don’t know what the future looks like for us to be able to perform indoor shows. It’s been a real challenge to keep our hopes up. At least we can hit the farmers’ market circuit now with our trunk show and pop-up farm stand, along with the outdoor fairs and festivals, and continue to help our actors.”

“Eventually, we’d like to reach out to help other unemployed actors in the area through our Project Broodfood Food Bank,” he continued. With main stage productions still scheduled for the fall and winter, Ryan is hoping that their busiest times of the year, Halloween—when Riddlesbrood performs their originals shows, Revenge of the Jersey Devil, Frankenmurder, and Rearview Screamer—and  Christmas, when they present their popular, original musical production of A Christmas Carol, will stay on the books.
For now, they have two interactive comedy shows for kids that have been booked for July by Secaucus Summer Camp, where the group will perform its rollicking pirate show, Shiver Me Timbers and its hilarious take off on CSI, CSI: Crime Scene Idiots.
“Who knows?” asked Ryan, smiling. “We’re starting to get more calls from kids’ summer camps. Maybe those camp shows will help us get through this drought!”

After 20 years of running his touring theater company, Ryan is willing to do whatever it takes to keep his actors working. He assured them that he’s not considering “closing” Riddlesbrood, and they enthusiastically came on board to help out with this new phase of the company.
“Project Broodfood is a reality now—an extension of Riddlesbrood,” said Ryan. “We’re going to keep performing our shows whatever way we can and now, we have another way to generate an income with a pop-up farm stand. After all this time, I never thought we’d be combining gardening with acting but this is a great way to help take care of each other. We’re in this together.”
Riddlesbrood will bring “Broodfood” to farmers markets, fairs, and festivals, starting in late August. So far, they have the Marlboro Farmers’ Market (Sunday, August 30, 9 a.m. to 2 p.m.) and the Maple Shade Sidewalk Sale Festival and Car Show (Saturday, September 12, 8 a.m. to 3 p.m.) on their schedule.
Once Ryan and members of Riddlesbrood started contacting farmers markets in NJ, they received a warm reception. The markets’ organizers were supportive of the group’s mission and engaged by the unusual produce concept.
Ryan said, “The response has been great! We’re planning on going to farmers’ markets in many NJ counties where we’ve been performing our interactive comedy shows for years. Now, we’ll be connecting with people in a different way by selling nourishing food that highlights the plight of out of work actors.”
Check back for additional farmers market locations, fairs, and festival dates, at riddlesbrood.com/broodfood or call 866-276-6399.