Timing is everything. Back in November of 2019, when friends Colin Keany and John Crepezzi dreamed up an online resource to track new brewery releases and where you can also make a purchase for pickup at the brewery, they had no idea of the trouble brewing in China. As the COVID-19 pandemic hit, on-line beer sales have become a necessity for small breweries trying to stay afloat during the crisis.

Keany and Crepezzi were having a beer at their favorite local brewery, which happens to be Source Brewing (Colts Neck) and lamenting the fact that it is almost impossible to track new beer releases. First, there are new breweries popping up all the time. Good luck just tracking that let alone individual beers! Then there are a dizzying array of social media platforms and event management applications to monitor. As much as we have our heads in our phones we are still going to miss stuff! It would be so much easier if there was just one platform.

A Plan Comes Together

Having met while working at the same tech company, Keany and Crepezzi possess the perfect combination of skills to pull this off. Keany is in product design, while Crepezzi is a software engineer. Of course, they both love beer. The fact that their local brewery is Source is another stroke of good fortune. Owner Phil Petracca has an entrepreneurial spirit that helped the pair breathe life into Beer Broadcast. “Colin and John are good customers of the Source, and also it happens they’re very talented software developers,” said Petracca. “We’ve had some detailed discussions about the difficulties we were having managing can/bottle releases, and they experienced firsthand the limitations of us utilizing Square and Eventbrite.”

First of all, it’s free for both breweries and consumers. Just head over to beerbroadcast.com, open an account, explore the member breweries, and track the ones you like. Easy. When one of those breweries releases a new beer, you’ll get notified. You’ll also have the opportunity to purchase beer on the website and before you head over to the brewery you’ll get a QR code to verify and pick up your order. If the brewery offers delivery you’ll be able to track the delivery status as well.

For breweries, getting set up is just as easy and the user interface is very intuitive. With just a few clicks you can set up all of the parameters of your beer release including start and stop dates, order limits, and inventory quantities so you don’t oversell. Delivery drivers can also use the site to track and update delivery status.

As handy as Beer Broadcast is during this time of social distancing, Keany and Crepezzi have plans to expand its capabilities. They will introduce more robust support for brewery-sponsored events, including customization, alerts, and ticket purchases. Beer menu management across multiple platforms is also on the chalk board. We’ve all had Amazon tell us that if we bought “that” we might also like “this.” Well, Beer Broadcast has similar plans. Using collected data they could suggest new beers and breweries that you might like but were not tracking.

The end goal for Beer Broadcast is to create a community of breweries and beer drinkers in a way that other beer related apps have not. Online beer sales may be one of the innovations that sticks around after this pandemic finally ebbs away. Personally, I’m getting very used to being able to pre-order from my local brewery and pick up my order when it’s ready. (It sure beats standing in line behind some guy with five growlers to fill when I just want to grab a four-pack and get home for dinner.)

Most of the breweries opening and operating in New Jersey use a tap room-centric business model and are being hit hard by this pandemic. Petracca said,”COVID-19 also brought about major changes to our business model—we had to pivot from a destination taproom focused brewery to 100% pre-packaged to go sales with the ability to provide home delivery. The Beer Broadcast guys were able to quickly add features that provided a cashless and contactless fulfillment process with the ability to also manage home delivery routing and notifications.” Beer Broadcast is a bit like a virtual tap room that enables breweries to stay in touch with their fans by selling them beer directly.

I hope more breweries sign up for Beer Broadcast because, frankly, I’m having a tough time keeping up with all the new stuff myself! 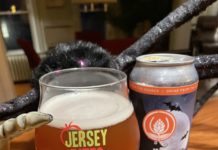 A Year of Drinking Jersey: October 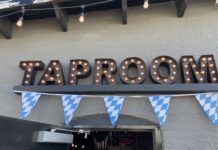 A Year of Drinking Jersey: September 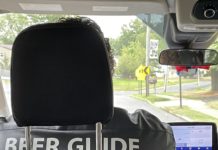