The last 24 months have been a season of renewal for the Jersey diner business. Facelifts, renovations, redesigns—call it what you will, but landmark eateries throughout the Garden State, collectively, are making significant capital investments to revamp their interiors and exteriors.

The revival is ongoing. New Jersey’s built landscape is changing as the state’s diner business continues to progress, just as it has for the last 125 years, beginning with the lunch wagon era.

As reported here, Tops Diner in East Newark—the nationally renowned, award-winning eatery—is moving forward on a major construction project that will create an entirely new diner at its current location, 500 Passaic Ave. The current Tops Diner building will be torn down. The target date to complete the work is March 2021.

Located in Southampton Township at the intersection of Routes 206 and 38 in the Pine Barrens region,the Vincentown Diner began to modernize its exterior in November 2018. Originally built by the Fodero Dining Car Company, the diner has created a boxy, geometric look, compared with its former beige and white fieldstone exterior walls and pyramid rooftop.

Traveling south from Vincentown on Route 206, where the road intersects Route 70 at a traffic circle in Southampton Township, the Red Lion Diner now displays a bolder, more dramatic, regal façade and vestibule and decorative lighting.

Two years ago Paul’s Family Diner on Route 46 in Mountain Lakes was fitted with a spectacular glass and stainless steel arched vestibule to complement its stainless steel exterior. Herb Enyart, the president of PMC Diners Inc. and the last of New Jersey’s golden-age diner builders, designed and installed the vestibule.

In Clifton, the celebrated Tick Tock, located on Allwood Road and the westbound side of Route 3, has altered its exterior with new trim, neon lights and a parapet wall along the perimeter of the roof, which adds additional sparkle as a roadside attraction. (Yes, the classic Tick Tock/Eat Heavy neon sign has been sufficiently raised, so no worries there.)

Reconstruction work began in September and the big change for the Tick Tock is the interior design and floor plan, with a vibrant color scheme, bench seating, and a shorter counter. The rose-colored terrazzo floor remains intact. The plan, tentatively, is to unveil the new Tick Tock to customers Monday, December 2.

Change is nothing new for the Tick Tock. This is another link in the chain. The current diner, built by the Kullman Dining Car Company, which opened on June 1, 1994, is the third generation of the Tick Tock—three separate diners that all occupied the same site. 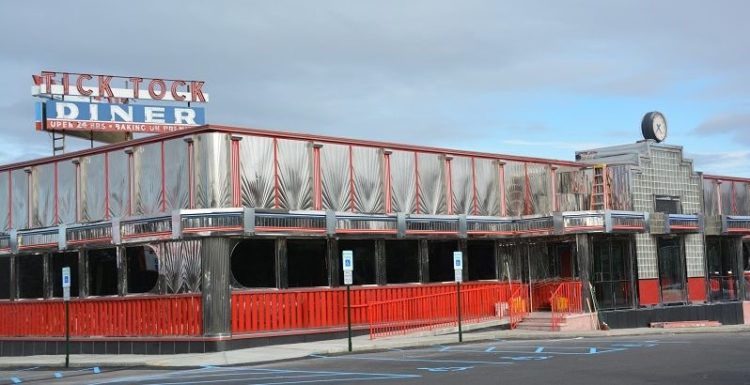 Silk City Diners installed the first Tick Tock, a stainless steel car, in 1952 and expanded it with a modular dining section in 1956. The second Tick Tock, built by Musi Dining Car Company, opened in April 1977. Seventeen years later that structure was lifted and shipped to southern New Jersey, west of Atlantic City on Route 40, where it’s been reborn as the Mays Landing Diner.

In October, the Blairstown Diner, which sits on Route 94 in its namesake town, celebrated its 70th anniversary with new ownership (Gary Wishnia) and outdoor patio seating in front of the diner. The classic eatery, built by the Paramount Dining Car Company, also sports new red DINER signs on its rooftop corner, reminiscent to how the structure looked in a misty scene staged in the 1980 cult horror movie Friday the 13th. Mr. Voorhees, no doubt, would be pleased.

As reported ihere, the Blairstown Diner’s neighbor, the Crossroads Diner—believed to be the lone diner built by the short-lived Campora Dining Car Company—was uprooted from its foundations on Oct. 3, carefully slid along steel I-beans onto a tractor-trailer, wrapped in plastic, and on Oct. 24 began the arduous journey to the hinterlands of upstate New York, in the town of Hudson. It’s slated to reopen there by the end of 2020. 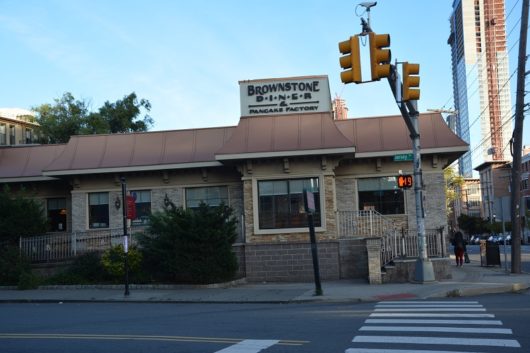 Several online news sources posted stories in early November that the popular Brownstone Diner and Pancake Factory, serving customers in Jersey City for five decades, would recast itself as the LIFE Pancake Company by the end of this year.

A new Olga’s Diner, located on Route 73 in Marlton, not far from the location of the now-gone original Olga’s Diner, opened on Nov. 14, with an array of dazzling interior and exterior design features, as seen in online photos. Work began in October 2018 on the new diner. The original Olga’s—the first iteration of which dates back to Camden in the mid-1940s—was built by Fodero and opened on the Marlton Circle (the intersection of Routes 70 and 73) in April 1960. That business closed in December 2008 and the diner was torn down during the summer of 2017. 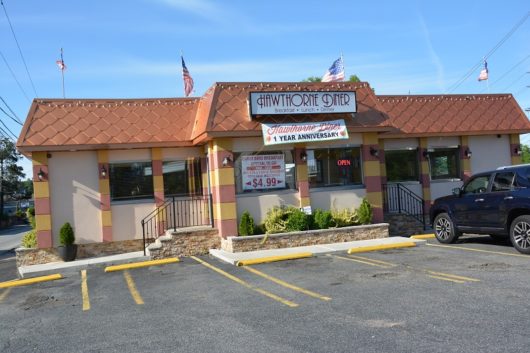 In the spring of 2017, the Triangle Diner was transformed as the Hawthorne Diner, which sits at the point of a triangle intersection of Goffle Road and Wagaraw Road in Hawthorne, not far from William Paterson University.

On the Black Horse Pike in Williamstown, Gets Diner has been reinvigorated by new ownership, and held a ribbon-cutting ceremony on March 24, 2018. Two years earlier the glistening landmark, under a previous ownership group, closed abruptly. At the time there were fears that the diner might be torn down.