It was 10:30 a.m. on a stifling Tuesday morning in mid-August, just in time for brunch. Even though I was hungry, it took several minutes before this reporter sat down in the Amwell Valley Diner, which is located on Route 31 in Ringoes, set upon the rolling hills and cornfields of Hunterdon County. 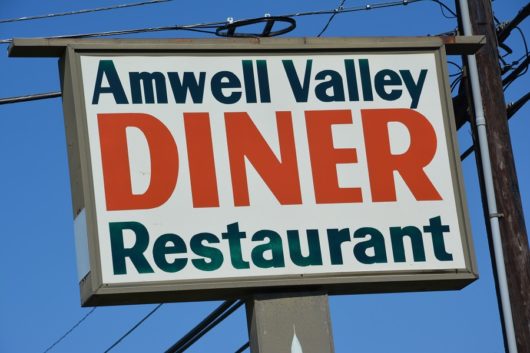 First I spent time chatting with the owners, Aglaia and Simon Siliverdis, whom I hadn’t seen in about eight years. We studied the workmanship of their eatery, built in 1959 by Joe Swingle and his manufacturing company. We admired the beautiful, vintage terrazzo floor, and smiled when we looked at black-and-white photos of the original interior design. These are kept tucked away in a drawer near the cash register.

I took my seat at the booth and asked my lovely wife if she had seen a menu. She said she didn’t need a menu. She had ordered pancakes for herself and  “already knew” what I wanted—two eggs over easy with well-done corned beef hash, home fries, wheat toast, and coffee with milk.

Before I could say the words, “Hey, how did you know what I wanted…” I stopped and smiled. Yes, I admitted it was rather predictable. This is a dish I frequently get when visiting almost any diner on almost any morning in almost any town in New Jersey (or elsewhere).

It’s always a treat: delicious and nutritious. Familiarity breeds reassuring pleasure with comfort food. Breakfast any time of the day—it’s a good thing. Many diner owners and waitresses often take pride in anticipating what their regular customers will order as soon as they see them walk through the front door.

Diner menus can be remarkably expansive, however many customers tend to stick with two or three old favorites. But specials of the day, along with featured soups and delicious fresh salads are not to be overlooked. In fact, the weekly lunch specials at the Amwell Valley Diner were colorfully spelled out on the inside window of the vestibule. Each tempting item only $9.99, including soup or salad and one side order. The list included chopped beefsteak on Monday, eggplant parmigiana on Tuesday, meatloaf on Wednesday, beef liver on Thursday, and fried or stuffed flounder on Friday.

A Look at Dessert

Sipping multiple cups of coffee, we convinced ourselves that it was too early to order dessert, but I must say the creamy smooth chocolate layer cake, adorned with chunks of chocolate, seductively sitting in the display case behind the counter, looked mighty good. I took my time as I photographed that decadent little beauty.

The Swingle Diner Manufacturing Company, located in Middlesex, which produced around 145 diners between 1957 and 1989, built the Amwell Valley Diner. Joe Swingle was New Jersey’s much-admired diner Renaissance man during the golden era of the 20th century—when diners were modular, prefabricated, engineered products built in sections inside a factory.

The honorable Mr. Swingle had expertise in all phases of the business: he was a diner sales rep, he ran his own successful Swingle’s “Air Conditioned” Diner on Route 22 in Springfield, and established the diner production company.

The Amwell Valley has a mobile history, an eatery that operated in several locations. It opened as the Tamarack Diner in 1959 on East Main Street in downtown Somerville. Several years later the structure was picked up and moved to West Main Street. It eventually closed and was put into storage.

Ironically, Aglaia worked as an art teacher in the Somerville public school system during this period and often stopped in at the Tamarack for lunch and supper. Little did she know at the time that one day she would be welcoming customers to this establishment.

The diner’s original name referred to the type of wood that was a traditional material of choice to support the hulls of 19th century whaling ships. As such, the diner had an interior that featured hanging ceiling lamps and iconic nautical-style design appointments. It pioneered the family-friendly “colonial” look for diners. Less emphasis was placed on stainless steel in favor of wood, stone, brick and copper trim, inside and out.

In 1982 the Tamarack resurfaced as the Amwell Valley Diner at its current location on Route 31, and was put on the market for sale seven years later. Simon Siliverdis, who had operated diners with his brothers during the 1960s and 1970s, thought it would be fun to run the Amwell Diner “for a few years.” Those few years passed quickly. Members of the Siliverdis family celebrated their silver anniversary of ownership in April 2014 and recently marked their 30th year as owners and operators of the diner.

After finishing brunch followed by a bit more conversation, we bid farewell to Aglaia, Simon and the waitstaff. “See you next time,” we said, well aware that we don’t often pass through this neck of the Jersey woods. Still, the hope is that the “next time” will be less than eight years from now. It was a good thought to consider. We headed towards the artsy village of Lambertville for further Garden State adventures on a stifling Tuesday morning in mid-August.