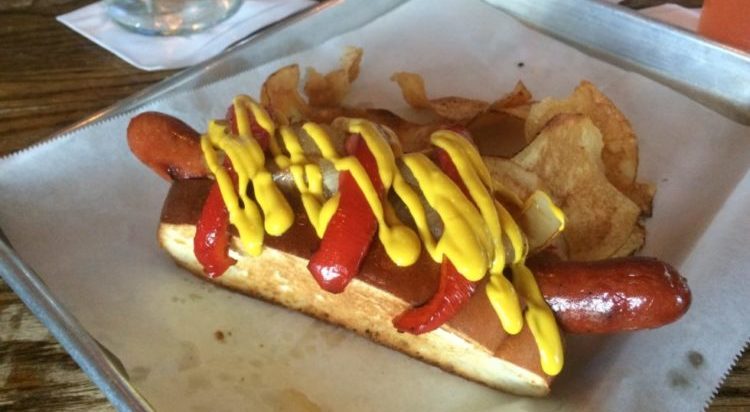 Ahh. Can you smell the hot dogs cooking?

A well done hot dog in the backyard is a yearly rite of passage, but don’t get stuck at your grill all summer long. There’s another tradition that needs to happen, too. Road trip!

After recently reviewing the famous Max’s Bar and Grill, I got in the mood to see a few more famous NJ hot dog stops. Here are a few more of my favorite iconic hot dog destinations across New Jersey! 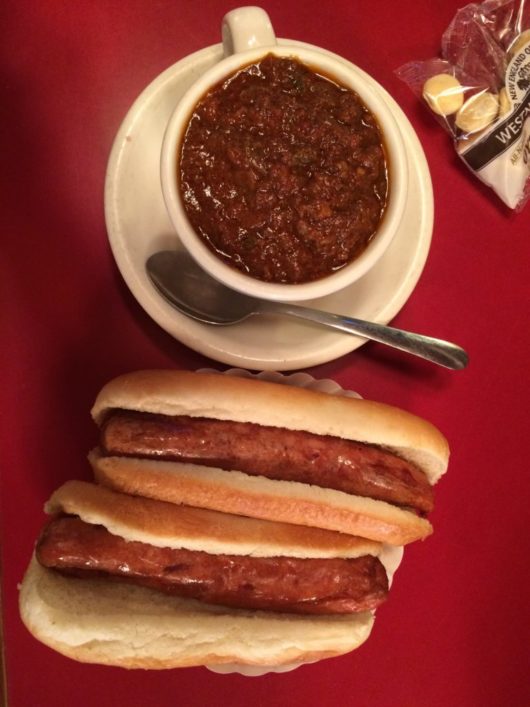 Rutt’s Hut consistently rates as one of the best hot dog stands not just in New Jersey, but in America. They deserve the reputation. This roadside joint has served deep fried hot dogs since 1928. There’s some real history here. It’s the kind of place your great grandparents went to chow down and make out in the parking lot after a Friday night football game (gross, perhaps, but also true). 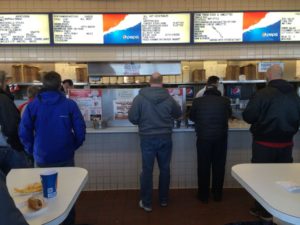 There are two entrances, so take your pick. One leads to a classic lunch counter for standing and eating a quick meal. The other side leads to a bar with tables and stools where you can settle in and enjoy a beer with your food. The kitchen fryer is between each room with a large, open window for churning out their famous Rippers. That’s the local term of endearment for the pork and beef Thumann’s hot dogs whose casings split the longer they cook in the fryer. The only topping you need here is the perfect homemade relish, always available in little jars along the counter. Forewarning–expect a little attitude with your service. It’s an essential part of the experience. 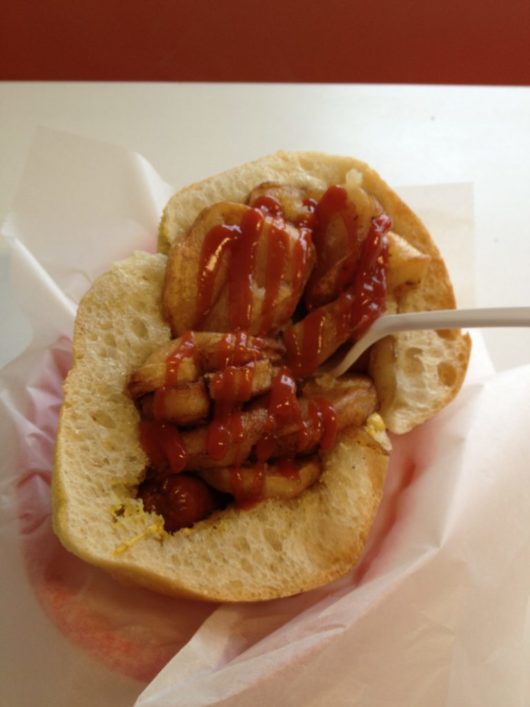 A Newark style double Italian hot dog with the works is one of the small pleasures in this life. If you’re unfamiliar, be on the lookout for an upcoming article on the history of this Jersey original concoction. In the meantime, go to Jimmy Buff’s for a hands-on learning experience in the place where it all started back in 1932. Head there on a Tuesday for double portions at single prices. 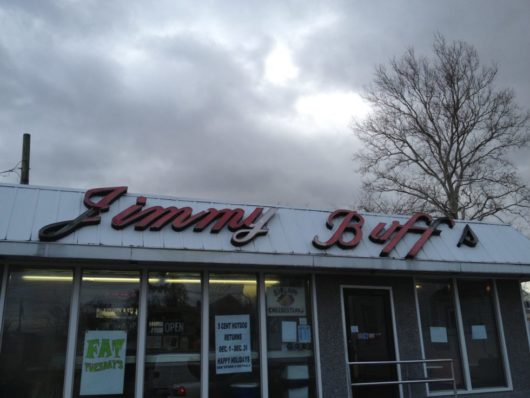 If the answer to the “Is a hot dog a sandwich?” debate exists on a continuum, then the Italian hot dog falls squarely on the sandwich end of the sliding scale. Expect a large pizza bread roll stuffed with fried Best Provisions hot dogs, then filled with cooked peppers, onions, and sliced potatoes. I’ll actually put ketchup on this meal, which in some circles is a hot dog sacrilege. But what’s a fried potato without ketchup? To each his own… 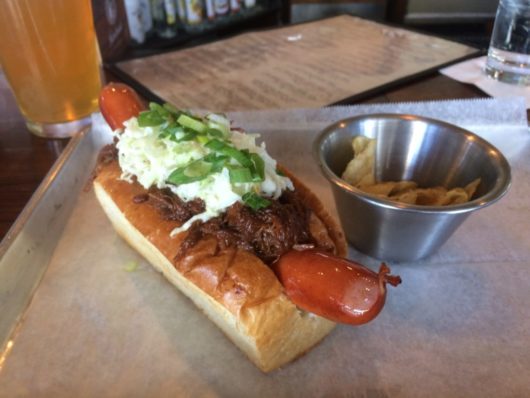 You don’t have to travel around the world to get world class sausages and hot dogs. Heck, you don’t have to go any farther than New Brunswick. Go in for a landing at Destination Dogs. They make the gourmet sausages themselves, and the hot dogs come dressed in the flavors and ingredients of world cuisine. 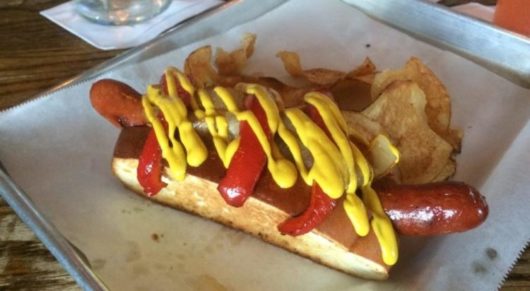 Who doesn’t love a good theme restaurant? They list the hot dogs under either the domestic or international heading on the menu. Each one has a punny nickname according to the serving style of a city, and categorized by its airport. So, order the Conquistadog based on the flavors in Barcelona, Spain (BCN), and you’ll receive a chorizo sausage topped with patatas bravas–fried potatoes dressed with spicy mayo. The Italian Gladiator (FCO) is a wild boar sausage with broccoli rabe and provolone on top. Want some flavors from closer to home? The Scarlet Bite (JVI) pays homage to the grease truck fat sandwiches at nearby Rutgers University by loading an all beef hot dog with cheese sauce and french fries, plus a few more sloppy condiments. 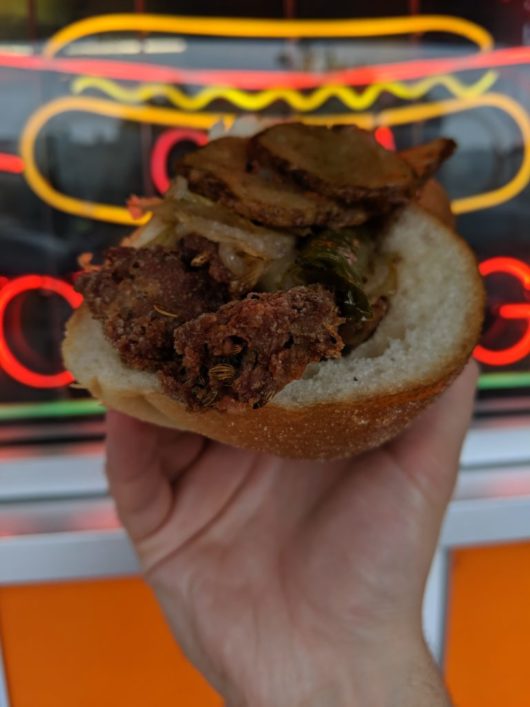 There’s a well loved tradition in the world of roadside restaurants. Set up competing stands directly across from one another and develop hardcore rival bases of enthusiastic adherents to either one place or the other. Personally, I always split the difference and visit both places whenever I encounter such a scenario. Such is the case along 2nd Avenue in Elizabeth, NJ.

You may feel like you’re playing cat and mouse when you go for the double dip at Tommy’s Italian Sausage and Jerry’s Famous Frankfurters, which is just steps away. (But don’t let anyone catch you going from one to the other!)

On the one hand, Tommy’s serves a classic Italian hot dog that’s worth its weight in gold. On the other hand, Jerry’s famous chili dogs have earned renown and acclaim.

Both restaurants serve Best Provisions hot dogs. Tommy’s deep fries, while Jerry’s uses the griddle. There’s standing room only at each restaurant, but there’s a nice little park across the street with a bench where you can enjoy your food. You’ll know you’re in the right neighborhood because the aromas mingle and waft down the street. I’m not sure how anyone could walk by either place without stopping. 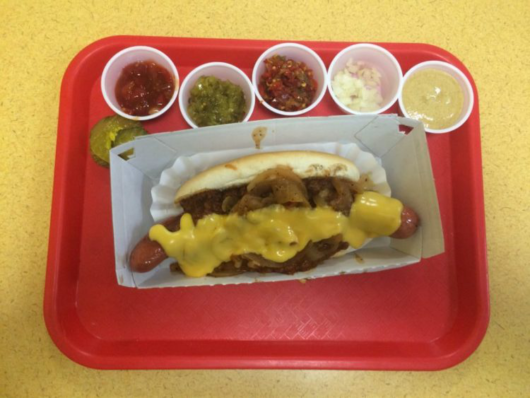 This Jersey shore staple food is now operating out of at least six locations, but the original iconic spot with the big red windmill atop 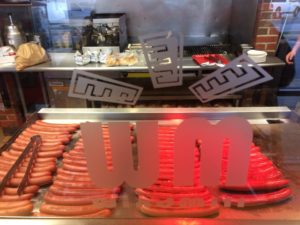 the roof is in Long Branch. Like much of its competition along the shore (Max’s is right down the block), Windmill Hot Dogs serves big, griddled hot dogs. They char in a row on the flat top until the casings split. Windmill uses Sabrett’s, and while you can pick them up at your local supermarket under the Windmill branding, you’re not likely to get the same effect cooking them yourself as you will get at the restaurant. There’s just something about that grill… Windmill offers a wide range of other treats like onion rings and a crispy chicken sandwich. I’m told it’s pretty good, but I wouldn’t know. I can’t resist a hot dog with a healthy dose of the fixin’s spread they always have laid out. 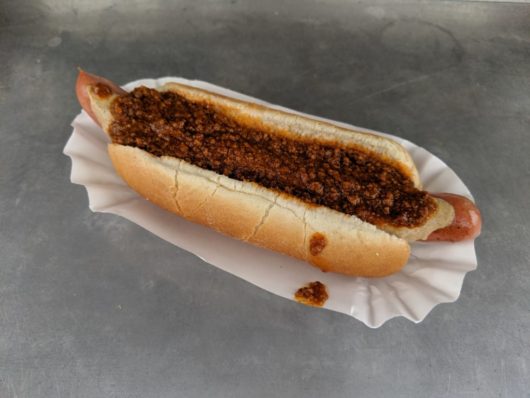 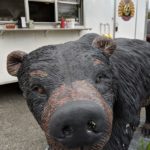 It’s the kind of spot you randomly see one day and decide to pull over, probably because of the giant bear statue out front. Afterward, you never forget what it means to eat at Bear’s Hot Dogs. Now in its 48th year, this trailer-hitched hot dog stand has been a destination for me again and again whenever I find myself in the area. The Sabrett’s hot dogs with mustard are just what you need when you’re looking for a quick lunch fix, but I recommend getting one (or two) with homemade chili. It’s got the right heat for my taste, and they’ve got hot pepper relish if you want to kick it up a notch.

Editor’s note: As of July 29, 2019, Bear’s will be suspending its regular operations and operating on a pop-up basis going forward. 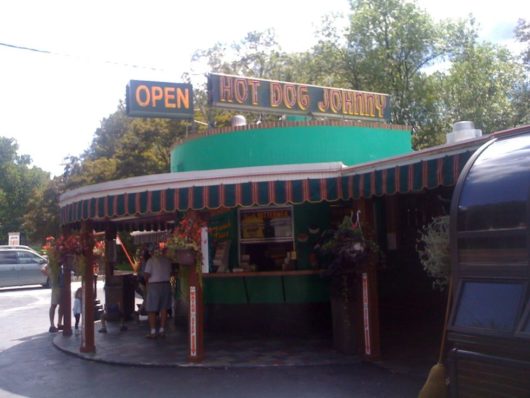 This stand is truly part of the roadside culture that defined the great American road trip since the advent of post-war highways. With its giant, hand-painted signs and its scenic location along the Pequest River, Hot Dog Johnny’s in Buttzville (GPS address is in Belvidere) has been serving ’em hot since 1944 and doesn’t appear to be slowing down anytime soon.

The hot dogs at Johnny’s are one of the few places around where if you hear that they’ve got a “special recipe,” it’s actually true. Schmalz European Provisions out of Springfield Township provides the German style skinless beef and pork frank that they serve up.

Another beloved tradition at Johnny’s to look out for is their slightly sour drink selection. While I always opt for the birch beer, others swear by a glass of the fresh, cold buttermilk that Johnny’s offers to wash down their meal. Sure, I might order some of it to go (I mean, it’s good buttermilk), but I’ll always take sweet over sour when it comes to having a drink at Johnny’s. 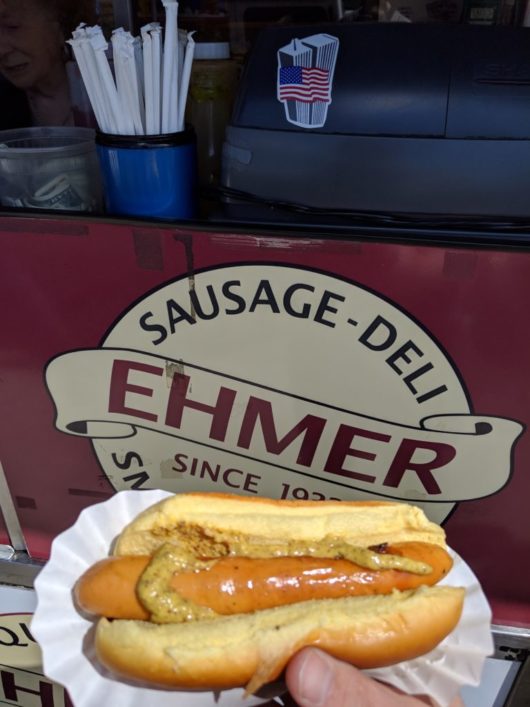 While the hot dogs and sausages at Karl Ehmer here are stellar, they are not actually the star attraction. That honor belongs to Dolores. She’s the 93 year old who dresses to the nines and slings sausage with a smile. She’s at the grill outside this butcher shop six days a week! 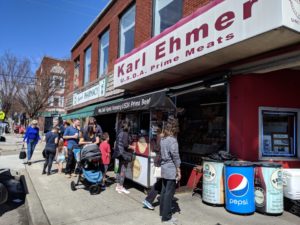 There’s usually a line down the block right around lunchtime. This is with good reason. The aroma of Dolores’s grilled sausages and hot dogs grabs you by the nose at the corner, and you soon find yourself floating over like a hungry cartoon character to wait with the rest of the crowd. It’s actually a brilliant marketing strategy. After grabbing something good outside (and it’s all good–I recommend the beef and pork mix German style hot dog, and a bratwurst), you can then head inside and purchase any of the sausages and hot dogs you sampled. If you’re feeling exotic, you could even pick up game sausages like ostrich, elk, or venison from the butcher counter to cook up at home. 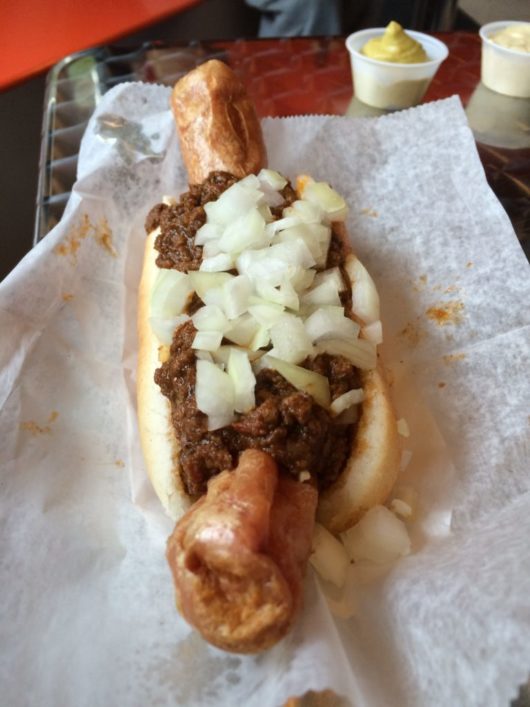 Folks who have been at the hot dog game for awhile will recall the deep fried Callahan’s hot dogs they used to enjoy at one of multiple locations across North Jersey way back in the day. The tagline from the 1950s was, “So Big, So Good!” and they weren’t lying. Heck, even I can remember getting one at the Route 17 spot when I was really young and thinking to myself that it was something special.

Eventually, though, all of the Callahan’s locations closed down. It seemed that we lost a cultural institution forever, until the grandson of the original proprietor revived his family’s brand a few years ago. 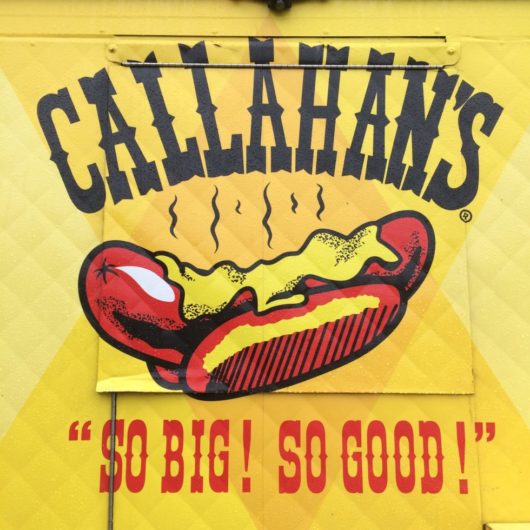 The dogs are just like I remember. However, with an updated menu that reflects zany foods like a Stuffed Truffle Mac and Cheese Burger Ball, plus fresh, homemade sides and condiments, I’d argue that Callahan’s is not only back–it’s better than ever. 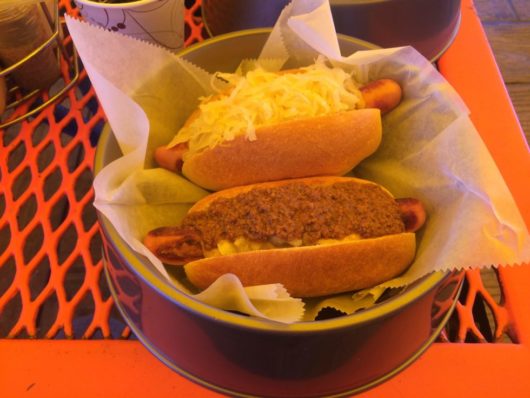 You might take umbrage at eating out of a dog bowl. However, that would only be until you’ve tried a hot dog from Maui’s Dog House, served in such a manner. Then you will eat them again and again on whatever kind of platter you can get them!

Television shows and countless writeups have featured Maui’s, but they haven’t let their fame get in the way of serving a high quality German frank. It’s a mixed-meat combination of pork, beef, and veal. 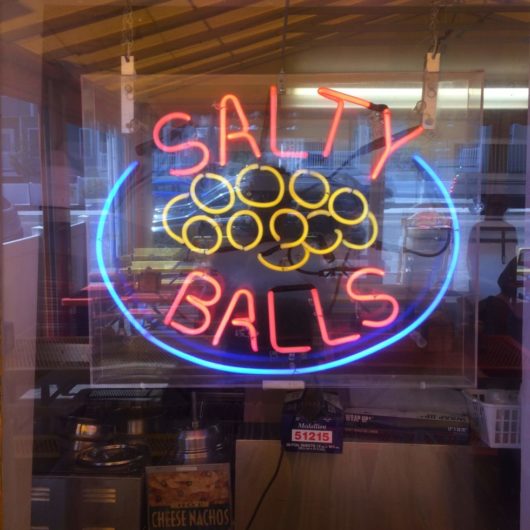 In addition to a wide variety of homemade toppings and unique serving styles, they make a strange potato side known as salty balls. It’s golden taters soaked in brine then cooked and served with drawn butter. I’m just going to say it. They’re better than french fries, and you can only get them here. So make your way to Maui’s!