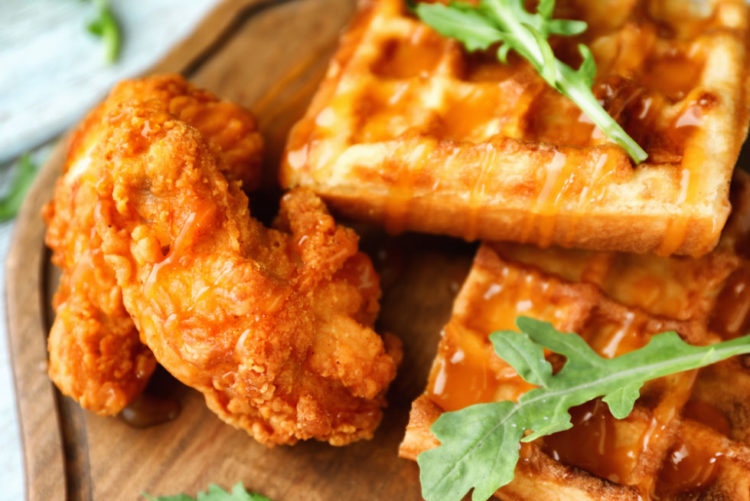 When you think New Jersey, you probably think crispy pizza and fluffy bagels. But the Garden State is hiding something else behind its restaurant doors: Chicken and waffles. In honor of International Waffle Day, here are some of the best places to find the southern staple throughout the state.

The outside of Griot Café might fool you into thinking it’s just another coffee shop, but the food proves it’s much more than that: particularly the chicken and waffles. The restaurant sets itself apart with its Creole chicken and waffles; the dish has a kick to it, but it’s not overwhelming. It’s paired with a side of mangoes to finish out that sweet and savory combination. This place definitely sees a wait on the weekends, but the generous portions and unbelievable taste make it worth it.

The best thing about South + Pine? Their chicken and waffles is available any time of day. The crispy chicken is served with a sweet potato waffle for a dish that’s more savory than sweet. Harissa honey completes the meal, and the smoky spice of the harissa, plus that touch of sweet honey, brings the whole dish together.

The chicken and waffles at Cyndia’s, in Totowa, is a generous portion that satisfies anyone’s savory breakfast craving. Drizzle it with “comfort syrup,” which is sort of a middle ground between syrup and gravy, for a sweet way to top off the dish. This is another place where you can expect a long weekend wait, but with a dish this delish, you won’t mind sticking around.

Twisted Elm has two different chicken and waffles dishes in which you can indulge: the chicken and waffles served with agave syrup, which is available on their brunch menu, or their chicken and waffles sliders paired with creamy slaw and bacon jam—an appetizer on the dinner menu. Both are worth trying, so plan to make two trips. One thing to note: the brunch dish is $18, which is a bit pricier than others on this list, but you won’t question it when you take that first flavorful bite.

4 Brothers Breakfast is the kind of place where you’ll want to make a reservation if you’re heading over on a weekend. With the chicken and waffles, you’ll have more than enough on your plate to satisfy even the biggest appetite. This place has a whopping six different chicken and waffles options on its menu. Carrot cake waffle, chocolate waffle, red velvet waffle—the options are (almost) endless.

Hatch 44 has one of those dishes that you should never go your whole life without trying. This place takes chicken and waffles to another level; they call it the Chicken’s Scoop and it pairs buttermilk fried chicken and waffles with house-made bacon jam, avocado, and maple mustard syrup. The waffles are then topped with two eggs, and a side of potatoes completes the dish. It’s arguably the most distinct chicken and waffles pairing on this list and worth the drive even if you’re not in the area.

This Fords chicken and waffle shop has a fast food vibe with high-quality food. Diners can choose whether they want wings or tenders with their waffle, plus their preferred sauce. There are nine sauce options, including honey garlic, golden BBQ, Carolina reaper, and buffalo. If you’re looking for more of a lunch or dinner meal, pair it with a side, such as mac and cheese, corn fritters, or fried pickles, for a southern-style dish.

22 West is one of only a few places on this list where you can get chicken and waffles as an appetizer. This tavern-style eatery serves up chicken and waffle sliders, which includes herb-marinated chicken served between two Belgian waffles. The chicken is topped with a chipotle maple syrup for a sweet and spicy kick. The sliders are pretty filling, but you can order either two or three, depending on how hungry you are.

Kelsey and Kim take soul food to another level at their Atlantic City restaurant, and the chicken and waffles are the perfect example. You’ll be hard pressed to find a customer who doesn’t rave about the chicken’s perfectly crispy, non-greasy crust. The chicken’s savory seasoning complements a sweet waffle, which is crispy on the outside but light and fluffy when you take that first bite—it exceeds all expectations. The restaurant was once featured on Food Network’s Diners, Drive-Ins and Dives, and it’s a place you won’t want to pass up.

You haven’t tried chicken and waffles until you’ve tried Kitchen 519’s buffalo chicken and waffles. Spicy meets tangy meets sweet with buffalo fried chicken, blue cheese crumbles, red onions, and scallions served over a fluffy Belgian waffle and topped with ranch dressing. And those with other preferences can choose from several versions of the dish. If you’re feeling a traditional option, order the classic chicken and waffles—the sriracha maple syrup is an unforgettable touch. For something a little more upscale (and filling), try the chicken and waffles benedict, which kicks up the classic order with poached eggs and hollandaise.

Kitchen87 not only has some of the best chicken and waffles in the state, but you get a heaping helping for only $9. The chicken here has more of a crisp than the other dishes on this list, but it pairs perfectly with a softer waffle for the ultimate breakfast or brunch dish. The waffle isn’t dry, either; this place is doing things right. Don’t be turned off by the crowds on weekends—service is always quick.