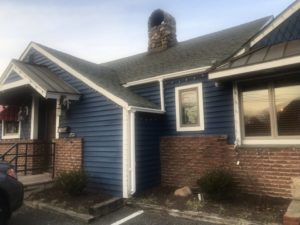 The bar is pretty long. At one end sat two folks well planted for who knows how long. Smack in the middle was a single man, so I took up the near corner where two stools sat tightly, side by side, and separated from the other barstools by a brass handle of sorts that was built into the bar. It felt cavelike inside: dark and warm with raw Edison bulbs boldly glaring in the otherwise dim space.

Hannah, who’s been there a couple of years now. Sweet, if not a little timid for a bartender of such a local refuge. Her partner in crime, Ashley, was the complete opposite: spitfire and self-assured. Not even sure if Ashley was working but she piped in when I needed a firm response, as you will soon find out.

When I asked Hannah what she loved on the menu she said, “Well a lot of people order the…”

“Stop! Can’t be hearsay,” I said. “Must be first hand experience from you,” I said strongly, almost taking her aback.

And from nowhere, Ashley appeared, saying, “Well Hannah’s a vegetarian so there isn’t a lot she can really enjoy.”

Hannah quietly added, “I was gonna say the brussels sprouts, actually.” I had literally just ordered them as I was moments away from full-on-hangry status.

“Why?” I query to dig into her brussels sprout affirmation.

“Because they’re good?!” she says in a half-question, half-statement way with shrugged shoulders as she looks to Ashley.

I turned to Ashley to ask the same and she said, “I like the sampler—it has shrimp and scallops and clams. Really filling and good.”

The Vibe and My Vantage Point

The Ark has a deep, dark, bar feel that intersects neighborhood fisherman’s bar and cozy hideaway found deep inside the borders of Maine.

Bullseye. Again, many flavors I love except they replaced the honey with simple syrup, which made it slightly more ordinary although for my flavor preference. Can’t go wrong with the basic combo of gin and St. Germain—it’s my jam!

Brussels Sprouts, $9.95 (on Specials-Tuesday menu)
Fried and tossed in a balsamic wasabi sauce

I am a sucker for brussels sprouts. It’s an odd love, perhaps, but I’m done for when offered a brussel of any style, any version, any time, any place—I gleefully indulge. The portion was gargantuan—like an entire pound of brussels it seemed. Gorgeously crisp-yet-tiny little heads, still visible beneath their crispy, leafy cover. The depths of color were sumptuous and the aroma wafting up from the vinegary-sweet balsamic was intoxicating. Indeed, the entire tasty experience was a joy, especially the combo of crispy leaves and slightly al dente baby brussels. I could not at all detect the wasabi, which was a bummer as I was curious to see how this combo played against the textures. Alas, maybe next time.

Not what I expected was the thought bubble that would have burst had Hannah read my facial expression. I sort of felt like a kid whose parent just got her the best purple balloon ever and before I could even feel its weight in my hands, it floated to the heavens above—me staring in both disappointment and wonder. I had envisioned mounds of gorgeous tuna, in a fine teriyaki glaze, donned with wasabi flecks, over a seaweed base. Nope. Not even close. The presentation was seared tuna atop—oddly—almost julienned spinach salad with raw onion. The wasabi “drizzle” was more of a haphazard splash across only one piece of the tuna. While the tuna was tasty enough, the rest of the plate was so distracting I simply tried to eat around it. Ultimately, I enjoyed the tuna, seaweed, and fresh avocado but left the spinach salad and red onion as they didn’t complement the dish for me. To each their own, for sure. 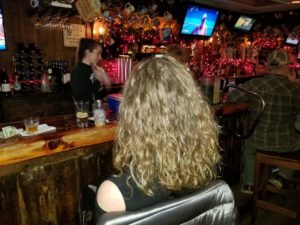 With Ashley’s added tidbit about this and since I was experiencing a case of menu fatigue, this is what I ordered as my third and final taste of the evening. I never do well with clams casino. I guess it’s because I don’t like the peppers—I think they overwhelm the clam every darn time. Yet I persist and order the sampler despite their presence. The dish arrives and looks good enough. In retrospect, I should’ve ordered a burger or something hearty.

I take a long look at the clams casino on the plate and then bypass them, looking instead to the gorgeous and substantial shrimp. I dig in and to my delight, it was the perfect cook. I am a stickler about my shrimp consistency, especially when it comes to shrimp cocktail and scampi. And grilled. And sauteed. I know–I feel like Bubba in Forrest Gump! Anyway, they were really nicely done.

I move on and as I take my fork to the clam I cannot identify what is resting on top of the bready filling. I lift it with my fork and while it resembles slightly melted cheese, it takes me a moment to identify it as the fatty bit of a bacon slice. I move in and taste. Bingo. The clam was as I expected—not my thing but am guessing for those who love clams casino this one was up to snuff. The scallop was a bit “meh” and while I didn’t see stuffed clams, there were two larger-than-cherrystone-sized clams that looked roasted. I was already done so made no attempt to eat one.

Check with the bar for details and changes.

A decent variety of grapes and labels including the following:

What Else to Know

Just past the original Brave New World, the Ark is on the northbound side of Route 35, just past the bend in the road where McDonald’s and Wendy’s distract. Guests can park in the few spots in front or across the street in the lot marked with the Ark’s sign. 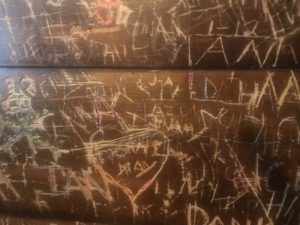 Know Before You Go!

Hours, prices, and menus are subject to change.