As a child growing up in Monmouth County, I heard the words Bell Labs many times over the years. Those words usually came from one of my friends when they were talking about where their parents worked. That’s all I knew. It was a place where a lot of professional people worked. I didn’t know anything about the amazing building, which was designed by 20th-century architect Eero Saarinen, or all of the Bell Labs innovations that many feel changed the world. 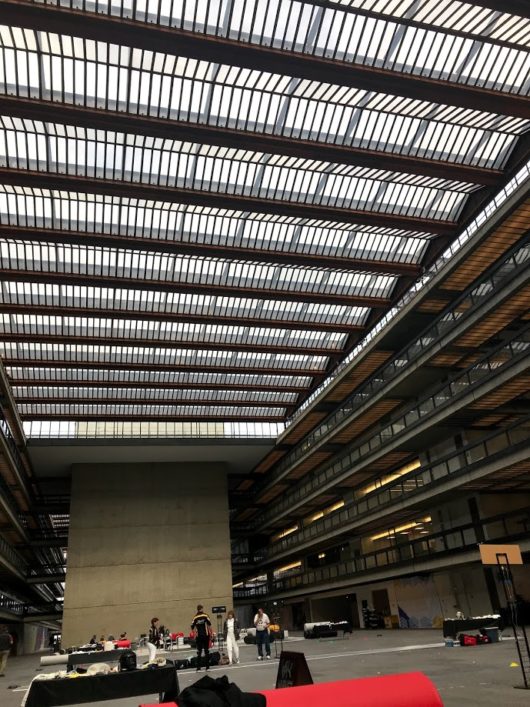 More than 50 years went by before I finally set foot inside the awe-inspiring structure. The reason for my visit was to check out the new 6,000-square-foot, upscale food court called Bell Market (of course food would get me there), while it was still under construction back in the spring. I met husband-and-wife team Richard and Chantelle Corbo, and they introduced me to their dream concept and team.

Bell Market is the work of a group of esteemed chefs and a sommelier (Chantelle) who, collectively, have worked at Union Square Cafe, Upland NYC, Gary Danko, Michael Mina, and Bien Cuit.  At Bell Market, they bring their combined expertise and refined palates to an upscale, re-imagined food hall concept.

Here you will find your trendy bowls and salads and all the good-for-you fare that your heart desires. You have your choices of grains, veggies, and proteins in a variety of combinations.

Crossing over from the healthy side to the I’m-going-to-need-a-nap-after-this side, is Bubz Deli. House-made bagels, smears, and the sandwiches, oh my. Take, for instance, the Bubz Pastrami Rueben (pictured at left), warm pastrami, kraut, midnight moon gouda, Thousand Island dressing on house-made rye focaccia. I didn’t think I would finish it, but I did. (I’m not proud of myself but it was so damn good.) Bubz is most definitely a 10-napkin affair. You’ve been warned.

More 10-napkin fare coming up. I don’t like using social media slang, but OMG, the ramen at Jozu is heavenly. They also serve poke bowls, hand rolls and more, but the ramen is the memory I hold very dear. I had to find out more about this heavenly potion from Chad Spencer, Chef/COO of RBC Hospitality Group. The following is his secret to the luscious ramen broth you will experience at Jozu.

“When I began making our broth for Jozu I started with the classic tonkotsu broth, which turned out really good, but I wanted to have something that was my own take on that classic broth and maybe set me apart from all the other ramen shops in the area,” Spencer said.
“I still use 100% pork marrow bones but add many heavily charred aromatics to our broth, which is not the traditional way of making it,” he explained. Generally tonkotsu broth is very light and creamy colored, and all of the aromatics are added in to the tare, which is a highly concentrated flavor base that’s added to the ramen broth right before serving. Essentially it’s the “proprietary” seasoning base that makes each ramen joint’s ramen unique. It’s very concentrated and inedible on its own. The tare is then added to the broth just before serving adding in flavor or seasoning.
“I, on the other hand, add the aromatics to both the broth and the tare, which in turn gives our broth a darker color due to the charring and the sugars in those aromatics caramelizing throughout the simmering process,” he continued. “I feel this gives the broth its own additional level of flavor, and I do, of course, also add my own tare in as a final seasoning component as well. This method is a personal preference based on the years I have been making traditional French stocks and sauces combined with what I have learned about the process of making traditional ramen. The broth we have settled on turned out really good even if its a bit different from the traditional method. But I’ll let the public decide on that for themselves.”

4. Corbo & Sons: Wood-fired Italian fare with an emphasis on pizzas (both Roman- and Neapolitan-inspired)

What struck me right off the bat, after my first bite of Corbo & Sons pizza, was how delicious the crust is. I promise, you will eat every last bite of this pizza. I needed to hear more from Richard Corbo on what makes his crust so special.

“We wanted to find the right balance between tradition and what works for the local palate, so we bought Naples-made ovens and started with the classic Naples-style pizza. But we didn’t want to make something that was light and airy because I felt that in Jersey, people want some chew, some tear, some crunchiness. They want to be able to fold and pick it up and none of those characteristics work for a Naples-style pizza. Half of our customers are putting pizza in a box. We believe we’ve found the right balance of ingredients and cook time. We’re hitting all the flavor notes and texture notes.”

I wholeheartedly agree and I think you will, too. In addition to delicious pizza, Corbo & Sons offers wine, beer, and hard ciders.

Let’s end on a sweet note, shall we? Baked pastries, cookies, pound cakes, and oh, the bread. Honeybell has a number of to-die-for sandwiches served on its fresh-baked bread. If you’re going to indulge in a pastry, my favorite was the Morning Bun, filled with homemade orange marmalade and pastry cream scented with orange blossom water, orange zest, and vanilla. It’s just divine.

Bell Works is open to the public. In addition to Bell Market, the Monmouth County Library is now located in the building and the Bell Works Fresh Holiday Market is also happening on Wednesdays this month. Find out more here. So many reasons to visit. Stop by for a loaf of bread, a cocktail, or an amazing meal at this party for all the senses.

While we’re on the subject, wine lovers can sign up online or in person, at their monthly tastings.

Each subscription comes with a Bell Market six-bottle reusable wine bag and Chantelle’s wine notes (inluding info on the wine maker, entertainment recommendations, how and when to serve the wine, and pairing suggestions). Get a free bottle with a six-month subscription!

For December, in addition to the next curated selection of wines, Bell Market Wine + Spirits Club will also offer a December cocktail pack complete with all of the elements needed to make Chantelle’s favorite holiday cocktail.

Hours are subject to change.