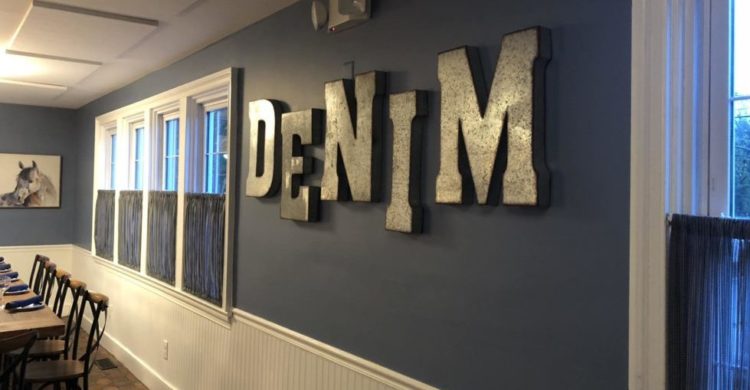 When someone suggested “cookies and milk,” Executive Chef David Murray stopped to consider. He had surveyed locals on WhatsApp to hear menu ideas for Denim American Bistro, a new BYOB located in the historic Cherry Hill building that once housed La Campagne and the Farmhouse. The respondent clarified: nothing trendy or complex. No fancy brown butter bourbon. No white-chocolate macadamia. Just old-fashioned cookies. 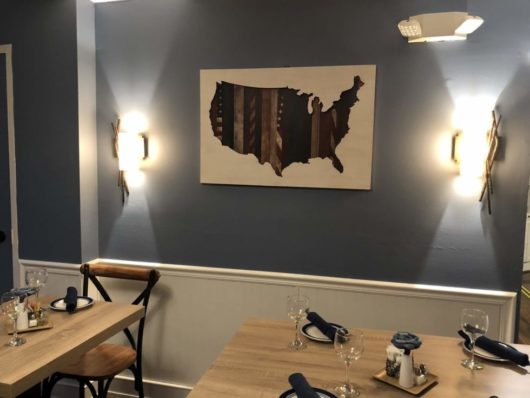 The idea that the traditional can be inspired and fresh intrigues Chef Murray. There’s something both unusual and comforting about Denim’s house-baked chocolate-chip cookies and milk. After all, not a lot of up-and-coming restaurants include items so basic on their menus. Following a pre-opening dinner, the wait staff served them for dessert to our group of local food writers. 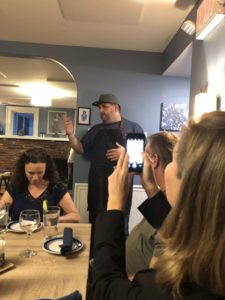 Comfort is a good word to describes Denim’s vibe—cozy, intimate, and decidedly Americana—with a modern spin. Chef Murray purchased the property, originally built in 1858, earlier this year. Before opening Denim, he had the building’s hardwood floors refinished and installed noise-reduction panels on the ceiling.

The freshly painted walls, like a pair of jeans, are Levis-blue. They display framed photos of iconic American celebrities. Behind my seat hangs a collage of classic Time Magazine covers, including one featuring Steve Jobs. Another wall displays a 2001 photo of Britney Spears and Justin Timberlake. As I walk around the restaurant, I spot Michael Jackson, Marilyn Monroe, James Dean, Anthony Bourdain, Mila Kunis, and a horse. Most (horse excluded) sport denim.

I’m struck by Chef Murray’s candor when he reveals it’s his first time making the foam-topped butternut squash gnocchi he serves us. A Cherry Hill resident and father of two, Chef Murray honed his culinary skills as a graduate of the Academy of Culinary Arts in Mays Landing, and then served as executive chef at several area restaurants, including Georges’, the Gables at Chadds Ford, Hawthorne’s, The Cambridge, and Legal Sea Foods. He also served as sous chef at The Water Club Hotel under Geoffrey Zakarian of Iron Chef fame.

The kitchen at Denim hasn’t yet been inspected at the time of our dinner, and so Chef Murray is limited in what he can cook. But scarcity breeds creativity, and Chef Murray and Chef de Cuisine Ed Stein invent new recipes, experimenting with flavor combinations and hoping for the best. Chef Murray implores us to be honest when we offer feedback.

The familiar and the innovative seep into each bite. The meal, like America, is a melting pot of cultures. In addition to the gnocchi, we sample ahi tuna crudo topped with avocado and jalapeño. Chef Murray jokes that the dish is their self-deprecating way of “poking fun” at themselves with the awareness that they’re not a real sushi restaurant. 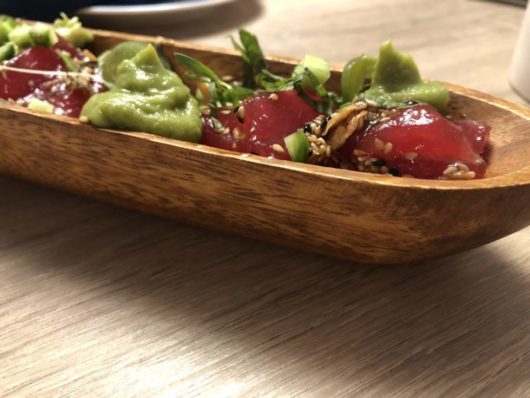 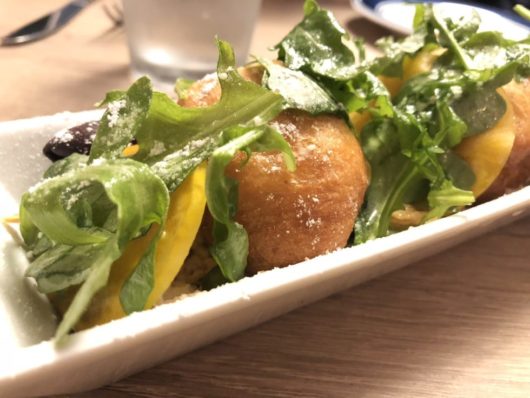 No one at our table has any complaints about the food, except to say that the octopus is on the tough side. Chef Murray accepts the feedback without offense. The standout of the meal is an unexpected one: crispy brussels sprouts. The sprouts, cooked with bacon, are bathed in a creamy mustard sauce and topped with Manchego cheese. The room buzzes with praise for them. Everyone at our table—myself included—reaches for seconds.

Denim’s menu includes options for individuals with dietary restrictions and food allergies. Chef Murray makes a point to tell us the rich flourless chocolate cake they serve is gluten free. As he speaks, his kitchen and wait staff stand beside him. “I try to accommodate everyone if I can,” he tells our group. He leaves the impression of someone who is welcoming and laid back. 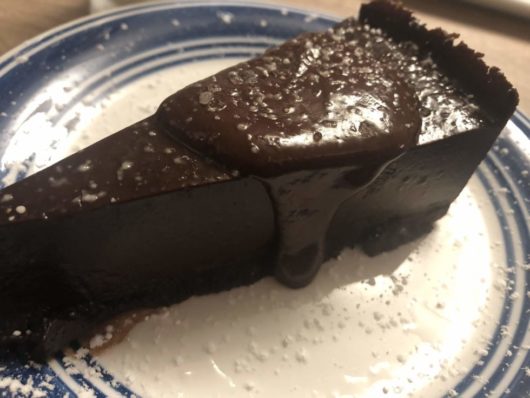 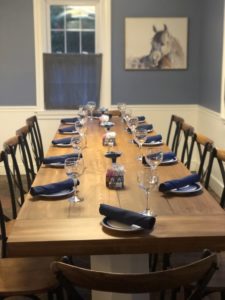 When you eat at Denim, bring an extra pair of new or gently used jeans. The restaurant will donate them to Teens for Jeans, a nonprofit serving homeless teens. You’ll score a complimentary dessert in return (when you order from the prix-fixe menu).

Bring friends, too! The restaurant, which seats 86 diners, welcomes visitors with its warm ambiance. Diners with diverse tastes will find something to enjoy: this includes both those who enjoy traditional fare and those with more adventurous palates. Most of all, bring along a willingness to try the creative dishes on offer at Denim American Bistro.

Lunch and Dinner
Tuesday through Saturday: 11 a.m. to 9 p.m.