If you live in southern New Jersey you know that we are all very lucky to have countless restaurants which are BYOB—and many of them are incredibly good. We are also lucky to have the lion’s share of the state’s 49 wineries in the vicinity. On Saturday (National Pumpkin Day) my wife, Carol, and I celebrated this fortuitous intersection of food and wine and pumpkins with two dear friends.

We have been coming to Femmina, in Medford, for several years now. While this restaurant boasts an extensive menu of equally well-done options to choose from, the Pumpkin Feast in the fall (from Labor Day until they run out of pumpkins) is one of my favorite meals of the year. 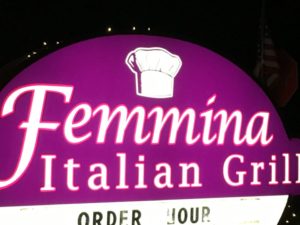 My writing generally focuses on New Jersey wines, so I won’t deviate far from my usual game plan. In fact, I immediately knew which two New Jersey wines I wanted to bring with us (like Billy Joel, I bring a “bottle of red, bottle of white…”).

The white wine I chose was the Pumpkin Hill Chardonnay from William Heritage Winery. In addition to the obvious name, I chose it for its rich, creamy taste and mouthfeel which I knew would complement the rich and creamy sauce that coats the contents of the pumpkin (more on that later).

The red wine was an easy choice. I knew their Italian offerings (from traditional entrees, antipasto, breads, etc.) would go well with one of my favorite Sangiovese wines anywhere—Turdo Vineyards & Winery’s Sangiovese. This wine is a bolder, more full-bodied Sangiovese than many others (and smoother). 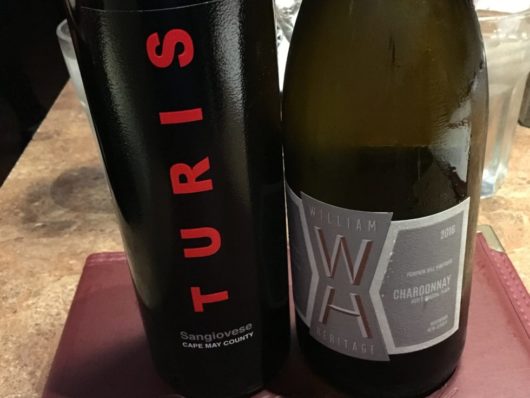 Off to a Good Start

Before putting in our order for appetizers and entrees, our waitress brought out the usual cornucopia of huge garlic knots and bruschetta. While we knew the gargantuan size of the entrees (I finished mine the next night for dinner), we couldn’t resist trying their antipasto. 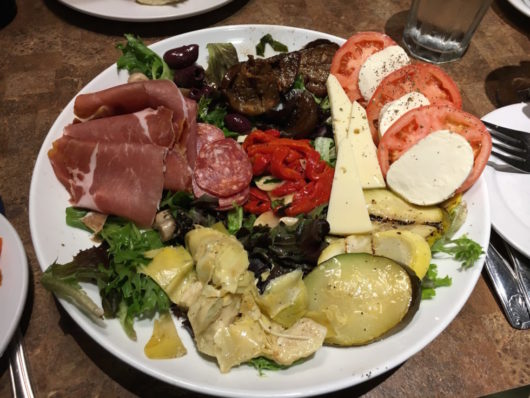 The antipasto consisted of prosciutto, tomatoes, fresh mozzarella, artisan cheeses, pepperoni, olives, roasted peppers and marinated artichokes, mushrooms, eggplant, zucchini, and yellow squash. My wife and I shared this mouth-watering appetizer, knowing we’d wrap up at least half of it to go. 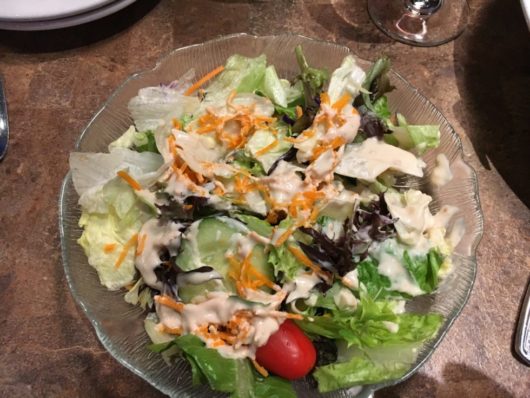 Our salad was simple—mixed greens, shaved carrots, cherry tomatoes and a choice of dressing. 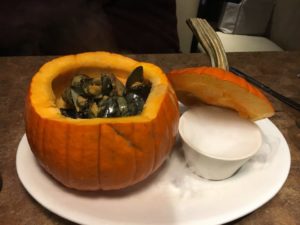 The star of the evening arrived in a hollowed-out pumpkin, with the top cut off to access the goodies inside. This was worth our half-hour wait to be seated (they don’t take reservations for parties smaller than six people). The pumpkin was filled with shrimp, scallops, mussels, and mushrooms smothered over a bed of lobster-filled tortellini and coated with a creamy sauce, containing tiny chunks of pumpkin and just a hint of sweetness, which actually enhanced the natural sweetness of the seafood.

Note: The small dish next to the pumpkin contained dry ice and was emanating smoke when served. Now that’s ambiance.

One would be hard-pressed to even consider a dessert after consuming the feast described above. If I had, I would have chosen the Big Blitz Pie with Snickers Bar. It contains large chunks of Snickers bars, fudgey brownie, caramel, peanuts, and a tart cream cheese filling. Okay. My wife and I did order and finish one of these, but I neglected to take a picture of it.

What a great meal! Time to head for the gym…