Food insecurity is an invisible problem. While it’s not as graphic as the images of bloated bellies and vacant eyes we used to see on TV breaks, it is a serious problem and it’s right under our noses. Here. In New Jersey.

According to the Community Food Bank of NJ, about 900,000 New Jerseyans make tough choices every day. Do they skip a meal of their own in order to feed their children? Some seniors decide between medicine and food. This is what it means to be food insecure. It’s hard to concentrate on anything when you aren’t sure where or when your next meal will show up.

Not Beer and Food, but Beer for Food

What does all this have to do with beer? That’s a question best answered by John Dalsey, the marketing director at Double Nickel Brewing (Pennsauken). While trying to come up with a November limited release beer, the idea of Friends Giving came up. That was the light bulb moment. Dalsey was drawn back to his memory of volunteering for the Sacred Heart Church in Camden at their food pantry. What better time than Thanksgiving to raise money and awareness for the food insecurity problem in the community?

“These are people we could bump into on the street,” Dalsey said, of the people who receive sustenance from local food charities. Indeed, Sacred Heart will be one of the beneficiaries of the proceeds from the collaboration beer as will Cathedral Kitchen, also in Camden, and Philabundance in Philadelphia. While the effort is a local one, plans to make it an annual event and take it statewide are in the works. Dalsey has brewing connections outside the state so perhaps it will spill over to other states in the future.

For now, Double Nickel is teaming with Cape May Brewing (Cape May, NJ), Tonewood Brewing (Oaklyn, NJ), and Urban Village Brewing (Philadelphia). It’s unusual to have so many breweries in on a collaboration beer, but what’s even more astounding is how many of their suppliers are pitching in. “The most gratifying aspect of this initiative is that our suppliers jumped on board,” said Chris Henke of Cape May Brewing. There are 13 companies donating everything from malt to labels and packaging materials, and 95% of the cost of the beer run is donated.

As Dalsey explained, companies like these don’t usually get approached for charitable events. They were eager to help out. It’s also a testament to how strong the brewing community in New Jersey is and to what it can accomplish.

What About the Beer?

Pot-Luck-Style IPA is what they’re calling this hazy, dry-hopped IPA. The malt bill features locally sourced wheat and rye from Rabbit Hill Farms with some Pilsner and oats to round it out. Nelson Sauvin, Apollo, Mosaic, Idaho 7, and Amarillo make up the hop profile. (Pot luck is right!) Grape musk, citrus, and a little bit of a chewy mouth feel is what I’d expect. Add in a spicy note from the rye and it sounds like a pretty interesting beer. It’s a challenging mix of ingredients for any brewer but there’s a lot of experience in this quartet. They hope to net at least $30,000 from the effort.

We tend to think of breweries as stand-alone entities, but there are a lot of supporting cast members. Here are the other partners and their contributions.

The initial 16 oz. can release will be held at Double Nickel on November 8. That’s not the end of the party, though. Check out these events:

The beer will also be available in cans and on draft at retailers and restaurants throughout New Jersey and the Philadelphia area.

The mission statement for the newly formed initiative sums it up: “Friends Giving is our way of turning a little creativity, camaraderie, community, and collaboration into support for feeding families struggling to put food on the table.” 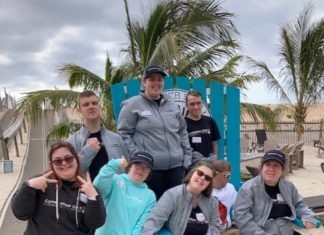