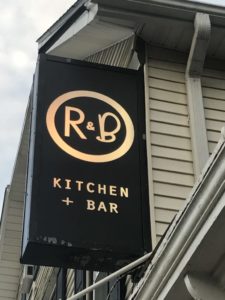 At the only seat left at the bar. As you enter in the center, my spot faced the other side of the bar with its gorgeous bottles display and glass shelves. The bar was vibrant with laughter and conversation, couples, a guy sitting alone eating a burger, and friends gathered to hang for a boozy Tuesday night.

Ali. She worked at What’s Your Beef way back and then returned to R&B’s about two-and-a-half years ago.

“The hangar steak!” When I ask her to elaborate, Ali goes on. “Oh, gosh. It’s just delicious. It’s this beautiful piece of beef and it comes out sizzling on a cast-iron skillet with grilled asparagus and mashed potatoes.” She drifts off as if in a sudden food coma, then snaps to as she remembers she never did bring those ladies their drinks.

The Vibe & My Vantage Point

Russell & Bette’s has a happy vibe, and one that’s deeply local. While a hostess station greeted me it was vacant as staff scurried between bar and formal seating in the dining room—the space was warm. The bar bellowed “come in” and it felt like the people in the dining room were being cheated somehow of the connection the bar people had; it was awesome to step into. 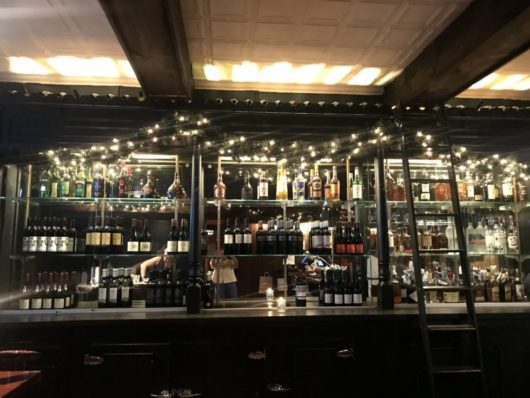 Yes. All. Day. This lovely little cocktail, served in an uber-chic coup glass, was everything I needed on this Tuesday evening. I was already excited for the weekend and this made it, if just for a moment, feel like a Thursday night.

The herby, earthy gin was gorgeously concocted with on of my faves, St. Germain. What made this cocktail unique, though, was the fresh lavender and slight essence of lemon. Sooo good. It’s served well strained, and the daintiness of the coup glass would soon reveal the drink’s potency if one moved to two or three by the end of an eve. One would have been plenty for this mama, but I had a second anyway!

I actually have no clue what they call the spread here but it seemed befitting of “magic cheese spread,” as when I encountered it I felt both starving and whimsical. Feeling like a 10-year-old girl at a friend’s house, I thought, “WE never had butterfly crackers!”

I was immediately drawn in, and the mound of creamy, pinkish-orange spread took hold of my curiosity. I went for it, grabbing my butterfly and layering on a nice schmear of this delightful, creamy, pimento-y spread. Just one was enough. (OK, maybe it was two.)

Seductively plated atop an ever-so-light layer of tomato compote, which I may argue was more of a coulis, the crisp on the perfectly shaped eggplant meatballs was luscious. Panko seemed evident in the crust on these tender, spicy, flavorful appetizer. I would describe it as almost a babaganoush falafel! It was tasty and spicy, and I liked the balance added by the Parmigiano flecks. The portion was just right but I ate only one as I was saving myself for the heavenly salad that was on its way.

OK now it’s been a few reviews in a row where a salad course appeared! This time, it was the bacon description that lured me in. Plus, I was thinking, What’s up with the blue cheese and Russian?! I just had to see and taste it for myself. The wedge arrived and actually wasn’t a wedge at all but a romaine boat topped with the filling described. (However, grape tomatoes replaced the roasted yellow tomatoes.) The construction was brilliant: as you sliced a taste, some of every topping filled the romaine leaf. Blissful, albeit super decadent. Sweet and savory. Crispy and soft. And the bacon with the candied nut was the best “dressed” bacon I have experienced—really brilliant. I would have, however, preferred a less-is-more approach. Chef Peter O’Connell, graduate of CIA took an exuberant approach with this one. It was a touch overwhelming and would only hold up, for me, as a standalone experience. The portion was ideal. I almost finished it but I knew I had one more super rich dish to come.

Served with a side of slaw

Three generous sliders arrived on a plate with a gorgeous purple slaw. I tasted the slaw first and enjoyed the tangy-tartness and essence of vinegar. I loved the fact that Chef Peter allowed the cabbage to stand alone as the only star of this simple side. The lobster rolls were spicy upon first bite with a heavy hand of what I think was scallion. When I took my second, more thoughtful taste, I realized the intention: to provide a more adventurous lobster roll. Generous portions of cut-up lobster meat were mixed and melded with mayo, ample Old Bay seasoning and I think some bits of celery, too. They weren’t my favorite but as a former food festival owner (in Portland, Maine), I am completely biased when it comes to lobster rolls! These were plentiful and tasty, served on a perfectly buttered and toasted slider bun. Most of my compatriots at the bar were more than enamored with this special slider for the night, and I’m sure you would be, too!

Right across from the tennis courts at Victory Park this wonderful, true neighborhood spot seems to be a secret refuge for locals. Leading the kitchen, Chef Peter puts his thoughtful twists on fan favorites. 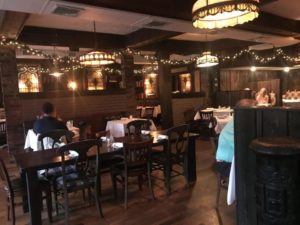 Prices, hours, and menus are subject to change. Please check the restaurant’s website for the latest information available.