RELEASE: Mullica Hill, NJ Four New Jersey wineries will soon debut the state’s first collaborative wine project, a series of Chardonnays dubbed “Open Source.” Produced from the 2016 vintage, the collaboration almost two years in the making will be shared with the press and public for the first time at The Winemakers Co-Op Spring Portfolio Tasting on June 3, at William Heritage Winery in Mullica Hill. Besides William Heritage, the other member wineries of The Winemakers Co-Op include Working Dog Winery, Beneduce Vineyards, and Unionville Vineyards. 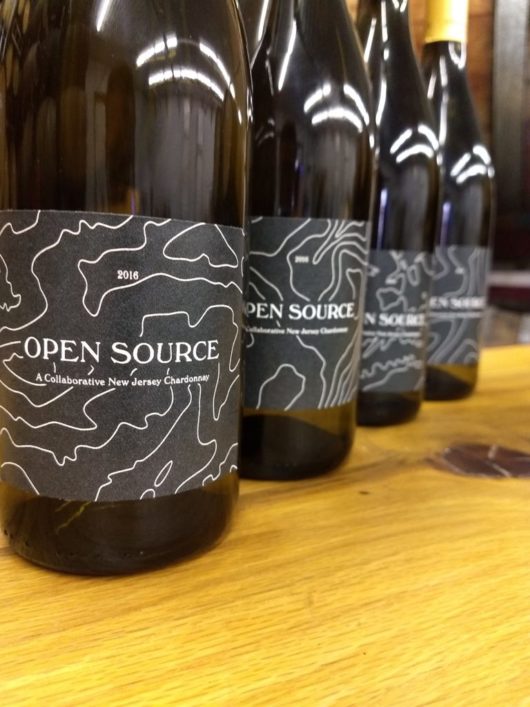 Each winery of the Co-Op grows Chardonnay at their respective vineyard sites. Upon harvesting the 2016 crop, each winery transported 1,000lb of Chardonnay grapes to William Heritage Winery, where the grapes were pressed together. The grape juice was divided equally, and the winemakers of each winery fermented and developed the wine in their own respective styles. The result is four unique wines developed from the same single source of grapes.

“Open Source is a play on the same term from the software world,” said Co-Op Executive Director John Cifelli. “With open source software, developers are welcome to modify the source code to create something, sometimes collaboratively. In our case, the wine grapes are the source code, and the winemakers are the developers.”

Each winery’s version will be slightly different based on barrel usage, choice of yeast, fermentation temperature, and several other factors that decide a wine’s final taste and texture. For Sean Comninos, winemaker at William Heritage, this Chardonnay was treated similarly to how he makes all of his Chardonnays. “I like the fruit to speak for itself. I simply racked the clean juice to a neutral barrel and pitched Montrachet yeast. I stirred twice monthly for 3 months and kept it topped after that. No malolactic fermentation was allowed.”

The Chardonnays will be available for tasting at the Co-Op’s biannual tasting event, from 3 to 7 p.m. on Sunday, June 3, at William Heritage Winery. Each winery will showcase and pour eight of its best wines for tastings to patrons. All wines poured will be strictly from New Jersey grown grapes, an aspect of New Jersey winemaking that the Co-Op encourages and promotes. Special guest Lenn Thompson, columnist for Wine Enthusiast and owner/writer of thecorkreport.us will give two talks about his observations about the progress of the New Jersey wine industry, and how it relates to those developing elsewhere across the east coast of the United States. A VIP portion of the event beginning at 2 p.m. will feature a winemakers’ panel discussion, in which each winery will present, taste, and discuss their version of the Open Source Chardonnay with the guests. Musical entertainment by the Slicked Up Nines and catering by Innovative Catering Concepts will sell several delicious dishes to round out the event. Tickets are available at www.thewinemakersco-op.com/events.