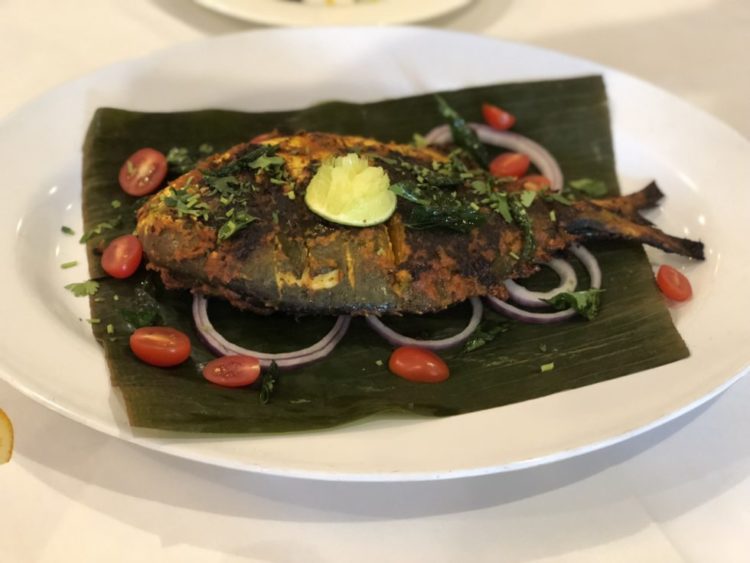 Note: Jersey Bites was invited to visit Mirchi and received a complimentary meal.

Mirchi means chili and Mirchi Indian Homestyle Cuisine in Mount Laurel most definitely lives up to its name, offering plenty of spicy dishes for the adventurous palate. Mirchi, which opened in June of 2017, specializes in Southern Indian food. Staples like dosa (crepes), lentils, rice, and of course—chilis—take center stage.

On a Sunday in early May, Mirchi owners Vikram Mothe and Nikhila Janga invited local food bloggers to sample their weekend lunch buffet, which offers more than 35 dishes. As a lover of Indian food, I’ve dined at most of South Jersey’s Indian buffets, and this one was the largest I’ve visited. I joked with the other bloggers at my table that I’d need three days to eat all the food Mirchi had to offer.

In addition to the size of the buffet, I was also surprised by some of Mirchi’s unique offerings. Mirchi isn’t just your run-of-the-mill chicken tikka masala, naan, and dal makhani kind of buffet. In fact, this buffet featured a number of foods I’ve not only never tasted but had never even heard of before.

Take, for instance, Mirchi’s guntur mirchi bajji, a crunchy shell stuffed with chili peppers, onions, tomatoes, and plenty of spicy Indian flavors, all adorned on a bed of pineapple. When I first tried the bajji, something about its crunchy exterior and the salsa-like filling reminded me a bit of a taco—only more spicy. Timid eaters beware: the bajji, which is a popular south Indian street food, brings the heat. For those who prefer less spice, the cooks at Mirchi will customize almost anything on their menu to suit personal preference.

Working Our Way Through Lunch

Another standout menu item I sampled was yogurt rice (curd rice), which combines yogurt, rice, and several spices, including curry leaves and ginger. I found it to be a good, mild palate cleanser between courses. The flavor was a little bit sour and a little bit salty—and a whole lot of just right.

Even though we had plenty to eat at the buffet, the chefs whipped up a couple more dishes for us to sample. One of those dishes was pomfret (pictured at top), a white fish popular in Indian cuisine. What stood out most about Mirchi’s pomfret was its presentation. It was served whole on a platter adorned with curry leaves and spice. The fish was flaky, delicate, and full of flavor.

After the meal, Mirchi’s buffet included several beverage and dessert options to cool the palate. For diners with a sweet tooth, watermelon ginger juice is a refreshing choice. However, the drink I most appreciated was the hot chai tea. Unlike the watermelon ginger juice, Mirchi’s chai was sparse on the sweet and generous with the spice. Desserts included strawberry kulfi, gulab juman, and fruit salad. The strawberry kulfi and gulab juman together were a match made in foodie heaven.

Give it a Try

Mirchi also offers a weekday buffet and a weekend grand buffet. A la carte dining is offered Monday, Thursday, Friday, Saturday, and Sunday in the evening. Mirchi is BYOB, so if you decide to dine there, feel free to bring your favorite spirit. With such a large buffet offering, Mirchi offers a little something for every diner.

Schedule and offerings are subject to change.

The restaurant also has a location in North Brunswick.