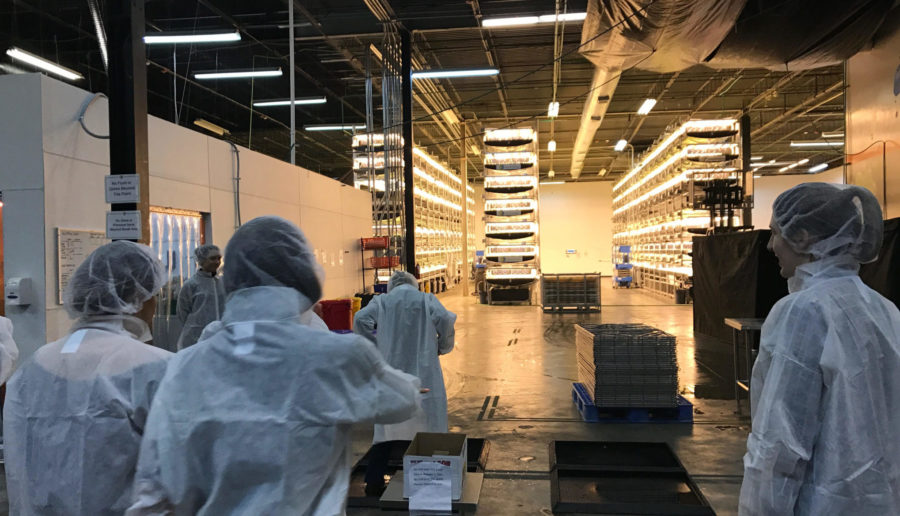 “Doesn’t it feel like we’re walking into the first scene of a sci-fi thriller?” I whispered to the woman in the white lab coat and hairnet (the same getup I was required to wear) as we approached the glowing towers in the distance. I made sure that one chick was way out in front, see her? It’s the same tactic I use in the ocean. Farthest one out gets devoured and gives you time to swim to shore. Take notes, kids.

Anyway, thankfully we weren’t headed into any crazy, sci-fi danger. (Sorry to put you out there, chick in the front.) We were actually taking part in a tour of AeroFarms’ temporary facility located in an abandoned indoor paintball arena in Newark. They left behind the really cool wall art which made the whole experience feel like the weirdest party I’d ever been to. 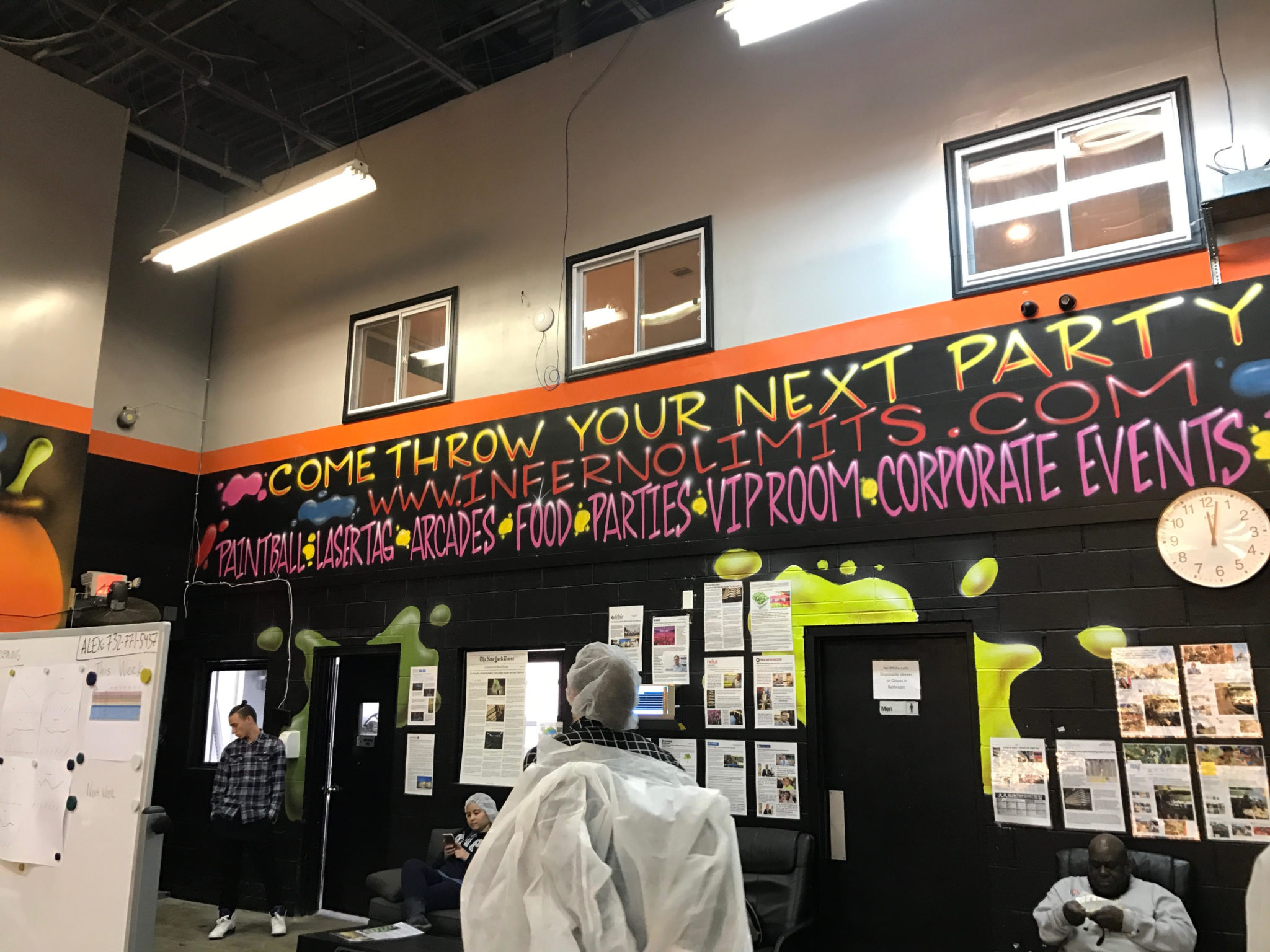 The aforementioned glowing towers were actually the vertical LED illuminated stacks of baby leafy greens thriving under perfect conditions, getting ready to be harvested and sent off to local grocery stores. 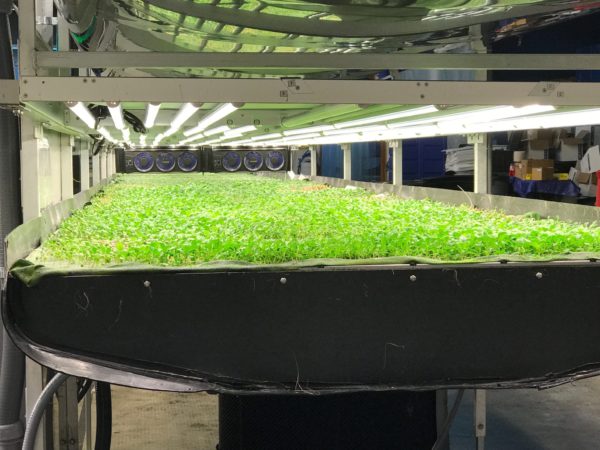 AeroFarms’ noble and awe-inspiring mission is to combat our global food crisis and bring farming and fresh, nutritious, leafy greens into our world’s food deserts. I’m pretty sure we can all get behind that.

The facility we toured was soon to be shut down and all growing moved to their new facility which is an abandoned steel mill on Rome Street in Newark, where their estimated annual output will be up to 2 million pounds. Currently, the Newark location employs a staff of 126, 60% from the surrounding area, 40% from Newark. Growing food and jobs: well played my friends. Well played.

AeroFarms has projects in development on four continents, with plans to open sustainable vertical farms all over the world in the coming years. The Garden State got lucky when the company chose New Jersey as the site for its beta farms in 2004.

The company claims to use “95% less water than field-farmed food, with yields of 130 times higher per square foot annually.” Those are some pretty impressive stats. And they take out the middle distribution man by growing right where the population for consumption is. It’s crazy clever. 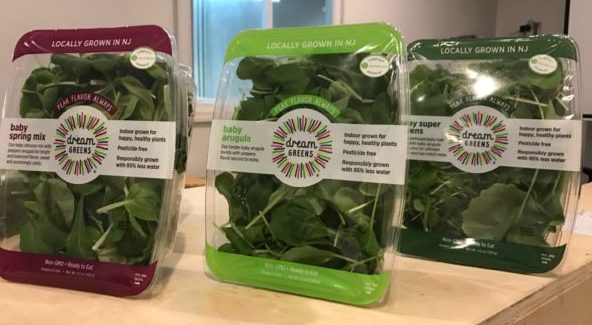 The latest development under the AeroFarms brand is the new line of fresh greens “Dream Greens,” for retail. We were lucky enough to enjoy a brief chew-through of the varying taste profiles of a few of the more than 250 varieties of baby greens and herbs. On the menu for the day was their baby kale, baby arugula, baby ruby streaks (which had a surprising baked potato flavor), baby watercress, and baby bok choy. 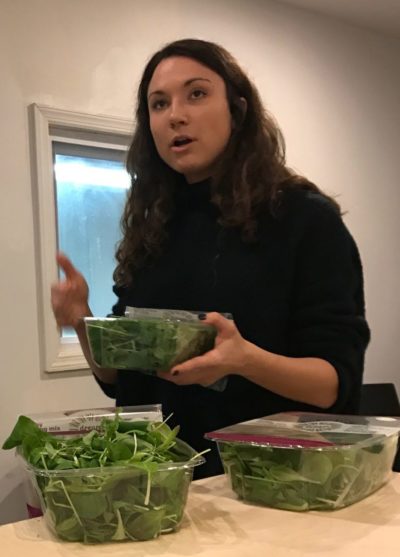 Our guide for the day, Alina Zolotareva, explained the flavors we were discovering and talked about how AeroFarms greens are bred to be more flavorful and more nutritious than your typical fresh greens at the supermarket, which are raised with one goal in mind: shelf life.

With the AeroFarms model, pests are not an issue. Climate is not an issue. Lack of water is not an issue. The seeds are sewn on clothes made out of recycled plastic bottles and are used over and over again for germinating seeds. Plants grow faster in this environment which means the farm can yield more harvests per year than the traditional farm. I told you, it’s the farm of the future. There’s so much more I could go into, but it’s all on the website for if you’re looking for a deeper dive.

If you are looking to buy Dream Greens, which I highly recommend, check out the store locator here. AeroFarms currently supplies the NY-Metro area via brick-and-mortar retail partners including Whole Foods and ShopRite, as well as via FreshDirect to Connecticut, Washington, D.C., and Philadelphia.

I plan on keeping a close eye on this company and the company’s progress. Rumor alert: Next stop, Camden!