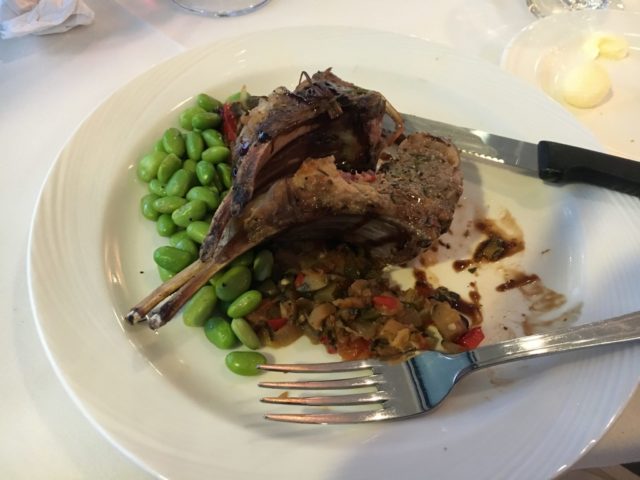 When I heard that Hawk Haven Vineyard & Winery was going to offer a wine-paired dinner, I was quick to jump at the opportunity (even before I learned that it was going to be held at the Ferry Terminal in Cape May, with sweeping views of the water). I imagined the possibilities of viewing the sun setting over this beautiful scene. As it turned out, I had to settle for liquid sunshine, provided by Todd Wuerker, winemaker at Hawk Haven. The weather did not cooperate with my ideal picturesque vision. Fortunately, the food and wine did live up to my idyllic expectations and were beautifully presented in the Sunset Lounge.

The food was creatively put together and beautifully presented by John Schlaner, the Ferry’s Chef. Schlaner and his staff have offered sunset wine lovers’ dinners and many special events over the past decade or so. The first of these wine events were cruises held in 2006 and have been very popular since then. In 2014, they embarked on their first land-side dinners, their first beer dinners and later, wine dinners. 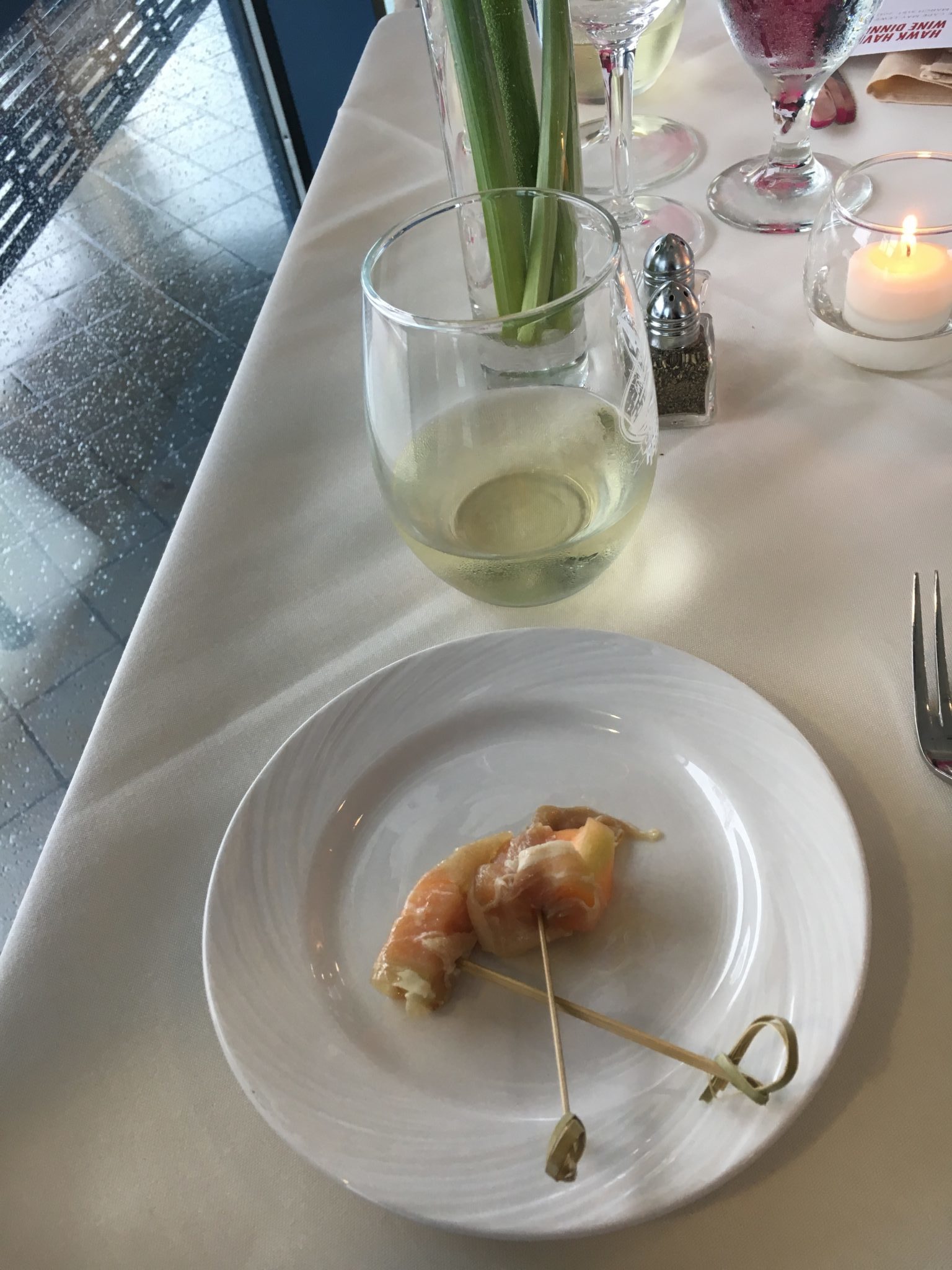 Our host for the night was Todd Wuerker, who introduced the wines as they were being served. We arrived a few minutes late due to the bad weather. We missed the first hors d’oeuvre (pot stickers, pictured), but were served the next—prosciutto and melon (as tasty as it was attractively presented) in short order. Next came a warm stuffed mushroom in phyllo dough, rich and delicious. The third hors d’oeuvre was a warm spring roll with duck sauce. All of the hors d’oeuvres were paired with Hawk Haven’s Dry Riesling Signature Series, 2015—wonderful on its own, but nicely enhancing the food, thanks to the versatility of the wine.

The appetizer may have been my favorite course of the night: A generous, rich version of Coquille St. Jacques, enveloped in phyllo dough. It was exquisite and paired with an equally rich and creamy Chardonnay, Outer Coastal Plain, 2015. I commented to Wuerker that the Chardonnay was fantastic and he shared that he was very pleased with it and that it was an excellent vintage with a subtle oakiness. (They also make an unoaked Chardonnay.)

Our salad was a mixture of greens, a trio of cheeses, poached pears, brioche croutons and Sauterne vinaigrette. This course was, thankfully, light but wonderful. The salad was perfectly paired with Hawk Haven’s Dry Rose, Signature Series, 2016. While rose is not one of my favorite varietals, the flavor profile of this one was a great match with the mosaic of flavors in the salad.

The entrée (pictured at top) consisted of two huge, thick, pan seared lamb chops, cooked to perfection (for me, medium-rare). The chops were accompanied by edamame beans (fresh and retaining just a little crunchiness) and a small dollop of ratatouille, adding a nice acidic flavor. This course was paired with the Proprietor’s Red Blend, 2014 (equal parts Cabernet Sauvignon, Syrah, Merlot and Cab Franc). The red blend had enough structure and backbone to stand up to the rich, flavorful lamb chops.

The fifth and final course was our dessert—chocolate mousse with white chocolate shavings. This was paired with Hawk Haven White Port, 2008. Both were sinfully good. I was not aware that Hawk Haven made a port-style wine. This one is not available to the public at their tasting room, but Wuerker brought it out of his personal cellar to share. It and the mousse were delightful.

Todd Wuerker’s comments and insights about the wines were helpful and instructive. He also proved to be a great ambassador for his wines and the whole project at the ferry. He went around the room engaging with patrons, asking for feedback and providing further information about the wines.

Portion sizes for each of the courses were just right—not too small and not so big as to leave the diner with feelings of overindulgent remorse. Surprisingly, the same can be said for the wine pours. Many other wine-paired dinners which I have attended were just plain stingy with the wine, especially to accompany the entrée. Of course, this is often a ploy to encourage patrons to purchase another glass or bottle. This was not an option here, so I was thankful that the pours lasted through their accompanied course of food.

This dinner was a complete success, a feeling I believe that is shared by the 50 or so other patrons present. I would heartily recommend future Sunset Dinners or Wine Dinners held at this venue. The chef’s creations were quite good and their choice to reach out to the local winery, Hawk Haven (located in Rio Grande) was a super choice, with its excellent and deep bench of wines to highlight and pair for this dinner. 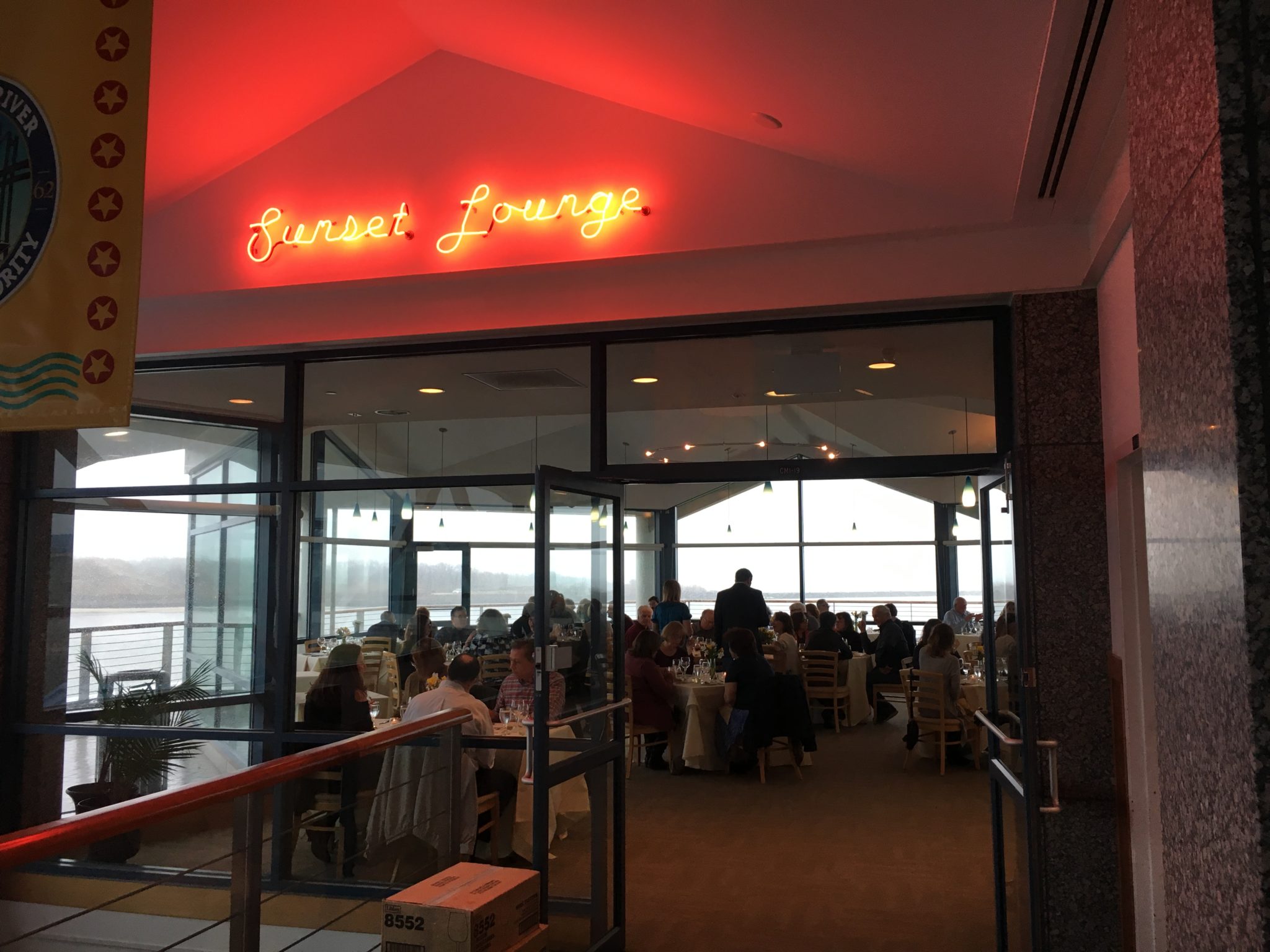