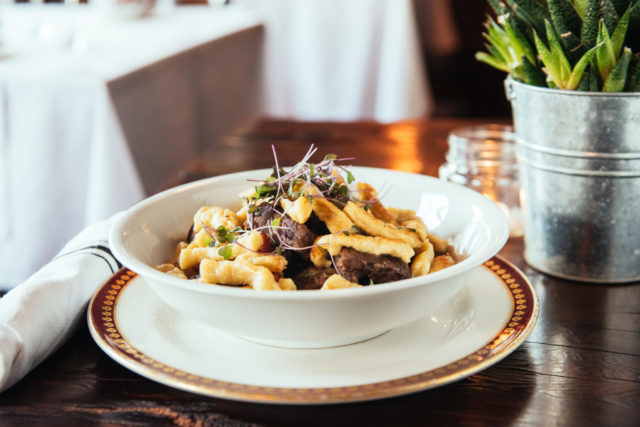 Note: Jersey Bites was invited to visit Russell & Bette’s and our writer received a complimentary meal.

It’s hard to not be curious when one of the most well-known chefs and restaurateurs in Monmouth and Ocean Counties takes over an equally well-known restaurant, spruces it up, and turns it into something that’s entirely new, but just as timeless.

In March 2016, the Marilyn Schlossbach Group acquired Rumson’s What’s Your Beef? steakhouse and in November, they debuted the venue under a new name, Russell & Bette’s, with a new culinary direction. The new bill of fare is inspired by French and American culinary traditions, featuring interpretations of classic dishes like Moules Frites, Bouef Bourguignon, and Boulliabaisse.

The outside façade featuring white walls and black trim remains the same, while the interior is slightly refreshed with plenty of nods to the past and future (you can’t help but feel Marilyn’s presence as you see succulents adorning every tabletop).

In my own opinion, humble yet classic French- and American- inspired dishes made with ingredients of the highest quality, are the ultimate comfort food, and that’s exactly what Russell & Bette’s delivers. So on a chilly evening, my husband and I headed to this transformed hot spot, hoping to relive a bit of our time in Paris. If you’ve never been to What’s Your Beef? in the past, you’ll find it immediately as its one of the coziest looking restaurants from the outside. Stepping through the wooden door, the inside is just as cozy. Dark wood, lots of eclectic finishings, and warm smiles from both the staff and the diners make you feel like you’ve entered some sort of secret gathering place, or been transported to a home in the French countryside. 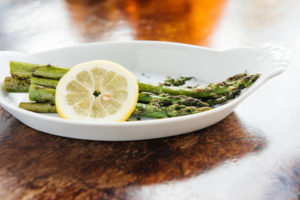 If you have some time, grab a glass of French Pinot Noir, then head to the back room for a two-top that makes your night out immediately intimate. We started off with the asparagus mimosa, a plate of grilled asparagus topped with a runny egg, and a tart Meyer lemon Hollandaise sauce and the vegetarian French onion soup, which would fool any meat eater.

However, the appetizer stunner was their take on the classic Moules Frites. Actually, it turned out to be my favorite dish of the evening. I could have ordered a few of these and been completely content. A warm bowl of sustainable Prince Edward Island mussels, steamed in a broth that allowed the flavors of white wine and garlic to linger on your tongue, imitating a creamy sauce, but still light and fresh. The dish was served with skinny pomme frites (that’s the French way to say french fries, now you’re worldly, too). An absolute must order.

As the waiter gently took the finished plate from me, I set my sights to the Boeuf Bourguignon (pictured at top). It’s a dish that I’ve enjoyed in Paris and make many times throughout the year. Marilyn’s take on the dish is surprising and refreshing. The stew itself is nothing but classic featuring the usual fall-apart beef (she uses brisket), mushrooms, and cipollini onions. The kicker is the buttered spaetzle on the top, which provide a delicious crunchy counter texture to the creamy dish. This works. Russell’s unami burger also deserves a bit of a shout out with an advisory—don’t double dip by ordering the French onion soup appetizer and burger (it’s hard to resist, but it quickly becomes too much of a very good thing).

Finishing off the night, we decided to go big instead of go home. As the bread pudding came to the table, we knew our eyes were bigger than our stomachs, but we’d already made the commitment. Luckily for us, and our stomachs, the bourbon pecan bread pudding took home the runner-up award. Served straight out of the oven in a mini cast-iron skillet (burned mouth be damned!), bits of creamy caramel catch your tongue as you devour forkfuls of gooey bread, chunky pecans, and salted caramel ice cream. Desserts like this are the reason why doggy bags were invented—take home half of your meal so you can indulge tomorrow, too.

As Marilyn and her partners take on this endeavor, one that’s never easy when you’re reestablishing a restaurant that has been entrenched within a small community, its easy to spot the obstacles. But, as I sat in Russell & Bette’s, enjoying my meal, watching the gentlemen next to us linger over a bottle of wine, and listening to the lively group behind me, I realize that all of the elements of success are already here. People may first resist change, but when the change involves fresh farm-to-table comfort dishes in a community friendly atmosphere, it becomes hard to deny the inevitable: this place is here to stay and it’s a change for good.