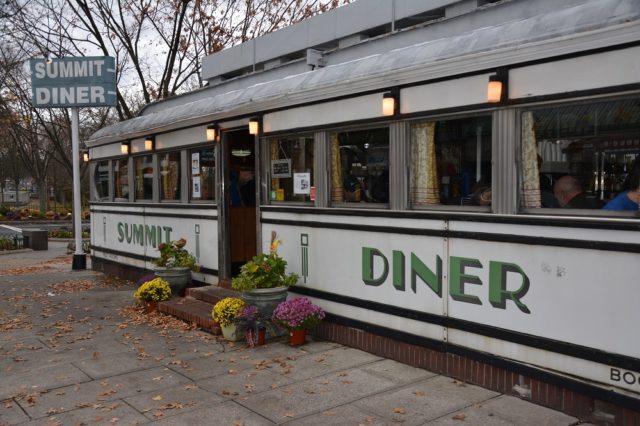 During the holiday season, the best blessings to count are life’s simple pleasures, such as the good fortune to have a meal with a friend at a New Jersey diner. The Sunday before Thanksgiving the phone rang at 9:05 a.m. and I was off to the Summit Diner to have brunch with my buddy Les Cooper.

Les is a member of New Jersey diner royalty. He is the great grandson of Everett Abbott Cooper, the founder of the Paterson Vehicle Company—the prolific builder of the Silk City Diner line. He serves as the family’s keeper of the Silk City archives. The Silk City business launched commercial production of diners in Paterson in 1926.

But don’t be confused. While Les represents the Silk City blood line, the Summit is a Jerry O’Mahony diner, a friendly competitor to Silk City from the late 1920s to the early 1950s. The O’Mahony business folded in 1956 and Silk City ceased operations in 1965. It’s a good guess that each company cranked out over 2,000 diners in their respective heydays. During the 20th century, New Jersey was the diner manufacturing capital of the world. 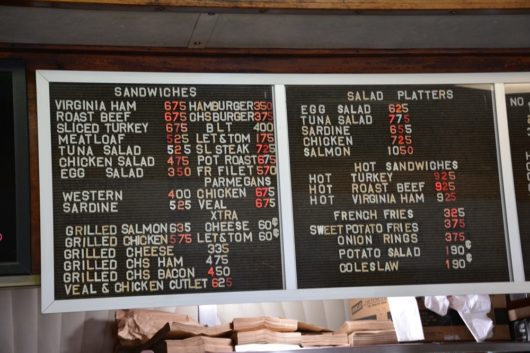 It was a packed house that Sunday morning as the Summit was doing a brisk business, welcoming patrons to its cozy, crowded confines. After a short wait, we landed a booth and the friendly waitress quickly filled our cups with coffee. Les ordered the savory eggs benedict, which was impeccably constructed, while I had my favorite: eggs over easy with well-done hash. Delicious. I must confess that, during the meal, I kept glancing at a most glorious site: a mountain of bacon perched on the grill. Throughout the meal there were multiple generous coffee refills, which fueled our conversation.

Les is a gregarious chap and a spontaneous, high-speed conversationalist—a man with a big smile, golden heart and a zest for life. The topics during our brunch chat ranged from Father Andrew Greeley, the Chicago-based Catholic priest and prolific author who died in 2013; to political observations on the recent dreary, foul presidential election; to the joys of folk music in New Jersey Pine Barrens; to giving thanks to family and friends; to Les’ exuberant fascination with something called the “Steampunk” concept. He tried to explain it to me, but it was a bit difficult to follow. Maybe I was too distracted by Bacon Mountain. According to Les, the “steam” part of the word pays tribute to the energy source that powered engines and machinery 150 years ago. Later that day I googled Steampunk and came up with the following definition, from a website called The Ministry of Peculiar Occurrences.

Steampunk is an inspired movement of creativity and imagination. With a backdrop of either Victorian England or America’s Wild West at hand, modern technologies are reimagined and realized as elaborate works of art and mechanics. Over the years, steampunk has evolved into more than just a sub-genre of science fiction and fantasy. The steampunk concept extends into fashion, engineering, music and lifestyles. Steampunk gets its “punk” not in its dystopian view of the world or even in its gritty edge. The “punk” in “steampunk” comes from going against convention that, through creativity and declaration of one’s individuality; be it through style, gadgets, or attitude, sets one apart.

The steampunk philosophy can be extended to describe the vibe and importance of distinctive, golden-age stainless steel diners, like the Summit—icons of 20th century American industrial creativity. The diner is simultaneously modern and classic. Its Streamline Moderne architecture defies simple definitions, while declaring its individuality. The Summit, as a modular, prefabricated, factory-built structure, was modern and cutting-edge when it first opened. Modern evolved into classic, but the diner’s original modernity exists because it’s classic and has stood the test of time…or something like that.

I had last seen Les two years ago. He was a trusted source when I was doing research for my book on the history of New Jersey diners. Eventually, we met in person over lunch at the gleaming, palatial Scotchwood Diner on Route 22 in Scotch Plains. Finally, he attended the gala Cooper family reunion that was part of Lambert Castle’s exhibit on Silk City Diners, which was held at the stately Paterson museum in the fall of 2014. 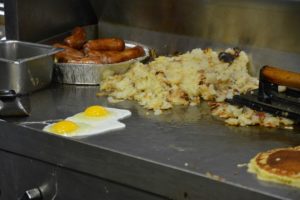 As a vintage eatery—built in O’Mahony’s Elizabeth factory and installed at the current site in 1938/39—there’s a lot to love about the Summit Diner. It’s been beautifully, perhaps even miraculously, preserved in its near-original condition for nearly 80 years. There is a patina of time that the diner wears well—from its wooden walls and fixtures, to its tile floor, to its pressed-plastic-letters menu display. The flat-top grill sits right behind the counter, so patrons can see, hear and smell their order being cooked.

The tight geometry of the Summit’s interior space, along with the many hungry patrons that come and go, makes for a friendly, crowded interior environment. Conversations cascade, the grill sizzles, cell phones buzz, dishes and cups clink, strangers exchange smiles and small talk. This is the theater and chemistry that percolates at Jersey diners. As one insightful diner owner once told me: “when you visit a diner, food is only half the meal.” 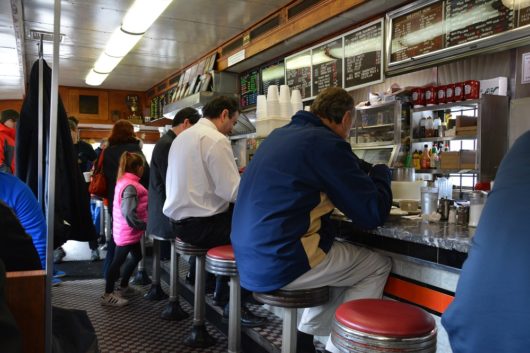 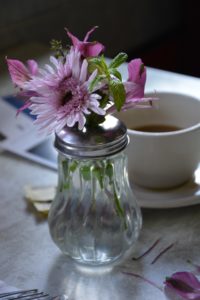 On this chilly Sunday morning, both halves of brunch at the Summit Diner combined to create a most satisfying experience to warm mind, heart, body, soul and stomach. Les and I said goodbye and walked our separate ways, with the promise of another meal and another spirited conversation on another day at another New Jersey diner. I’m thankful for that. I’m also thankful that now I have a full appreciation and solid understanding of the Steampunk movement. Well, at least I think I do. Maybe Les can explain it to me again, the next time we get together.

Michael C. Gabriele is a freelance writer and the author of The History of Diners in New Jersey, published by The History Press.