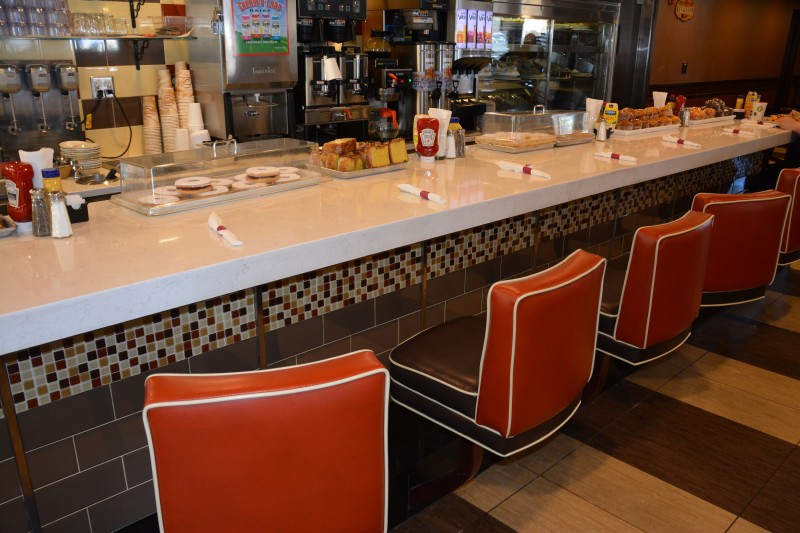 In the wake of Winter Storm Jonas, surrounded by deep snowbanks, chilled to the bone by frosty winds, and shielding my eyes from the harsh, early afternoon sun glare, I ventured, unafraid, into the ancient, mystical land of Hibernia in search of a hearty meal to warm the cockles of my heart. Actually, New Jersey’s Hibernia—an unincorporated village in Rockaway Township—may not be all that ancient, but it does have an extensive 300-year history, according to ironminers.com. In the early 1700s there was a string of iron mines and a forge, known as the Hibernia Furnace, which “provided shot and ordnance for the Continental Army during the Revolutionary War.” Cool.

However, there’s nothing ancient about the Hibernia Diner. As a matter of fact, it is quite modern in its exterior design and colorful interior décor. Beginning on Sept. 1, 2014, the diner was stripped bare to its steel skeleton and completely rebuilt, reopening on April 1, 2015. The construction project is documented on a YouTube video. The “old” diner’s big green awning over the front entrance, arched windows, and white, exterior Mediterranean rocks all have been discarded in favor of attractive, three-tone, exterior brickwork, tall shaded windows, abstract horizontal and vertical stainless steel trim, and a dazzling orange Hibernia Diner sign, which trumpets its around the clock, 24-hour service. A generous portion of thin, grilled chicken slices, expertly seasoned, were piled high on a bed of fresh spinach, goat cheese medallions, walnuts, dates, Kalamata olives, topped with a pomegranate vinaigrette dressing—a well-orchestrated symphony of hot and cold flavors and textures. Needless to say, and as my photos revealed, I enjoyed every bite. It was a sumptuous meal, for sure. Bravo. The coffee was excellent. I had two cups, but decided to skip dessert. The service was prompt, professional and friendly.

Other specials of the day included a brisket of beef platter, Yankee pot roast, beef goulash, a breaded chicken and eggplant hero sandwich on Ciabatta, a Texas chili cheddar burger, a brisket of beef sandwich, and a shrimp and avocado wrap. Besides lentil, the soups of the day included chorizo, corn and black bean, chicken pasta, onion, and matzo ball.

The diner’s eye-catching interior design featured clean lines, warm green/ochre earth tones and big windows that brightened the spacious dining area and ambience. This was a comfortable dining environment. Like many site-built diners, the Hibernia is a marriage of the restaurant/diner concept. Give the owners credit—while the focus is on booth and table service, they were wise enough to maintain a fair-sized counter area for customers on the go, as any honorable diner should. Very thoughtful. Thank you.

As I stood to photograph the room, one smiling chap called out for me to take his picture. “Why should I do that,” I asked, playing along. “Because I’m famous,” he said with a wink. That’s when his wife chimed in with a reality check: “Yeah, he’s famous, and he’s a legend in his own mind.” They said they were loyal patrons of the diner and were pleased with the new design. When it comes to diners, the locals usually know what’s up. They also create the cheerful vibe of the place.

What else do I know about “anything Hibernia” besides this gem of a Jersey diner? Well, not much I’m afraid, so I did some Googling. I learned that the name Hibernia was taken from ancient Greek geographical accounts. The Roman historian Tacitus, in his writings, makes a reference to the island Hibernia. The Ancient Order of Hibernians, America’s oldest Irish Catholic Fraternal Organization, was founded in the coal-mining region of Pennsylvania and New York City in May 1836.

My humble recommendation is that Hibernians and non-Hibernians alike, from hither and yonder, should flock to this neat outpost in Rockaway for an honest, tasty meal. Owners Sam and George Matthews, according to information posted on the diner’s website, have operated the Hibernia Diner for more than two decades. They are to be commended for creating a most impressive, modern diner in northern New Jersey. Can’t wait to see and taste what good eats the next 20 years will bring.

All photos by Michael Gabriele. Michael C. Gabriele is the author of The History of Diners in New Jersey, published by The History Press/Arcadia Publishing.