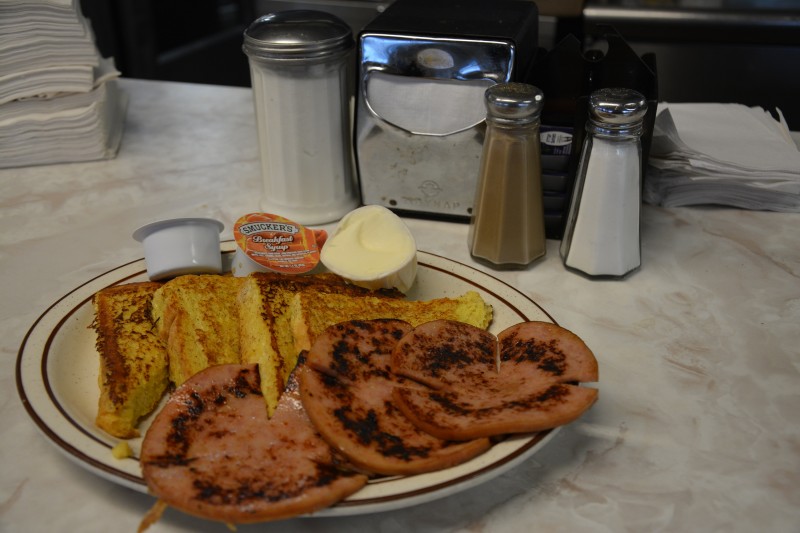 ‘Twas the Wednesday before Christmas,
And all through the Bendix Diner,
The flat-top grill was sizzling,
Nothing could be finer.

It was a mild, gray, late-December (2015) morning. Corporate jets were landing in nearby Teterboro Airport, knifing their way through the fog. Tractor trailers were highballing along Route 17, north and south. The sound of a commuter train horn, running along the Pascack Valley Line, echoed in the distance. Time for breakfast at the Bendix Diner.

The funky beanery sits on its triangular island in Hasbrouck Heights, at the intersection of Routes 17 and 46, just as it has since 1947. At one point in the late 1930s, Teterboro Airport was briefly renamed Bendix Airport, in honor of the Bendix Aviation Corporation, which had a manufacturing facility adjacent to the air field. That’s the inspiration for the diner’s name.

The Bendix has been featured in books, photographs, paintings, blogs and videos. It’s a fixture in northern New Jersey’s built landscape; a familiar, enduring roadside attraction. Fair warning to all you arrogant, upper-crust, trickle-down, one percenters and bashful, wide-eyed, fair-haired Jersey tourists: keep going. Don’t stop. This joint ain’t for you. There’s a McDonald’s up the road, in Paramus. The Bendix was built by Master Diners—the masterpiece of the company’s “Enduro” line. Master, which was founded in 1940 by Arthur Schelling and his sons George and Bill, built diners al fresco at the family compound in Pequannock. When the diner manufacturing business faded in the late 1950s, the Schellings redeployed their stainless steel skills to construct Carvel ice cream stores. Arthur died in 1961 and the brothers retired eight years later. George passed away in January 2013, just six months shy of his 100th birthday. Today family descendants still reside in Pequannock and remain proud of the Master legacy.

In May 2013 this reporter had the distinct honor of meeting Bill Schelling. When asked whether, 75 years ago, he and his brother and dad had ever imagined that their handiwork would one day become a revered structure—an icon of retro culture fascination—Bill modestly shook his head. “We didn’t think it was anything special,” he said. “We were in business and we were building diners that our customers wanted.” Throughout the 1940s and 1950s the Master crew worked outdoors in the Pequannock yard, year round, building diners based on blueprints drawn up by Goethals Van Lenten, Arthur Schelling’s son-in-law. “The diner business was feast or famine,” Bill recalled. “Either we had too much work, or not enough.” Bill said he was the sheet metal guy, bending, cutting and pressing stainless steel. I think I spotted his fingerprints on one of the window frames.

Because I had to start budgeting stomach space and calorie intake for the upcoming Italian family feast on Christmas Eve and big spread with the in-laws on Christmas day, I chose French toast and Taylor ham for breakfast, with a cup of coffee (pictured above). I sacrificed and did without a side order of home fries. The French toast was thick and dense; the Taylor ham was juicy, chewy and salty good. Very nice. Coffee? Not bad.

A small string of Christmas lights hung in the front window, creating variations on a theme—a sweet, slightly melancholy, an ever-so-faint holiday accoutrement. At the far end of the counter, four blue-collar regulars were engaged in spirited banter, giving each other “the business.” Actually, they really were giving each other the business—tracking investment strategies, that is. One guy had his laptop computer open and announced that the market was up 131 points. “I only buy dividend stocks,” he declared. “It’s the gift that keeps on giving.” An amigo inquired to the market watcher about the status of Apple stock. “It’s up 25 cents—no wait, 31 cents,” he replied.

One of his economic associates asked if he would back tomorrow for breakfast at the Bendix. “Yeah, sure, I’ll be here. Tomorrow is Christmas Eve, right?” One of his chums, smiling profusely, shot back: “Yeah, all day.” At that point, the good-natured stock analyst with the laptop stood up and grabbed his buddy by the scruff of the neck, shaking him in slow motion. Good cheer filled the air.

Closer to where I was sitting, a woman wearing big-framed glasses paid her bill. “Same old, same old. Always good,” she announced, referring to the egg platter she just joyfully consumed. An elderly woman, wielding a cane, briefly went into the diner’s back room, where an arsenal of well-worn pots and pans hung from the ceiling, like an abstract art installation. “I have a little trouble walking,” she whispered to me, shuffling along with a shy grin. A 40-something man and woman, obviously in love, walked in and parked themselves at one of the booths. Cute couple. Two guys with baseball hats followed and sat next to me at the counter. They ordered egg sandwiches to go. Three more guys, also wearing baseball caps, soon followed and sat at a table in the side dining area. Next time I guess I’ll have to bring my Yankees hat. Spring training games start on March 2.
There was time for a second cup of coffee, a moment to meditate on the hypnotic, unending traffic flow speeding by on either side of the diner. As Uncle Floyd once tenderly sang: “…and Route 17, the traffic there is mean, deep in the heart of Jersey.”

After paying my bill, I walked out of the Bendix Diner and headed towards my car. Standing in the parking lot, I turned and stopped to enjoy the blue and pink neon lights glowing in the morning mist. I thought about chestnuts roasting on an open fire, but today Jack Frost wasn’t nipping at anyone’s nose (apologies to the great Nat King Cole). It was 58 degrees, deep in the heart of Jersey, on the Wednesday before Christmas.