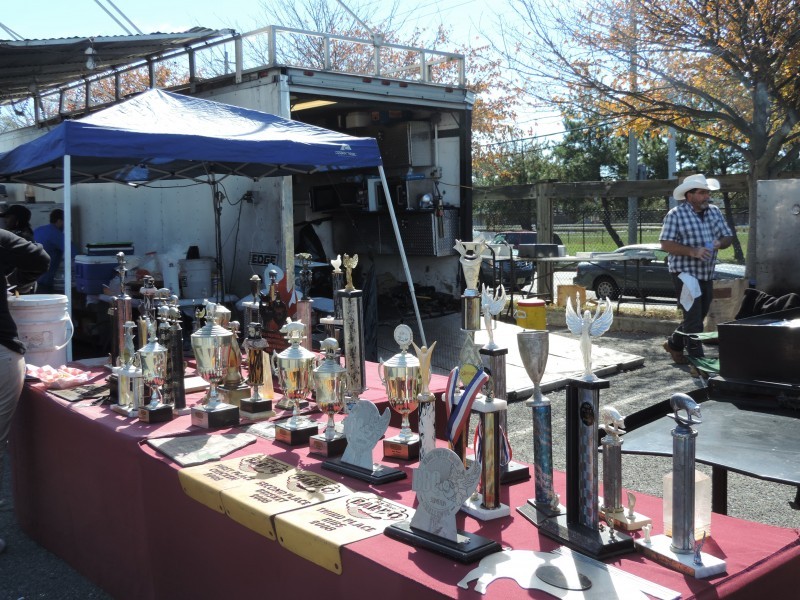 Dan Hodgins was  having some fun modeling a giant chicken head for the crowd at the 5th Annual Smokin’ Hot Atlantic City BBQ Championship at the Golden Nugget, earlier this month. But when it comes to barbecue, Hodgins’ Fair Lawn-based Chicken Chokers BBQ team is all business.

With the title of The Grand Champion and $15,000 in prizes at stake, this is serious barbecue. Forty-six teams from around the country set up their smokers for the weekend of October 9 in AC, pulling an all-nighter Saturday, smoking and grilling for Sunday’s judging.

Every 30 minutes, the competitors turned in their finest barbecued chicken, ribs, pork butt, brisket, and sauce to the panel of Certified Barbecue Judges. Not just anyone can judge a BBQ competition. Event organizer Ron Cates explained that each of the 60 judges is trained and certified by the Kansas City Barbecue Society. Six entries at a time are evaluated through a blind tasting for taste, texture and appearance. While great barbecue generally brings to mind Texas, Memphis and the Carolinas, more than 40 New Jersey barbecue teams are registered with the KCBS. Upper Township’s Wayne Shelton and his Cookin’ Commandos  (“Chicks dig ’em, pigs fear ’em”) donned their camouflage aprons for their third year competing in AC. Their specialty barbecue sauce garnered fifth place, in the wake of a second-place finish at the 2015 New Jersey State Barbecue Championship in Wildwood. The crew from Tom Tom Bob-A-Que in Medford (“Come Sniff Our Pits”) relaxed with the Eagles game on their flat screen after a long weekend of grilling. Newcomer South Jersey BBQ came in from Pitman, fresh off their very first competition in Seaside Heights’ Que By the Sea. And Pit Boss Dan’s Chicken Chokers returned to Fair Lawn with a second place finish in the Chicken category. Like many of the BBQ teams, all four are available for catering parties or events.

While the competitors awaited their scores, Al “Bubba” Baker charmed the crowd sampling his Bubba Q’s Deboned Baby Back Rib Steaks. The former NFL defensive lineman and owner of Bubba Q’s World Famous Barbeque in Avon Lakes, Ohio has partnered  with Shark Tank’s Daymond Johnson, who calls the boneless ribs the best investment he’s made. The marinated and dry-rubbed ribs are fully-cooked and ready to be microwaved or grilled—as Bubba told the crowd, “Just heat eat and eat it…no mess, no stress.” The tender ribs are available at Rastelli’s Market Fresh in Marlton and Deptford and online. Another barbecue entrepreneur, Jersey native Glenn Gross, offered some free samples from his Fat Jack’s BBQ and his Fat Jack’s Hot Sauce and Barbeque Sauce. The Philadelphia restauranteur has appeared on Destination America Network’s BBQ Pitmaster and has won over 200 barbecue awards and Grand Championships. Gross, who got his start in the restaurant business in Vineland in 1993, now has several Pennsylvania Fat Jack’s and a planned New Jersey location in Hamilton.

The Sauce This BBQ team from Easton, Maryland, was crowned the Grand Champion and will compete at the Jack Daniel’s World Championship in Lynchburg, Tennessee. Portions of proceeds from the event benefitted the Food Bank of South Jersey.