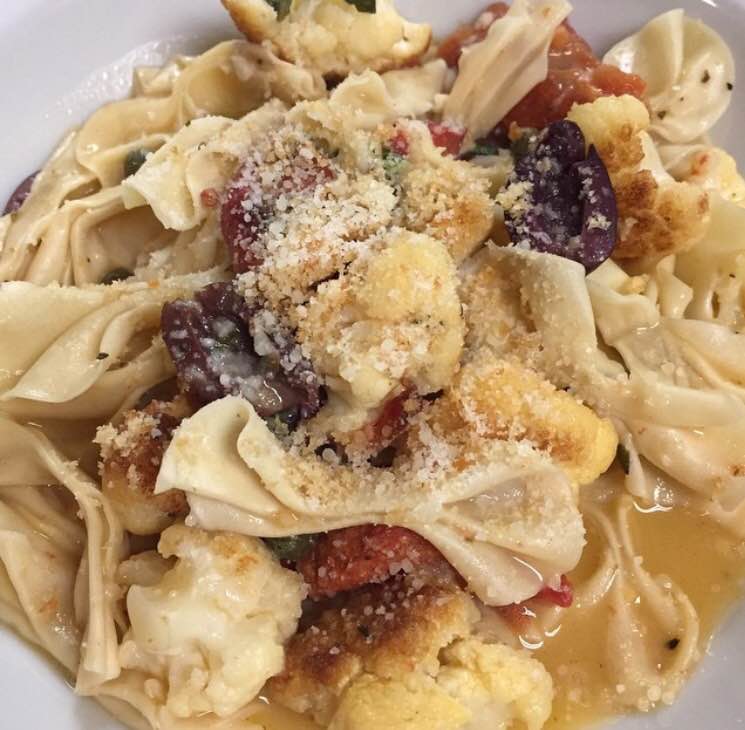 Out to celebrate our anniversary about a month ago, my husband and I looked for a restaurant that would properly complete the evening. As we considered our usual haunts, I continued to shake my head, no. I wanted something special, something memorable, to commemorate our time together. We took a drive down to Highlands and came across Porcini. I had never heard of it and quickly investigated. Five stars popped up over the screen. “The food was delicious.”

“The food was incredible.”

Were these reviews too good to be true? We were going to find out. Turns out, they were right on target. Every single one of them.

Walking into Porcini Italian Trattoria is reminiscent of walking into a sidestreet restaurant in the middle of Florence. Small, cozy, and welcoming—and that’s just the atmosphere. Wait til the food comes out. Greeted with open arms, we were quickly seated and then realized that it was a BYOB. (Noted for next time.)

To be honest, I was a little skeptical. Maybe all those five star reviews were from friends and family. Could it really be that good? Little did I know that this culinary adventure would be one of the most surprisingly delicious meals I’ve had recently.

First up, the mushroom tart. (When you’re dining at Porcini, you must eat porcini!) A flaky tart, warm goat cheese, shallots, an array of mushrooms, topped with a drizzle of balsamic glaze and a hefty helping of arugula. I was in heaven. According to our server, it’s a fan favorite and I can see why. For our main courses we ordered the farfalle pasta dish with spicy cauliflower, tomatoes, capers, and olives in a garlic-parmesan broth and the tagliatelle with pomodoro sauce and ricotta cheese. A classic. If you screw this up, there’s no coming back in my book. When our pasta dishes arrived, that’s when the excellence of Porcini’s magic hit me. The pasta was homemade. All of it! Nowhere on the menu was that even mentioned; yet here they were, surprising our taste buds with homemade treats. There’s just something about homemade pasta that makes what would be a normal dish completely extraordinary. The time, the effort, and let’s be honest, the love that goes into making pasta is transferred directly into the dish. Just one bite of farfalle was like getting a big hug from an Italian grandmother. Except, behind the kitchen door there’s no Italian grandmother. “This is how we eat at home,” says co-owner Alexandria Mahon when I later spoke with her about what makes Porcini pop. “Simple, really flavorful dinners with candles. We’re a restaurant that’s small and intimate. We want you to feel like you’re dining with us at home.”

When I mentioned in the beginning that dining at Porcini on our anniversary wasn’t a coincidence, I meant it. As corny as it sounds, we wanted to celebrate a day that we remembered as being a day filled with love, with a dinner that was also filled with love. Porcini is a story of both love of food and a love story. Mahon and Atamian may look young (well, they are young, at 26 and 29), but they’ve both been in the restaurant business for over a decade. Mahon began working as a busser at the Bay Ave Trattoria where Atamian was a sous chef over 10 years ago, that’s where the initial romance began. After Superstorm Sandy, Bay Ave Trattoria closed and Atamian worked in the kitchen at Nicholas in Red Bank for five months before taking the head chef position at Fresh in Highlands. Two years later, Atamian and Mahon decided to follow their dreams, take the risk, and open an Italian American restaurant. They moved into the space that used to be the Pancake House and opened on July 18. We were there one month later and I’m still talking about it. Other highlights of the menu include the mushroom fettuccine, crab cakes, and the pork osso buco, which Mahon says on a Saturday night, is not surprising to see on every table.

“I’ve been giving up my entire weekend to work in the restaurant business since I was 15 years old,” says Mahon. “I love this job. We’ve been together for seven years and our ultimate goal for the past six was to open up a restaurant that we can pass down to our family in the future.”

And that’s what it boils down to. You’re eating love and that’s why they deserve every five-star review they’ve received. Oh, and maybe the goat cheese cherry gelato that capped off our dinner that evening had something to do with it as well. I’m telling you, this is what foodie fairy tales are made of.