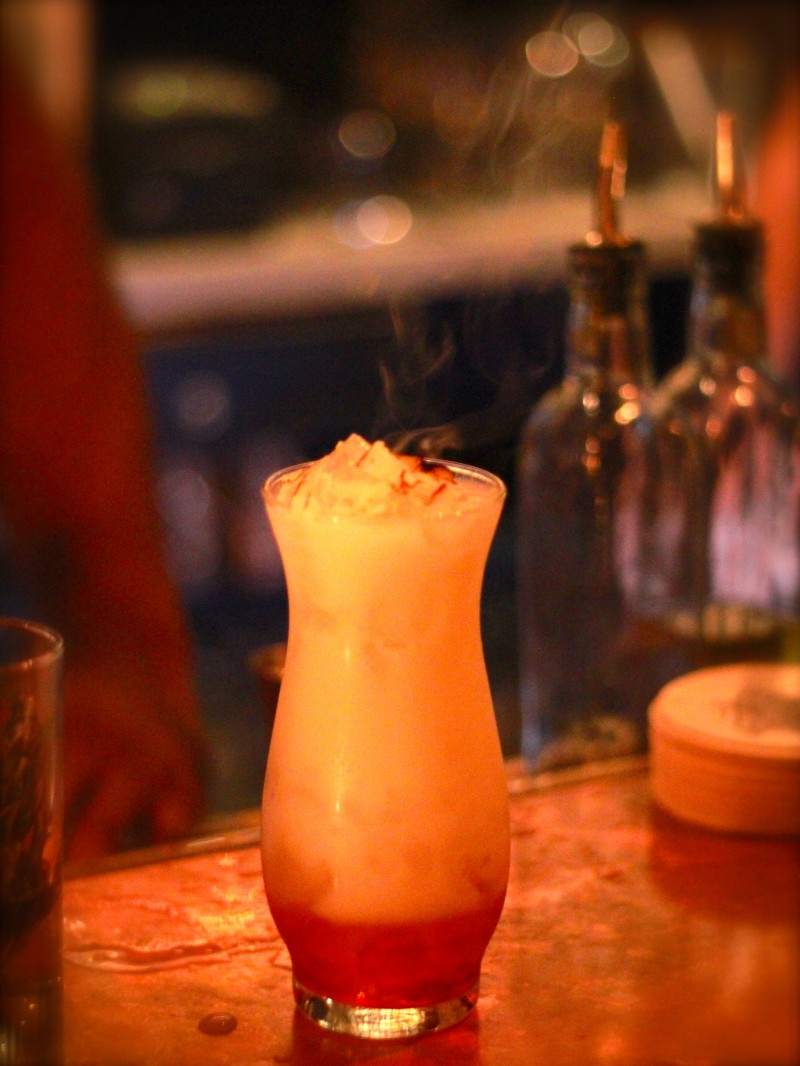 Disclosure: The food/beverages covered in this post were provided to Jersey Bites for free. As always, all views and opinions are the writer’s own.

I recently received an invitation to visit dullboy, a unique cocktail bar located in the heart of downtown Jersey City. With its laid back and endlessly intriguing atmosphere, dullboy is the first bar of its kind in the area. Upon my arrival, the first thing I noticed was one wall made 3-D by being covered entirely with novels. Once seated, I couldn’t help but turn my attention to the beautiful vintage typewriters mounted on the walls beside the cozy, intimate tables. When we were given menus, we learned that the bar’s cocktails are all named after famous heroines in literature. I then asked for the story behind the name ‘dullboy.’ As an English major and language arts teacher, I had to try not to geek out. The trendy and totally awesome literary overload that defines this bar really makes it stand out from others in the area.

The bar is inspired by, and heavily references, Stephen King’s book The Shining. It’s clear that the owners of dullboy stand by the novel’s famous proverb, “all work and no play makes Jack a dull boy.”  Upon entering dullboy, it’s time to hang with friends, have some laughs, and enjoy one (or a few) of the sophisticated and classic cocktails—we tried The Mina, The Roxy, and The Emma, dullboy’s signature flaming cocktail (pictured above). All delicious!

Sean O’Brien, one of dullboy’s five owners, provided us with wonderful hospitality, and explained that thus far, the main attraction of dullboy has been the signature cocktails—a sort of “drinks first, food second” ideology.

Even so, I must commend their food with a shoutout, because everything we tried was absolutely delicious! Executive Chef Brian Dowling, also an owner, has provided dullboy diners with a creative variety of menu options. My top recommendations from the menu: oysters, tuna tartar, and the beet salad. Also worth trying: the bone marrow burger, the BLT tacos, and the crispy duck fat potatoes.

Specials are available daily at dullboy, including $1 oysters on Monday (the oyster selection rotates between two east coast and two west coast), $1 Taco Tuesdays, and two daily cocktail specials (one shaken and one stirred). You can also swing by to listen to live jazz on Saturdays from 3 p.m. to 6 p.m.

Next time you’re looking for something cool to do in the downtown Jersey City area, make sure to visit dullboy. Have one of the signature cocktails, eat some savory food, or head there for a nightcap, because they are opened until 3 a.m. on the weekends, which is two hours later than most bars in the area! Thank you, dullboy, for a wonderful visit, and for adding your distinctive brand of hospitality to the culture of the area!