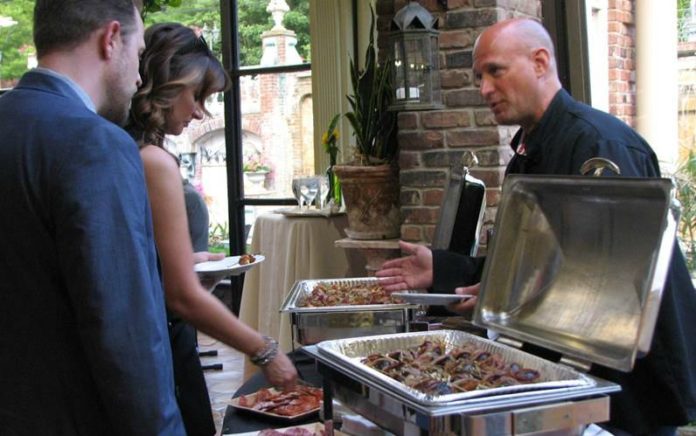 The third annual Montclair Food & Wine Festival (MFWF) kicked off with its Gala on a night that threatened wild thunderstorms. Instead, the rains held off while a different kind of storm brewed inside The Manor’s elegant ballroom – a dramatic confluence of talent, passion, and bonhomie. More than just a celebration of the joy of cooking (and eating), the event continued its mission to raise money and awareness for a great cause. This year’s beneficiary was Intensive Therapeutics, an outstanding nonprofit organization that provides group and individual occupational therapy services to children with special needs.

Melody Kettle, founder and executive director of the Festival, presided over the evening with her usual exuberance. Her catchphrase for the night was “off the hook” and it was a fitting one for a six-course feast that showcased the work of chefs and vintners who elevate the experience of dining in every detail.

A casual reception in the glass-encased atrium featured live jazz, sparkling prosecco, and delicious finger foods provided by FIN Raw Bar & Kitchen and Nicolosi Fine Foods. While guests arrived and began to mingle, the evening’s celebrity chefs including Ariane Duarte, Ryan DePersio, and Francesco Palmieri made quick appearances between dashes to the kitchen to put finishing touches on their specialty courses.

The formal dinner then commenced, with Amanti Vino’s Sharon Sevrens giving a rousing welcome and overview of the night’s wine pairings as the first Austrian rosé was poured. Setting a playful tone, the first course was billed as an “amuse series,” which matched the varied approaches of Orange Squirrel’s Francesco Palmieri, Blu and Next Door’s Zod Arifai, and Chakra and Blue Morel’s Thomas Ciszak with newly crowned Chopped champ Meny Vaknin of Montclair’s hot Mediterranean café, MishMish. A balsamic glazed profiterole balanced atop an overturned coffee cup, which revealed a crisp smoked salmon toast hidden beneath. Diners were instructed to reach for what looked like smooth river stones in the center of the table which twisted open to reveal a thimble-sized mousse. Last, a palate cleansing and entirely surprising Caesar salad ice cream offered the oddly wonderful sensation of garlicky coolness topped by fine crouton crunch.

The courses commenced with Ariane Duarte’s Perfectly Poached Shrimp, which she admitted “is just a fancy way of saying shrimp cocktail,” though its bright lemon aioli and avocado corn salad base took it way beyond ordinary. Ryan DePersio’s pancetta-wrapped bronzini was paired with fantastic deep-fried couscous and asparagus salsa verde. The Huet Vouvray paired with this dish was my favorite of the night – sweet but a wonderful complement to the fish. Chef Mitchell Altholz introduced his spring lamb ravioli with fresh mint and heirloom carrots by describing the great things happening at the Highlawn Pavilion’s farm where his ingredients were sourced. Jockey Hollow Bar & Kitchen made a winning debut at the event this year with Kevin Sippel’s veal cheeks with bone marrow gremolata, fava beans, and pecorino. Rich? Very. Delicious? Indeed. The Italian cabernet blend Sharon Sevrens selected to accompany this dish added the perfect exclamation point to its flavors.

Between courses, a rousing auction ensued, raising thousands of dollars for Intensive Therapeutics and the many kids it serves so well. Items up for bid included dinner in a private home prepared by Ariane Duarte, a weekend spa retreat including use of a brand-new Maserati Ghibli, and VIP tickets to a taping of the Food Network’s The Kitchen.

As a kickoff to the Festival’s weeklong programming, the Gala event proved that the Montclair Food & Wine Festival is continuing to do what it does best: dedicating itself to the art of giving back to the community while celebrating the bounty of talent within its own zip code and beyond.

Peter Culos and I attended the Festival’s Bourbon & Biergarten event on Friday night. The event was held on the grounds of the Montclair Museum and despite the oppressive humidity, attendees seemed to have a great time. (Of course, the bourbon and beer may have played a part in that.) The event featured samplings from more than 25 local restaurants as well as from 10 different breweries and specialty spirit producers. Each attendee received a commemorative glass, which Peter sends kudos for. (You don’t normally get quality glasses at events like this, so this was a welcome surprise!) Our best bite of the night came from 100 Steps Raw Bar, which served two types of crostini, Peter and I were split on our preferences. I adored the shrimp salad crostini with fresh mint and a lime vinaigrette while Peter loved the swordfish nduja with fresh radish and an orange vinaigrette. Runners up for our totally unofficial “Best Bite” awards go to Pig and Prince for its amazing brats and Newark newcomer, BURG, for its damn good sliders. Judging from the line at Kimchi Smoke‘s table, it was one of the night’s favorite stops as well. Best sips of the night, for me, went to the Jersey Artisan Distilling, which served two lovely cocktails featuring light and dark rums. Peter went crazy over the Brooklyn Brewery’s barrel-aged Kriek and also gave props to Ramstein Hefeweizen from Butler.